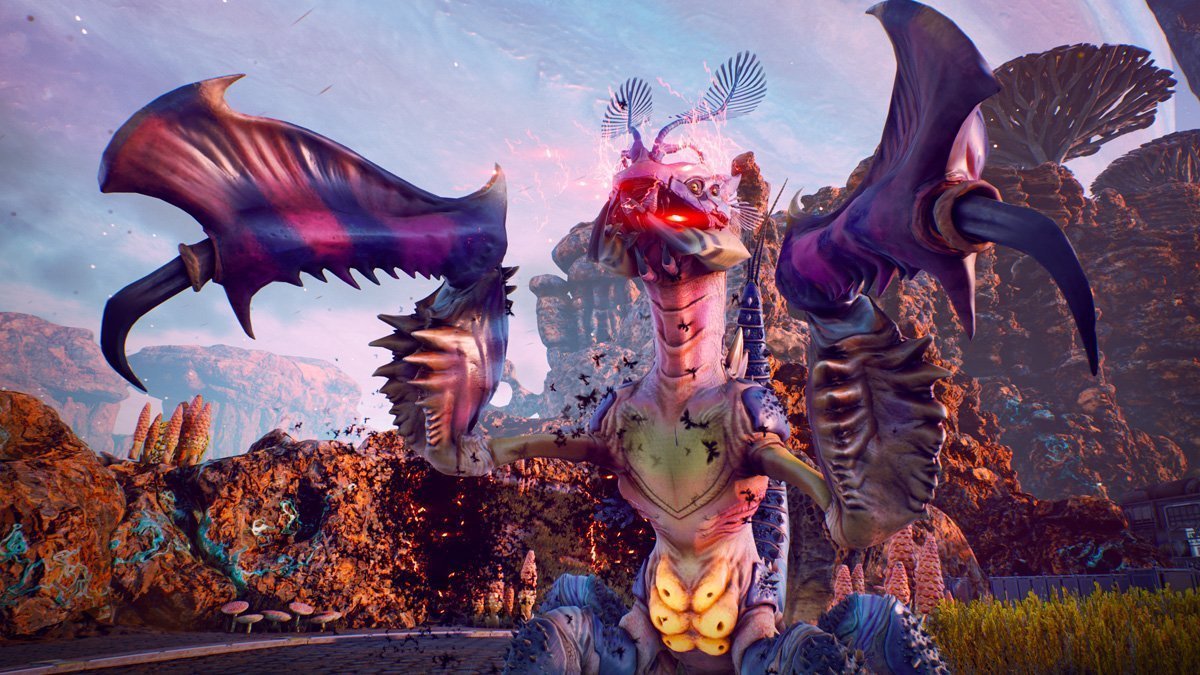 Yes, and with better combat.

Obsidian Entertainment are more than familiar with the role-playing genre, having worked on some of the most critically renowned RPGs over the past 15 years. That list includes the likes of Star Wars: Knights of the Old Republic II, Pillars of Eternity, Neverwinter Nights 2, South Park: The Stick of Truth, Fallout: New Vegas and more. The studio’s success has led it to be acquired by Microsoft late last year, joining the ever-growing number of developers under the Xbox Game Studios division. While it could be some time before we get to see what Obsidian is cooking up as an Xbox exclusive, we certainly don’t have to wait long until the release of its latest opus.

The Outer Worlds is Obsidian’s new first-person science-fiction RPG. It takes place in a distant future where mega-corporations have begun terraforming and colonising other planets. I had the opportunity to play two hours of the game, though Obsidian has made it clear it would like to keep it’s opening a surprise for players. As a result, I can only share my thoughts on the last hour of my time with it.

The planet we found ourselves on in this portion of the demo was called Monarch. I began by exploring the town of Fallbrook, which is populated with many stores and interesting characters. One of those is a shady looking gentleman by the name of Nelson Mayson. This character runs a drug delivery service using sprats (basically giant space rats). These sprats run back and forth transporting drugs through tunnels, however the latest shipment hasn’t arrived. Convenient.

After some investigating you eventually discover that the sprats have been taken and are being looked after by an animal rescue service and you’ll need to make a decision on what happens next. Do you help keep the sprats safe? Tell Nelson where all the drugs are and kill the animal rescue workers to get back the drugs? Or do you lie to Nelson, tell him you couldn’t find the drugs and just keep them for yourself? There are a lot of possibilities in the way the quest can play out and different consequences for the actions you take.

This experience was repeated through all the quests that I managed to come across. There were multiple approaches to the way you could handle the situation, and that is what Obsidian is trying to go for by giving players the choice the play the way that they want.

Your character has a list of attributes and skills which enables you to perform certain tasks out in the world. Strength, intelligence, dexterity, perception, melee, weapons, and dialogue are just a few of those stats that you can put points into which helps shape your character. Every time you level you get a new skill point to spend, and every second level a new perk. By boosting certain attributes you’ll have the potential to open up options like being able to lie to someone during a conversation, or persuade an NPC into giving you an item that you need.

Alternatively, there is a combat approach and ways to get more physical with the interactivity of the game. The Outer Worlds offers a fairly decent shooting system and the weapons I had a chance to use felt great to handle. Enemies that you attack will have damage numbers that pop off to give you an indication of how much harm you are doing to them. Some of these enemies can have weak points to them and so attacking these locations can lead to a huge damage boost that can significantly change the direction of the fight. What makes things a little bit easier is you’re able to combine the shooting elements with your ability to slow down time; that helps you to gain a tactical advantage and precisely hit your targets.

There was a selection of weapons that could be acquired by several means, such as looting enemies or buying them from vendors. These weapons can range from melee items, to handguns, assault rifles, sniper rifles and more. They can be broken down for weapon parts and be used to modify your other guns to make them more powerful. All of your items are stored in your inventory by a weight management system, and like many RPG’s organising this is a key component as you decide what to horde and what leave behind.

The Outer Worlds has companions that you can recruit who follow you around and help you complete your quests. In combat your companions can be guided by using commands to give them orders like attacking an enemy, defending a position or moving to an area. While roaming around these characters interact and have conversations with each other, as well as other NPCs in the world. It is a nice touch and gives you some added insight into who these characters are, and hopefully in the long run a sense of connection to them as you begin to spend hours walking around with them by your side.

One interesting mechanic that I had a short time to mess around with is the disguise system. This allows you to obtain clothing and access areas that you shouldn’t normally be allowed in… at least without alerting someone that you’re trespassing in that location. While disguised, a meter on the screen decreases as your cover starts to wear off. If it depletes you’ll be noticed and be confronted if caught. This will give you the option to talk your way out of it in a few dialogue options. If you’re successful in convincing them then you’ll get another crack at sneaking around – this can be done up to three times. If you fail then things don’t go in your favour, and well you’ll probably end up needing to fight your way out of the area.

Although I only had a short amount of time with The Outer Worlds, it is definitely looking very promising. I really dig the tone which is this dark comedy setting, not really taking itself too seriously. There were some genuinely funny moments that I came across while interacting with the characters which fill the world. What surprised me the most though is just how diverse the choices are when deciding how you want to progress through the story. Obsidian has proven in the past that it is able to create these brilliant worlds and tell interesting and engaging stories inside of them. The Outer Worlds might just fill that empty void left by Fallout 76 which disappointed a lot of people last year. If what we’ve seen so far is a good indication of what the final product looks like, then The Outer Worlds is most certainly a game to keep your eyes out for.

Luke Lawrie traveled to Los Angeles, U.S.A. to preview The Outer Worlds as a guest of Private Division. Travel and accommodation were supplied by the publisher.