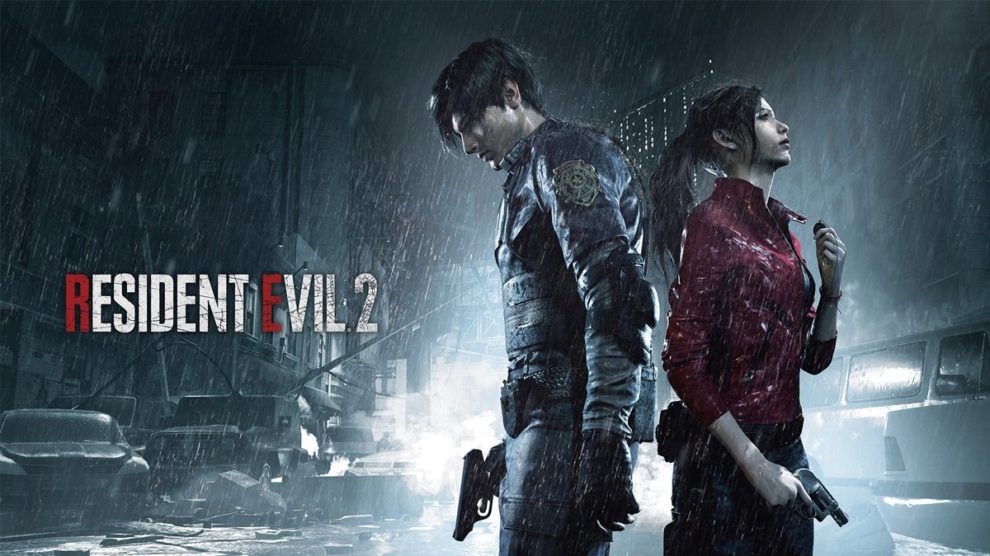 When the original Resident Evil was remade for GameCube in 2002, Capcom didn’t stray too far from its core. Sporting a spectacular graphical upgrade, the remake stayed true to the 1996 release’s fixed camera angles and pre-rendered backgrounds. New content came in the form of tweaked puzzles and a new subplot, but truly, the concept of the Crimson Head zombie is what defined it.

In old Resident Evil titles, killing an enemy meant just that – it was gone, never to return. The Crimson Head flipped this notion on its head; in order to truly dispose of a zombie, Chris or Jill needed to decapitate it with a well-placed headshot or burn it entirely, but a general lack of supplies meant you couldn’t do this with each foe. If you decided to shoot an enemy ‘dead’ and left its intact corpse on the ground, you ran the risk of reanimating it, making it more aggressive and blood-thirsty than before in the process. Simply put, Crimson Heads were a perfect addition to an already solid survival horror franchise.

It’s been a while since 2002; we’ve had many more Resident Evil titles – including a move from survival to action horror and thankfully back again. 2019 is fast approaching, and with it the highly anticipated Resident Evil 2 remake. While managing to stay true to the original, fixed camera angles and pre-rendered cutscenes are gone, making way for a fully realised 3D environment and with a modern, over-the-shoulder camera to go with it. Capcom has gone out of its way to modernise things, using Resident Evil 7‘s RE Engine and tweaking mechanics to cement the game as a survival horror fan’s dream come true. Let’s get into how the 2019 remake’s changes play into that. 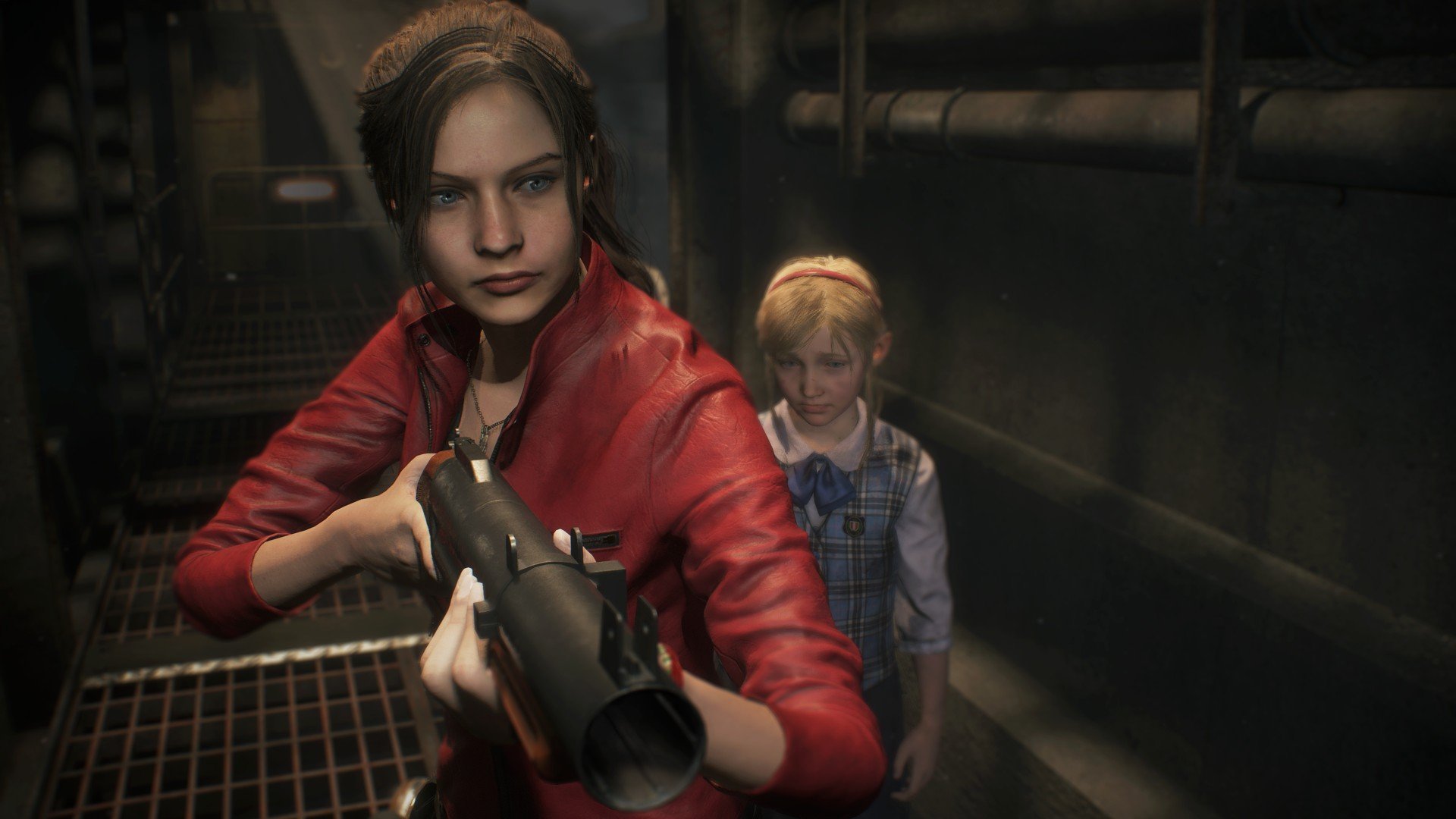 Resident Evil 2 doesn’t have Crimson Heads, nor does it need them. Each zombie in the game is practically a Crimson Head anyway – if you don’t use a Flame round (as Claire) or manage to get lucky enough to make one’s head explode with a headshot (as anyone), it’s eventually going to get back up and lunge at you.

In my four hours of playing as Leon, Ada and Claire, I only managed to decapitate a single zombie using a handgun; waiting until one was on the ground and then dumping ten more more bullets into a corpse sadly didn’t help. If you need to backtrack, it’s all but guaranteed that zombie will be back up and ready by the time you enter that space again. You’d better get used to that now.

I know what you’re thinking — a shotgun to the face will fix that, eh? Sure… but doing that will mean you’ll be constantly low on precious shotgun ammo. Is it worth it?

A big part of Resident Evil has always been about ammo conservation, and the undying undead really throw a wrench into that time-tested strategy. I quickly realised this while playing, doing everything in my power to save bullets and minimise incoming damage. With the run-of-the-mill zombie, you’re generally fine – if you can’t run around it immediately, a couple shots to stagger one will fix that; in a group, a well-thrown Flash Grenade does wonders. 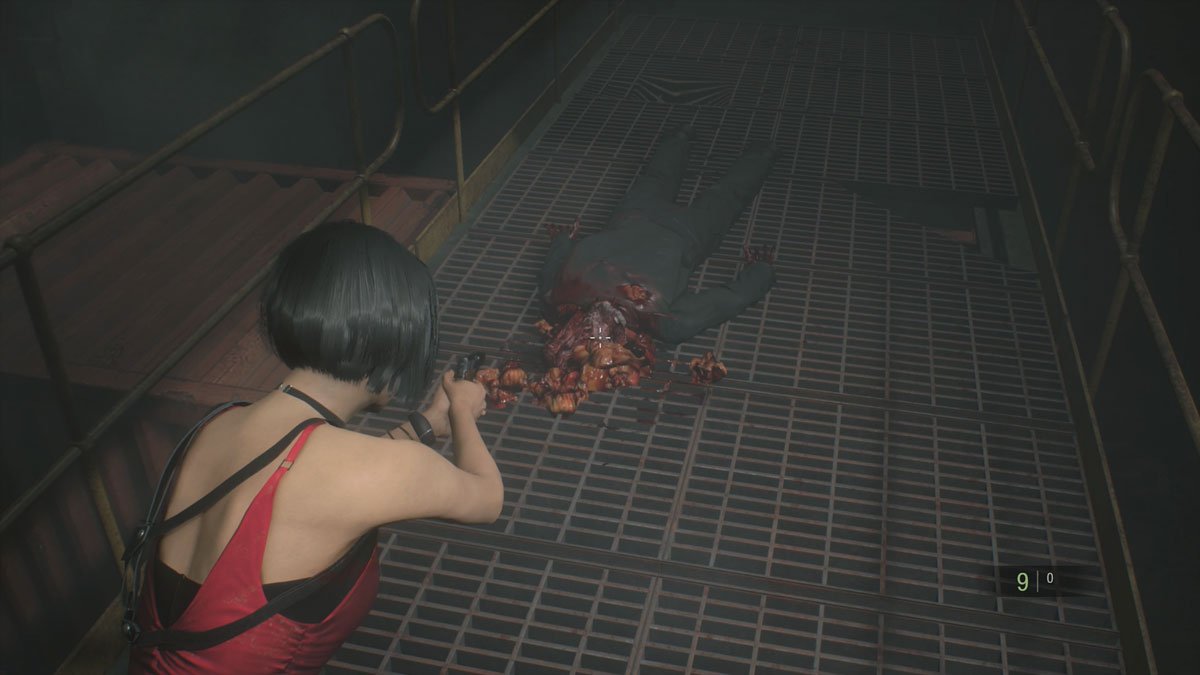 The Resident Evil remake’s combat knives feature in the Resident Evil 2 remake, useful for when a zombie or licker grapple with you. Even on a licker, the combat knife escape move seems to be a one-hit kill (just remember to retrieve it from your prey afterward); even better is stuffing a licker’s mouth with a grenade and watching it blow the thing to smithereens.

Despite trying to save ammo, I still burned through a bunch of it — and that’s because RE2‘s enemies don’t give up as easily as other baddies in the franchise’s history.

In this version of Resident Evil 2, zombies aren’t restricted to a single room or rely upon scripted events in which a select few will be able to follow you around a limited area. Instead, zombies will chase you from room to room, up and down stairs and through closed doors. Lickers too… and beasts far worse.

The result is utterly terrifying – you can’t simply run into a new room, check for enemies and collect your wits if you’re the space’s lone occupant (and this is a favourite tactic of mine in every Resident Evil game I’ve played). I learned this the hard way, sneaking into a side room near the Police Station’s shooting range. As I stood there, thinking of what key I’d just collected and where it could be used, two zombies beat down the door and shuffled towards me, hungry for my flesh. This said, I could have jumped into the game’s menu system to plan — unlike Resident Evil 5, it’s not in real-time. 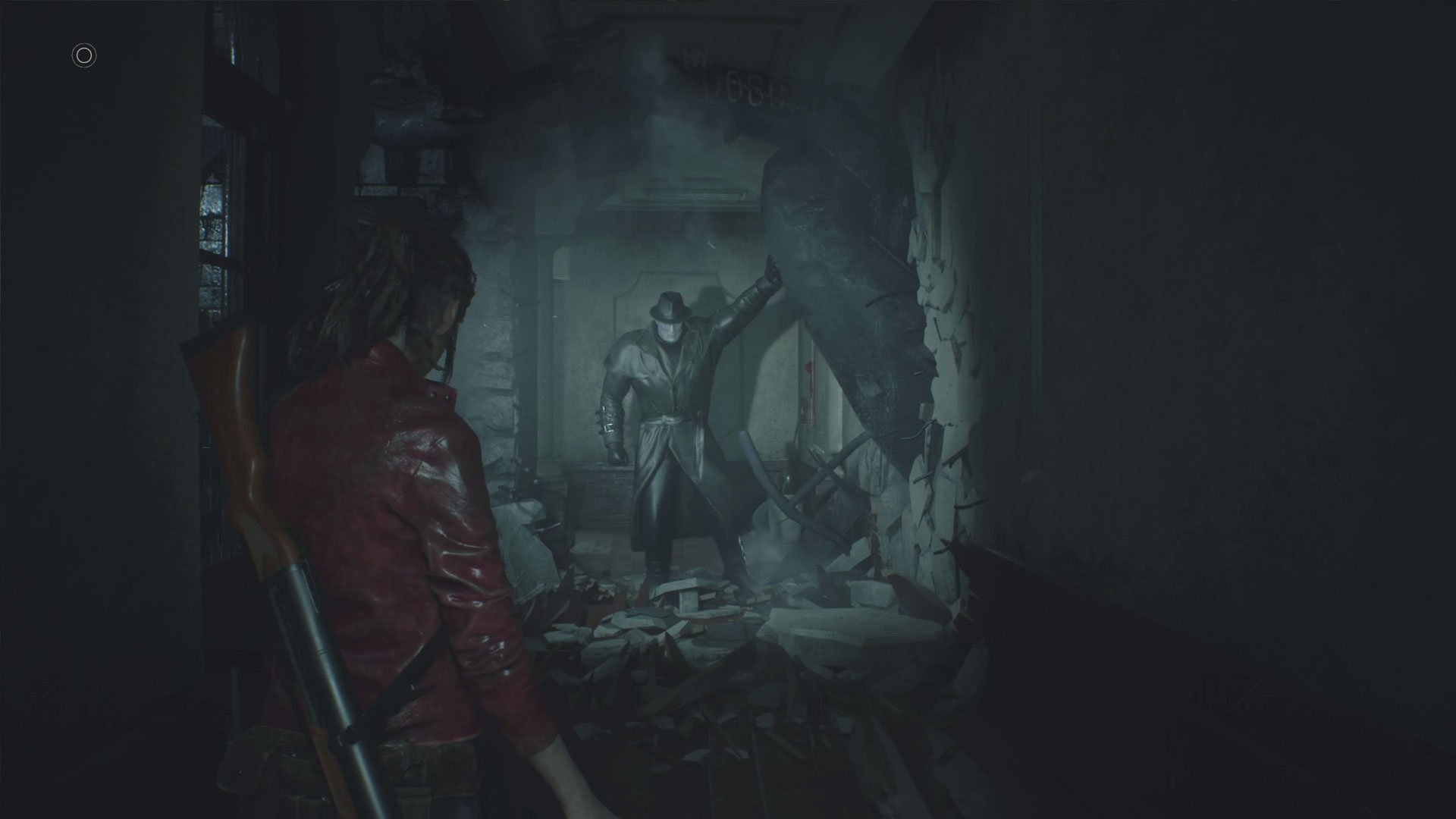 A little while later as Claire, I launched several Flame rounds at the terrifying Mr. X, downing him, and ran off to what I thought was safety. Mr. X didn’t stay down for very long, and he caught up with me just as I rounded a corner and ran straight into two angry lickers. Together, the three enemies relentlessly pursued me until I ran out of ammo and healing items and eventually succumbed to their attacks.

Tension is always cranked up to 11

Enemies that won’t die. Opponents that won’t quit stalking you. All the while, you’re expected to run into that Library and push bookshelves from left to right in order to solve puzzles, dodging attacks or wasting all your ammo to remain safe. Saying said situations are hectic is an understatement.

In old-school Resident Evil, you could spend ammo to down enemies and remain somewhat confident that the area was then safe (also knowing that stupid zombies couldn’t use doorknobs or stairs). While RE3 fixed the issue with stairs, the Resident Evil remake furthered this with those good ol’ Crimson Heads, causing you to second-guess each situation. The trouble was, you knew where those enemies were once they (re)spawned. In this Resident Evil 2 remake, you can’t count on knowing where an enemy is located at any given time. On this whole, this is great – but on the other hand, a part of me is concerned that there will simply be too much going during specific moments. A flurry of activity that’s hard to manage might look great during gameplay capture for YouTube, but that won’t feel great as great if you’re just playing to survive. 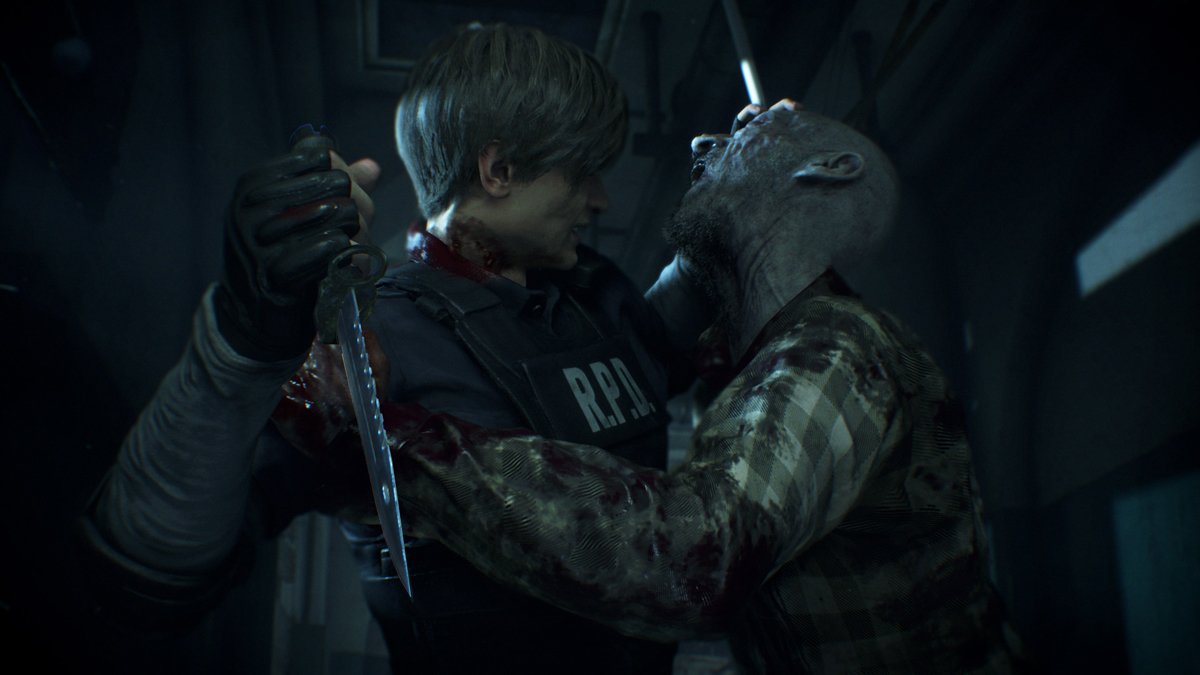 Capcom uses your knowledge against you

Thinking you’re going to start on the street, run over the Kendo’s and grab the shotty straight up? Wrong. While Capcom’s ensured – and quite thoroughly from what I’ve played – that things always feel familiar to those who’ve played Resident Evil 2 before, nothing’s actually the same. Kendo doesn’t make an appearance at the start, instead appearing after Leon and Ada manage to travel through the Police Station underground carpark. Kendo isn’t a tool to provide you with a free weapon this time around; rather than spouting (some pretty amazing, I’ll admit) one-liners, he’s fully fleshed out… to the point where I almost shed a tear for him. The same is true for Brian Irons – while he’s still absolute trash, it’s seemingly for very different reasons this time around.

We’re not able to speak much of in-game puzzles, but trust me when say this: having background knowledge is useful, but not altogether important. What you already know won’t help you that much.

Want to see some new gameplay?

We’ve got you covered… but not in this story. Our captures are pretty spoilery, so proceed here at your own risk.

Resident Evil 2 is shaping up to be quite the package; look for it from 25 January 2019 on Windows PC, Xbox One and PS4.