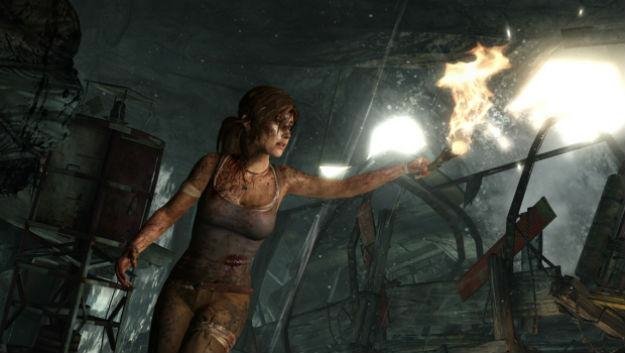 The guys over at the Square Enix booth were amazing enough to let me into a hands-off preview of the upcoming Tomb Raider reboot at this year’s E3.

Straight away as we started watching the demonstration, Lara gets her ass kicked. Not just once, either. She gets hit by a crazed islander (hmmm…another theme at this year’s E3? I’m looking at you, Far Cry 3!), falls off a cliff, bounces from tree branch to tree branch, and eventually lands on some serrated old weapon sticking out of the jungle floor. The sequences — all of them — were rendered with the in-game engine, and each wince-inducing blow was extremely fluid (and graphic!). There’s a lot of detail in the game and its environments as well; as Lara found herself in a damp cave, you could see her breath in the cold air, plus her scantily-clad body shivering from lack of heat. Though, to Square Enix’s credit, this version of Lara is quite modest compared to her previous incarnation.

Our introduction to the game served to show us just how Lara begins her struggle to survive after a shipwreck that strands herself and — I was surprised to see — a large compliment of seven other supporting characters. Straight away, the game finds ways (some good, some contrived) to separate Lara from the pack. She steps into bear traps, finds a bow and some arrows, and eventually stumbles (and we’re not going to say how) across a gun. It’s a gritty story of survival…and up until the end of the demo, devoid of tombs of any kind. Luckily, Lara’s got some fellow archaeologists in tow, and even though the group is trying to survive the island and its inhabitants, there’s clearly a sense of exploration and discovery that’s layered atop the story. It’s clear that there’s something ancient and foreboding on the island, and it’s going to become a big part of Lara’s maiden tale.

There’s a bit of platforming in the gameplay that I got to see as well, though it’s largely linear and doesn’t look like too much of an effort; though, I was watching what I’d consider to be the game’s tutorial. A welcome addition to the game’s mechanics is the introduction of the “base camp” — essentially what it sounds, physically, and in a larger sense, an XP-based system that will let Lara spend points she earns whilst exploring, killing and maiming. We watched as Lara used a base camp to increase her new “survival instinct” skill, an important new tactic at Lara’s disposal that acts much like a map; if you find a base camp for instance, the survival instinct in Lara will remember where it is and help you navigate to it down the track. Don’t worry, traditional gamers — a standard map is also accessible from the game’s standard menu.

Moreover, the base camp’s fire serves another purpose — that of cooking animals she fells in the jungle. I watched, a horrified look on my face, as Lara took down her first deer (courtesy her new bow) and then began to skin it. The scene was quite emotional, and whilst you got the sense Lara knew HOW to skin a deer, she’d never actually committed the act before. It quite the departure from the almost comical skinning witnessed in Red Dead Redemption.

Like most games in E3, there seems to be a move towards straight-up action; Lara at one point was prone in a bear trap, and used her bow plus bullet time (arrow time?) to defend herself against attacking wolves. Traditional gun play looks much the same as previous Tomb Raider titles, love it or hate it.