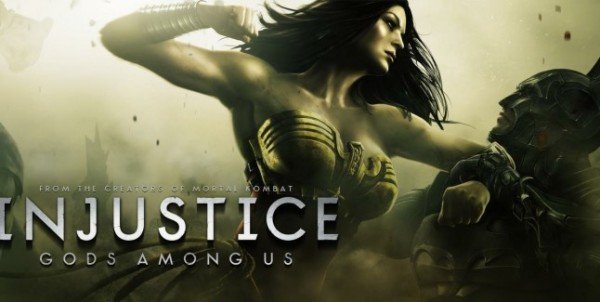 Settling into Warner Bros.’ preview space, I did my best to calmly walk over to the booth for Injustice: Gods Among Us, even though every fibre of my being wanted to emulate The Flash and be first in line to check out NetherRealm’s new title. Very quickly into the preview, I learned that this game shouldn’t be considered a sequel to the dud that was Mortal Kombat vs DC Universe; moreover, it’s not even right to compare it to the most recent Mortal Kombat. Not that Australians could…well, legally, anyway.

The NetherRealm developer tasked with delivering the hands-off preview was quick to point out this title wasn’t like any fighting game before it. After the character select screen — we were treated to two different fights, by the way: Superman vs the Flash in the Batcave, and Solomon Grundy vs Batman in Future City — an announcer didn’t fill the air with a chant of “Round One!” 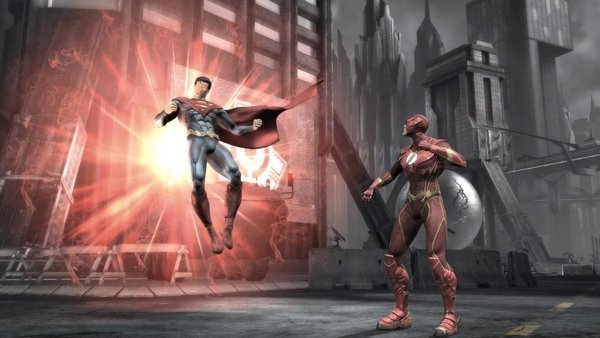 Injustice is dropping those types of fighting game conventions to create a more cinematic experience. In fact, contrary to the Mortal Kombat norm, Injustice doesn’t have a dedicated block button; in this game, you just hold back on your joystick. How controversial! At any rate, the fights between characters take place in one big hit, with more health to ensure the fights aren’t finished up in a quick and dirty manner.

The visuals in the game are breathtaking, and you get a real sense of the level of detail NetherRealm has put into the characters and their costumes as they’re introduced before a match. NetherRealm has captured DC’s iconic characters extremely well; The Flash was bouncing around with frenzied energy whilst idle, and in comparison, Superman was stoic and calm.

As the two characters began to duke it out, the Batcave started to crumble around them…to the fighter’s advantage. A massive punch from Superman broke open a display case in the cave which held an old Batsuit; Superman grabbed hold of two bat-grenades that fell out of the suit itself and threw them at poor old Flash. To his credit, The Flash was able to position himself near the Batcomputer afterward and pressed a button which launched missiles from the Batmobile at the Man of Steel.

Each piece of every level has been carefully designed to give the fights that cinematic feel aimed for, the NetherRealm developer claimed. We watched as Superman launched The Flash deeper down into the Batcave, sending him tumbling end over end until the Batboat stopped his fall. We were told that the game has been designed for an extremely enjoyable fighting experience, but also for the enjoyment of those nearby who are watching the spectacle. NetherRealm’s done a great job of that too — the journalists in attendance couldn’t stop “ooh”-ing and “aah”-ing with each new event that took place, each more grandiose than the last.

Oh, and by the way — there’s blood in this game, and lots of it. 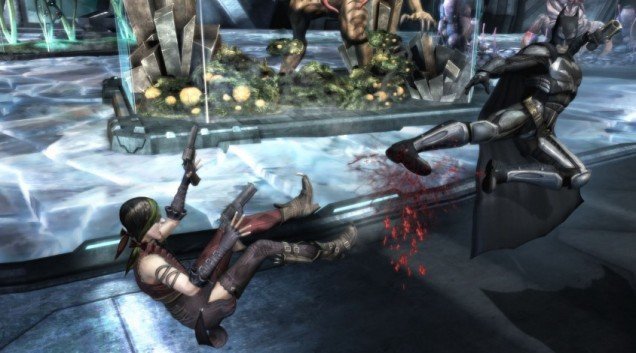 Just when you thought it couldn’t get any more spectacular, we got to witness the super moves of both characters. Using his super meter, The Flash ran around the world a couple times — as shown by the game’s camera panning out to literally show him whizzing around the globe — until he built up enough momentum to run back through the Batcave to smash Superman with a crushing blow. Not to be outdone, Superman uppercutted Flash so hard that the crimson hero went flying into the upper atmosphere. Superman flew up to meet Flash, and then punched him back down to earth. Both moves are completely over the top, and fit in SO well with what you’d expect from the DC Universe. And, just like NetherRealm wanted, each move really lent the feeling of a blockbuster movie to the game.

All up, Injustice: Gods Among Us — apart from a rather silly name; I wonder why WB didn’t prefer to use the Justice League brand — looks to do some proper justice to the DC characters we know and love. Yeah, yeah…pardon the pun.