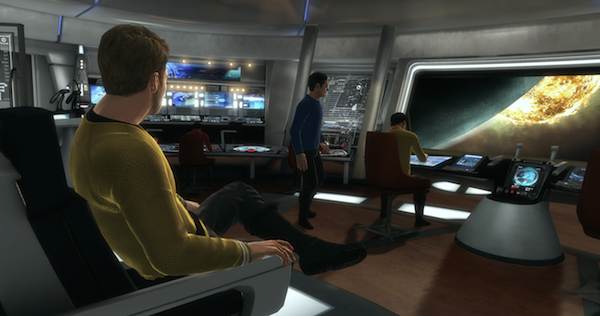 I am not going to lie: Namco Bandai’s Star Trek had me the most excited, pre-E3.

Thankfully, it did not disappoint.

I had the chance to attend a hands-off, pre-alpha gameplay demonstration of the new game modelled after the new Star Trek movie universe, and timed for release alongside the release of Star Trek 2 next year. The game itself takes place between the events of the first and second rebooted films; indeed, the demo’s locale was that of New Vulcan, formed after the demise of Spock’s home planet in the first movie.

The Digital Extremes developer conducting the demo was proud to announce a working partnership with Bad Robot, JJ Abrams’ production company, charged by Paramount to create the new franchise and its films. Moreover, the Digital Extremes representative was incredibly excited to inform the audience that the movie’s cast would be reprising their roles in the game. 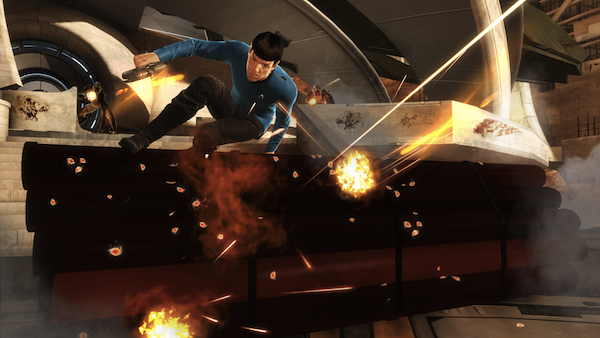 We were treated to a co-op demonstration of gameplay right from the start of the title. The game features asymmetrical co-op (clearly, the buzz phrase of E3, I should mention); playing as Spock will offer a more logical (sorry, had to go there), tactical experience, while Captain Kirk is all about action and jumping into danger head-first. As an example, Kirk tries jumping over a very large gap, only to miss and hang precariously from a ledge. That leaves Spock in the clear to deliver a dry jab and use his tricorder to find some bridge controls to correct the situation.

Very early on into the demonstration, we got our first example of the asymmetrical nature of the game; both Kirk and Spock had to work together to hack a door — Kirk was filtering a wavelength required to open a door at the same time as Spock was tuning the wave.

Later, Kirk was forced to defend a point on a New Vulcan base whilst Spock was charged with sneaking behind an enemy to deliver a nerve-pinch, and then had to use his tricorder to evaluate the situation, providing Kirk with a new set of strategies to progress through the situation. Spock then chose to mind-meld with an enemy to gain further intel; his point-of-view showed insights into the mind of the baddie whilst from Kirk’s gameplay screen, Spock was just standing looking concerned. You’re definitely going to want to play this title through as both characters before you’re done. 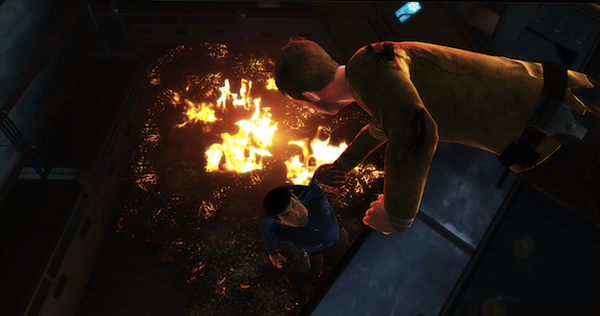 The title looks like it’s had a bunch of money thrown at it, and the ever so crushing lack-of-effort tag of “movie tie-in” doesn’t seem to apply at all. From the start of the demo, the Enterprise — and both its exterior and interiors — look true to form. I think Digital Extremes have even got the lens flares on the bridge going as well. Upon landing on New Vulcan, you could see intricate levels of detail on the planet’s surface, even down to the tiniest of insects hovering around Kirk and Spock. The likenesses of the characters are also spot on as well, so I might be tempted to centre the camera on Chris Pine’s Kirk and just swoon for a while.

Most importantly, the game has a true Star Trek feel — the pair of Kirk and Spock disposed of enemies with their phasers on stun, and had Scotty beam the unconscious baddies to the Enterprise brig so they wouldn’t be a problem later on. The quips between the duo are ripped straight from the movies, and Kirk’s giddy excitement at finding a new weapon, courtesy of the enemy — “Scotty’s going to love this thing!” — made the preview audience laugh out loud.

Sure, at its core, the game is another third-person, cover-based shooter, but its one with heart, history and soul. Trekkie or not, I cannot wait to get my hands on Star Trek when it’s released in 2013 for Xbox 360, PC and PS3.