As a big fan of the New Super Mario Bros. series, I was very excited to get a look at the upcoming DLC for New Super Mario Bros. U as it’s my favorite Wii U game. I played through NSMBU‘s campaign questing for all five stars in each level and spent days competing with friends in challenge mode. With every opportunity I’ve had to give Nintendo feedback (mostly through registering games in club Nintendo), I’ve asked for extra levels and content in NSMBU and online leaderboards for the challenge mode. It looks like they are listening, now we just need those leaderboards.

So Nintendo have offered more levels, but there’s a catch. This being the year of Luigi, the taller, green plumber is your only player option in single player. For those who haven’t played Super Mario Bros. 2 or are unfamiliar with the Super Mario series, Luigi has a different skill set to his Bro. Not only can he jump higher than Mario, he weighs less. This allows Luigi to stay in the air longer by fluttering his legs, but its not all good news. Luigi is a lot more frantic and starts each level with only 100 seconds. This stressful predicament seems to have the poor plumber a bit frazzled and as a result he slides around much more than Mario. It’s like playing in a slippery ice level all the time and takes some getting used to.

New Super Luigi U is set in on the same world map as NSMBU making the add-on just as big a game as the the original. While the levels are shorter because of the new time limit there’s still a lot of new side scrolling fun. Visually, New Super Luigi U looks just as good as NSMBU proving that Mario in HD should have happened a long time ago.

Aside from the shorter levels and time limite another key difference is the suspicious absence of Mario. This requires a character to fill his spot in four player local co-op and Nintendo have chosen to fill that space with Nabbit. Nabbit is unable to use any of the power ups or items littered around the game world and instead, collects them in his sack. At the end of the level he is able to trade them for 1-ups which seems a little unfair at first. However, Nabbit is totally immune to all enemies on screen so it’s clear Nintendo are positioning him as more of a support character or for people less familiar with Mario games are gaming in general. 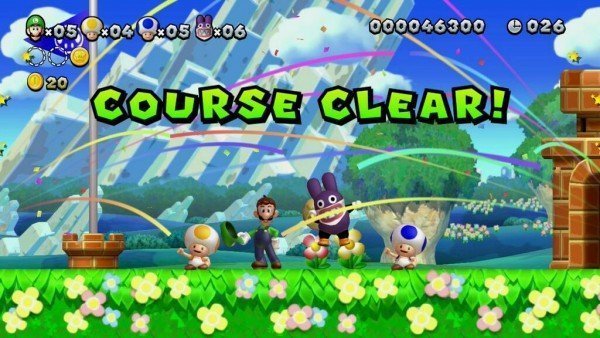 While playing I discovered a few Easter eggs including pixel Luigi mosaics hidden behind blocks. It’s little things like this that I appreciate and will see me playing the game longer and exploring further to see what other hidden gems the developers have included in the levels. On release the game will be fully compatible with the Wii U Pro controller, ever so slightly validating my first day purchase of the criminally misused optional controller. There was talk at the Nintendo booth of a possible update for the main game allowing for the same Pro controller functionality, so fingers crossed.

New Super Luigi U will be available exclusively for Wii U 27 July 2013 on the eStore.