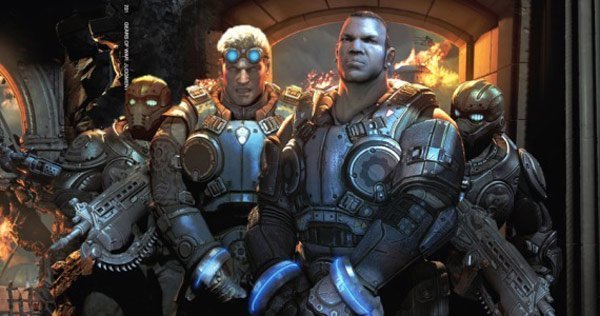 I had to put on my most professional face as I entered the Microsoft preview area to get some hands-off time with Gears of War: Judgement. After all, after stepping into the preview booth, I was face to face with none other than Epic’s Cliff Bleszinski.

Wasting no time, Cliffy B explained what we’re in for with this new Gears of War experience. “We knew were going for prequels,” he began. “We wanted to do Emergence Day, but we wouldn’t have chainsaws on our guns [or Lancers, as you fanboys know them] at that time. That was a big problem.” So, Judgement is a story set in what Bleszinski called, “an Emergence Day window.” That window is about 15 years before the events of the original Gears of War.

Next, Bleszinski explained how Damon Baird became the main character of this new story. “He was actually polled as one of the top bastards on Xbox.com,” said Cliff excitedly. “So you guys clearly care about him. It made sense to go through Baird’s fall from grace in this story.” Judgement will follow Baird and Kilo Squad — consisting of returning character Cole Train and two newbies — as they defy COG orders to try to save lives. Caught out, and after their failure, the story recounts the events that have taken place from the viewpoint of Baird’s court martial.

Cliffy B’s partner in crime for the day (pun intended), Adrian Chmielarz from People Can Fly, confirmed his development team has been working closely within Epic to deliver an old-school Gears of War experience. “Our internal motto is ‘fear the Locust’,” he began. “We  want people to be afraid of the Locust again and recapture have the vibe you got the first time you played Gears of War.” 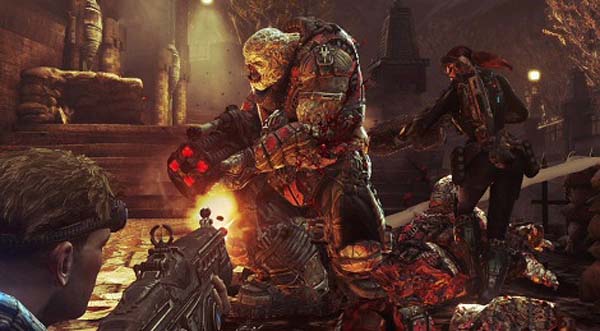 Adrian asserted that they’re also trying to ramp everything that makes Gears of War a successful franchise WAY up; they’ve focused on an increased intensity and speed for this new title, and claim that they’re rendering far more Locust on screen than ever before. They’ve also upped the ante when it comes to difficulty.

“We’ve softened this generation,” said Bleszinski. “When’s the last time a game actually asked something of you?” He recounted a story where the team at Epic had been struggling with a section in Judgement. After playing in four player co-op on Hardcore multiple times and continually failing, the group finally rejoiced when they were successful. “When we were done, we high-fived each other with our sweaty palms and clapped,” Bleszinski said.

“Then we turned the corner and it was on again. That’s the kind of intensity we’re aiming for.”

The difficulty is constantly being evaluated and tweaked as you play thanks to the new “S3”, or smart spawn system. “In previous games, a higher difficulty just meant less help of you, and more for them. Now, S3 analyses where you are, runs multiple combat scenarios and tries to keep you on your toes,” explained Adrian. “With S3, spots on the map you’ve already attempted and died on could yield different enemy classes and numbers the next time around, so you’re always forced to change up your strategy.”

Completing the game will open up the game’s “Declassified” mode, offering further insight into Judgement‘s storyline. As with any bureaucracy, Adrian said that the COG has classified certain details of Baird’s story, and playing through the “Declassified” version of a level will be akin to removing the “black ink” on a censored document. “You’ll find out why something was uncovered, and why,” continued Adrian.  As an example, playing through a “Declassified” level might suddenly spawn a mech to use, dynamically changing the testimony Baird delivers in court.

To keep the game ramped up and fast, Gears of War: Judgement will feature a revamped control scheme — something that many fans have been demanding from day one. In a brilliant move, the D-pad will no longer be used to swap weapons; one button on the controller face will instead cycle between two primary weapons. That button will be held to gain access to your pistol. There’s also a one-button grenade throw command that doesn’t show the projectile’s trajectory, though you can still use that feature if you wish. 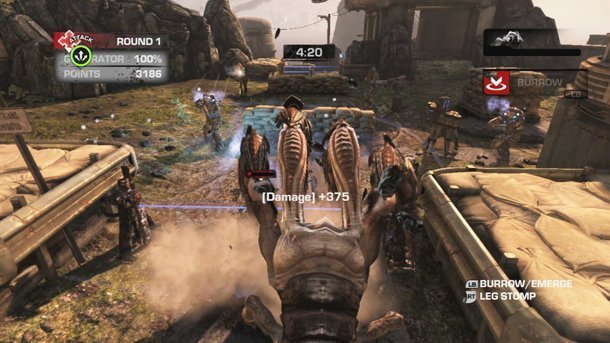 Judgement will also see a new multiplayer mode called “Overrun,” which plays similar to Battlefield’s “Rush mode”. Two teams with five members will fight over a generator; the COG side will defend in the first instance, while the Locust team attacks, and then both teams swap objectives for round two.

The mode will also feature specific maps, designed solely for the game type, plus different classes to choose from. For instance, the COG Engineer can repair and put down temporary turrets for protection, the COG Soldier can provide ammo to allies, the COG medic can heal and revive and the COG Scout can access sniping points that no other COG or Locust can, with the exception of the Wretch. The Locust classes are more or less the same as in Gears of War 3‘s “Beast” mode.

The decision to add “Overrun” into Judgement was an easy one, said Cliffy B. “I’ve always loved class based gaming, and we had a bit of that with ‘Beast’ mode, but now we’ve got something that almost merges ‘Horde’ versus Beast’.

“My mantra is let gamers play their way, and this mode actually lets you rather than making you get really good with a shotgun,” he continued.

Look for Gears of War: Judgement exclusively on the Xbox 360 sometime in 2013.