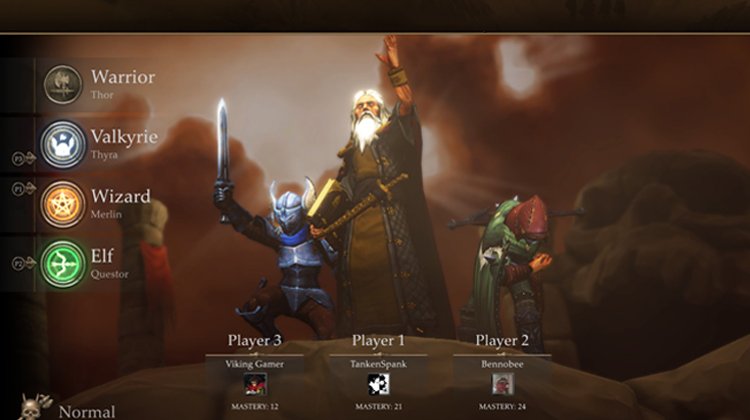 The new Gauntlet needs views… badly. Original Gauntlet fans are probably shaking their heads in disgust at that bad pun, but you know what? That’s ok. Words aren’t for everyone; that’s why Mark Ankucic recorded a preview video to demonstrate what I’ll try to say over the next few paragraphs.

The new Gauntlet — still titled Gauntlet — is a reboot of the memorable 1980s classic that cost most 30+ year old gamers many hours of their youth. Developed by Arrowhead Studios, it maintains its original co-op/dungeon crawler style whilst adding new content, goals and overall structure to keep things fresh. In place of the original 100 level dungeon, the new version is broken into twelve chapters. Our preview copy had the first third of the game which consisted of three chapters and a boss level. Each chapter contained three levels and the entire preview took us about an hour to complete. Based on this I would assume the final product will be fairly short however, as it’s a launching at only $20 AUD, I’m sure it will be worth it.

Are you old enough to be a fan of the original? Well, you’ll be happy to know that the basics are still the same. Your goal is to navigate a simple-ish maze whilst locating door keys, killing monsters, destroying monster spawners, collecting gold and, of course, consuming large roast dinners. The new Gauntlet isn’t just a straight remake though; character skills are more varied and new gameplay elements like boss levels, strategic secret rooms, and mini puzzles have been added.

Gauntlet can be played solo but is considerably better with friends. Not only does it make the challenge easier, it introduces a competitive element as you race to get that gold, food, crown or kill.

Character variance has improved and, whilst the original cast return, each character requires a unique play style and strategy to win. In lieu of traditional RPG elements like armor, weapon, level upgrades Gauntlet uses a mastery system. Kill X number of liches, eat X amount of food, die X number of times and you gain a level. Gaining a level grants perks to your character like faster move speed or a damage multiplier for enemy types. Reminiscent of games like Jetpack Joyride this is something nice to have but not enough to keep you trying for 100%. You can vary your character with special skills (called relics) however, in the preview, there were only three and they didn’t make a great deal of difference. Unfortunately the limited skill set means there’s little variance in how you play each character however they’re well balanced and complement each other nicely so it works well.

Are you one of those who’ve never played Gauntlet? Never fear; in our preview we had two veterans and one noob and all enjoyed it equally. There’s no per-requisite required to enjoy this version; only a love or arcade style dungeon crawlers is required. The gameplay is solid, graphics are nice and score suitable. More importantly it’s a lot of fun.

In conclusion this is a enjoyable and addictive arcade dungeon crawler which, I feel, will have a short lifespan. It felt a lot more straight forward and simplistic than the original and I hope the final 8 chapters introduce the varied routes and tough decisions of the original. That said, it’s debuting at just $20 AUD so, if you want a decent co-operative game, this is definitely one to keep your eye on.