Stevivor
Home Previews The Last of Us Part 2 Preview: A follow up that clicks 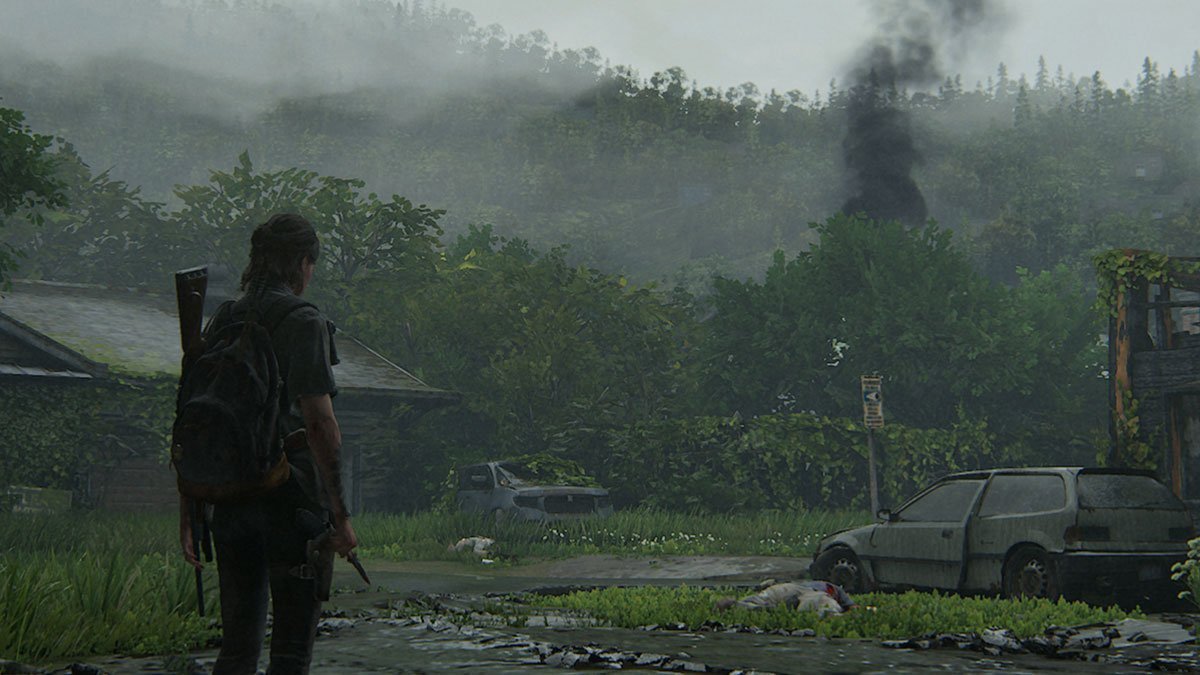 It’s odd that Neil Druckmann starts my exclusive hands on session by explaining why Naughty Dog is making another The Last of Us. The 2013 original was a masterpiece – a sequel felt like no-brainer to me. Be that as it may, he says that while a lot of people loved that game, some folks thought it could (and should) stand on its own. It won countless GOTY awards, has a massive fanbase, and at last official count sold over 17 million copies. None of those things, he tells me, are the reasons why he’d ever make the game I’m about to spend three hours with, The Last of Us Part 2.

For those of you unfamiliar with it, Naughty Dog is a studio in a very lucky and privileged position with Sony. The publisher basically lets this team make whatever game it’s “excited by”. With TLoU the studio felt compelled to tell another story that had an emotional core. The idea of doing a sequel was just as strong a compulsion – Druckmann felt like this world, these characters, in this entertainment medium were a perfect fit for the dark story he has in mind for Part 2.

The Last of Us was about the love between a parent and a child. More specifically, this unconditional love that can drive you mad. The parents out there reading this will know the deal immediately – the kind of sacrifices you’d be prepared to make for your child. This concept and the philosophical questions that come off of that concept are what helped Naughty Dog to shape the story, the gameplay, the music – all those aspects came together to make a philosophical argument of “okay, how far would you go to protect your loved one?” By the end of the first game, we saw Joel willing to sacrifice his own well-being, the people close to him, all of mankind and even its own relationship with his surrogate daughter to protect her.

So it was this exploration of a universal, primal feeling that led a lot of that production. In this game, however, Naughty Dog is still focussing on a story that’s still about love, but also a fair amount of hate. Druckmann says he wants to talk about this idea of rage and anger, and how close they can actually be to love.

Basically, it’s the flip-side. Part 2 involves a calamity of some description, and it’ll evoke the feeling of “okay, well how far would you go to avenge the one that you love?” The follow on from that: what will be the cost of that hate? What would undertaking the worst eye-for-an-eye campaign do to you as a person – and would there be any coming back from that? These are the philosophical questions you’ll soon have to face.

Druckmann says that, without giving too much away, he landed on a narrative that he thinks is a really unique take on a revenge story. It deals with the cycle of violence. The idea that one violent act doesn’t exist in a vacuum. Cryptically, he also says that the team is doing something “that only can be done in a video game”.

For those of you who somehow missed the first game, here’s a super short recap. We’re 25 years into a cordyceps infection that turned most of mankind into these roaming infected cannibals. The few survivors left are either marauding scumbags who, when they’re not picking peanuts out of poo, are trying to rape or murder innocent travelers. Other folks are more moral and belong to enclaves that sometimes go to extremes to survive in this new reality. One of these places is Jackson, Wyoming, the refuge of a civil society where we ended the previous game.

Ellie is now 19 and has been through this traumatic journey with a ruthless survivor named Joel. They bonded together and he basically taught her how to shiv to live. That said, now she’s trying to live in this town that has a school, she has friends, she can have hobbies. She has a best friend named Dina that she has a crush on and can live an almost normal life now. At least until a mysterious event occurs that turns her world upside down and sets her on the road to brutal retribution.

I was lucky enough to play two full chapters of that journey – three full hours of gameplay. The first demo is essentially A Day in The Life of Ellie and Dina. They’re on a rotating roster to go on patrols outside of the town. They need to spot threats – marauders or infected – and neutralise them if it’s a small deal. If not, tactically retreat and call for aid. It’s very early in the game and is filled with tutorials, but I’m quickly impressed by wider spaces to explore and horse riding action that’s on par with Red Dead Redemption 2.

The second slice of gameplay is from much later on, post calamity. Ellie is pissed and on the hunt. Her journey has lead her to Seattle, a former quarantine zone that is now controlled by the WLF (and their detractors call them Wolves). These guys could charm the paint off walls. They’re essentially xenophobes who kill anybody who stumble into their path. Somehow, Ellie is now stuck within the city, trying to prevent the group from hunting down and killing her friend Tommy. Druckmann says this is much later in the game and the setups are much more challenging, but I’m given a lot more tools at my disposal.

That’s all I really want to spoil, to be honest. But I would like to offer some pro tips. Firstly, Ellie feels more athletic and agile than old boy Joel was. That and you now have a dedicated jump button that open up vertical opportunities, both in combat and during those kleptomania sprees for crafting items. She can also crouch and go prone – scooting under cars is a very useful tactic (and you can even craft gear under there).

Part 2 uses analogue stealth and the AI has been vastly improved, too. As you get lower you are less visible, and grass will help you but not full conceal you. There’s also a dedicated dodge button on L1 that can help you avoid new scars and speed-holes when up against somebody with an axe. Dodging also makes ranged enemies less accurate. But no, you’re not Neo. So don’t get cocky.

Next up: there’s a more advanced version of the Listen Mode that let you effectively “see” enemies behind walls. The farther away folks are ambiguous, grey blobby X-rays. The closer foes are sharply defined, so you can tell which way they’re facing. Be that as it may, you won’t always see things coming in this adventure. Naughty Dog has to be commended for upping their jump-scare game here.

I should also like to warn you about dogs. The WLF just love their attack pooches – and I do mean love, when you kill them, the enemies let out a pitiful wail as their best friend dies. The guilt gets worse when you then execute the dog’s handler only to hear that person’s friend shriek out their name and call you a murderous bitch. It’s… confronting.

Lastly, the biggest tip you can get is this: running away is encouraged. If you’re overwhelmed, bail, reestablish stealth and go at the group from a different vector. Guerrilla styles. Or just avoid them altogether, either by being a ghost or by running for your dear life. I played this entire section loud, like a third-person action shooter. I compared notes with a colleague who played it pure stealth, and a another who did a mad Benny Hill run through it. All of them were viable. The latter approach looked insanely intense – like an interactive Run Lola Run, sprinkled with mutants.

There’s also a lot to be said for crafting items via your backpack menu, like trip and smoke mines. Alternatively, you can enhance your personal skills and steer your heroine into your personal play-style via enhancement pills. Ellie is also an absolute gunsmith if you can find a workbench for her (and a shitload of scrap). I’d suggest you pimp out that pump action shottie early. One trigger pull is all it takes to make somebody look like a half eaten gingerbread man.

You should also explore. There are so many nooks and crannies off this beaten path. I saw no sandboxes per se, but this game has taken the blinkers right off when it comes to explorable areas. – they’re at least twice as big. Stop and smell the roses and you get optional dialogue, environmental stories, collectables, and… uh, sealed basements full of enemies waiting to jack in the box onto your jugular.

Because yeah, the best hideyholes have the new mutant enemy type in them, Shamblers. Think: a seven foot thing that has no head (due to the world’s worst tumor). Once alerted it seems to know where you are at all times and if it gets close it farts out lethal gases that can get you through cover. Oh, and it explodes into this when it carks it. Lovely.

At the end of the day (and the world, I guess) The Last of Us Part 2 is shaping up to be something truly special. I went in with the absolute highest of expectations, and they were met. The visuals here set a new benchmark, and the new motion-matching animation technique makes the on-screen action look eerily lifelike. Likewise, the combat is white knuckle stuff, be it desperate shootouts in the streets or a series of bunghole-puckering melee brawls in dank suburban dungeons. More importantly than all of that, it just feels great in your hands – flawless, even in this incomplete state.

Basically, my instincts tell me that this has GOTY carved all over it. Deep. I’m planning to buy this harrowing, surely-can’t-end-well adventure on day one of release. Day two is a pre-booked therapy session.

The Last of Us Part 2 heads to PS4 on 21 February 2020. Multiple special editions of the game were detailed during this week’s State of Play livestream; The Last of Us Remastered features as a free download to PlayStation Plus members over October 2019.

The Last of Us Part 2: Interview with lead animator Almudena Soria

The Last of Us Part 2 screenshots

Adam Mathew traveled to Los Angeles, USA to preview The Last of Us Part 2 as a guest of Sony. Travel and accommodation were supplied by the publisher.