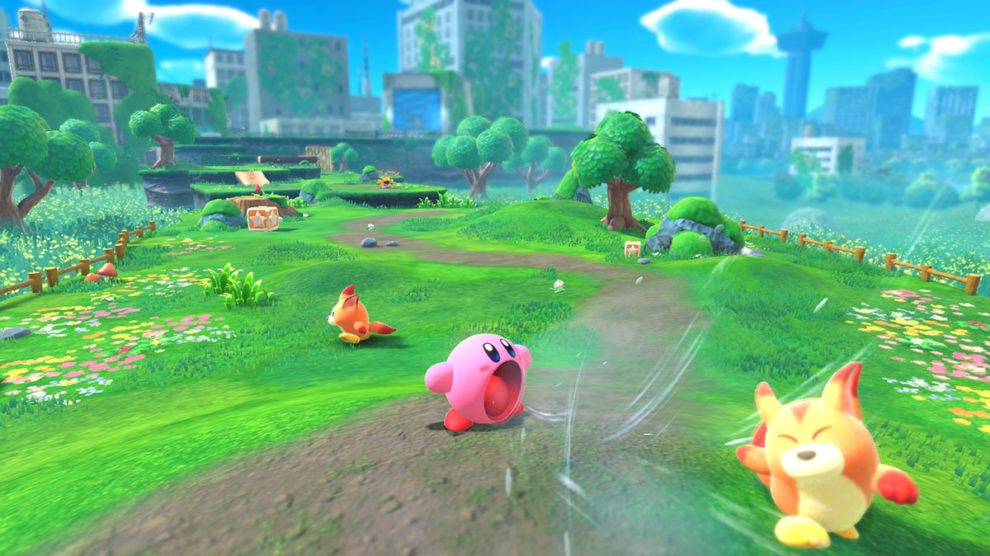 Sucked in! Our hands-on preview with HAL's delightful post-apocalyptic world.

It feels like an eternity ago that the hot topic in every gaming mag was which of Nintendo’s 2D gems would transition to 3D. But it never happened for Kirby.

At the time, it seemed like headline acts Mario, Donkey Kong and Zelda evolved one-by-one, and that Metroid must have caused some serious grief, arriving an entire generation later. In reality, Nintendo’s 3D revolution was merely a few years apart — and since then, we’ve had a resurgence of all these franchises returning to their 2D roots. So it’s somewhat bemusing to be here, in 2022, talking about one of Nintendo’s most iconic heroes finally getting his first proper 3D adventure after 30 years — and as many games.

Kirby and the Forgotten Land is faithful to HAL Laboratory’s puffball platforming pedigree. We’ve played through all the stages in the first world, where it borrows heavily from the book of Super Mario 3D Land and 3D World. It’s a 3D platformer, with 3D movement, that follows the checklist of a 2D side-scroller.

The Forgotten Land is a collection of linear stages that guide Kirby along a predetermined route, but allow him to explore in an extra dimension. While 3D platformers in general have become a rare breed, the confined 3D style pioneered by Mario combining his 3D and 2D incarnations isn’t something we often see in a dedicated action-platformer; and it meshes extremely well with the Kirby playbook.

The long and winding roads connecting abandoned parks and overgrown malls funnel you towards enemies and clever puzzles, many of which are hiding in plain sight. In the first world, Kirby can gobble up a variety of enemies to inherit their signature abilities. These range from becoming a green-hatted sword guy, fire hurler, cannon ball firer, boomerang thrower, bomb bowler and spikey ball. 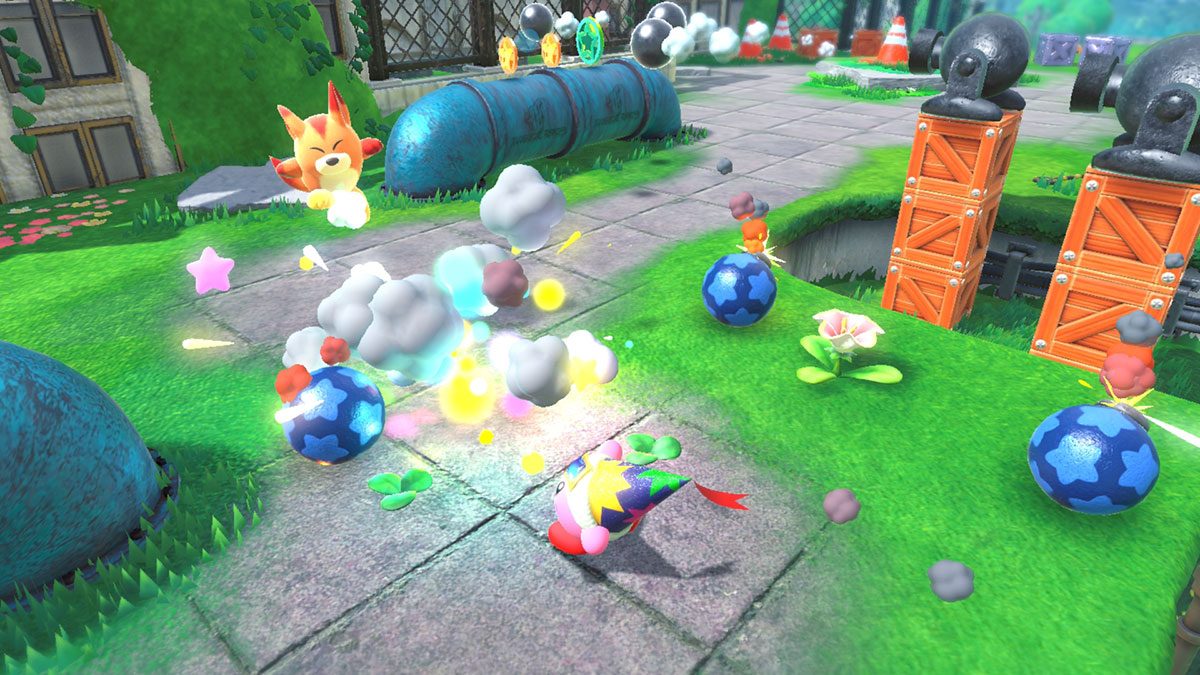 Each level is home to several hidden creatures called Waddle Dees in need of a saviour – reminiscent of the K.O.N.G letters, a level doesn’t feel complete without rescuing ‘em all. They’re joined by a bunch of collectibles (HAL loves a virtual figure) and optional quirky objectives, which are as close as Nintendo comes to trophies or achievements.

Most of these are tucked away, requiring the unique ability of a recently consumed enemy, but it’s certainly easy to waltz right past if you’re not paying attention. Coupled with two difficulty modes, Kirby and the Forgotten Land allows players to blast towards the finish line of each level but demands a keen eye from those who want to finish them properly.

This array of abilities is very Kirby, and they all adapt well to the guided 3D levels. With the foundations strong but familiar, the folks at HAL Labs have made things a little more bonkers with Mouth Mode. Pouncing on everyday objects considerably outside his weight range, including a car, traffic cone and even a staircase, opens new pathways for Kirby. These oversized power-ups can be obtained on a short-term basis without sacrificing Kirby’s current borrowed ability. 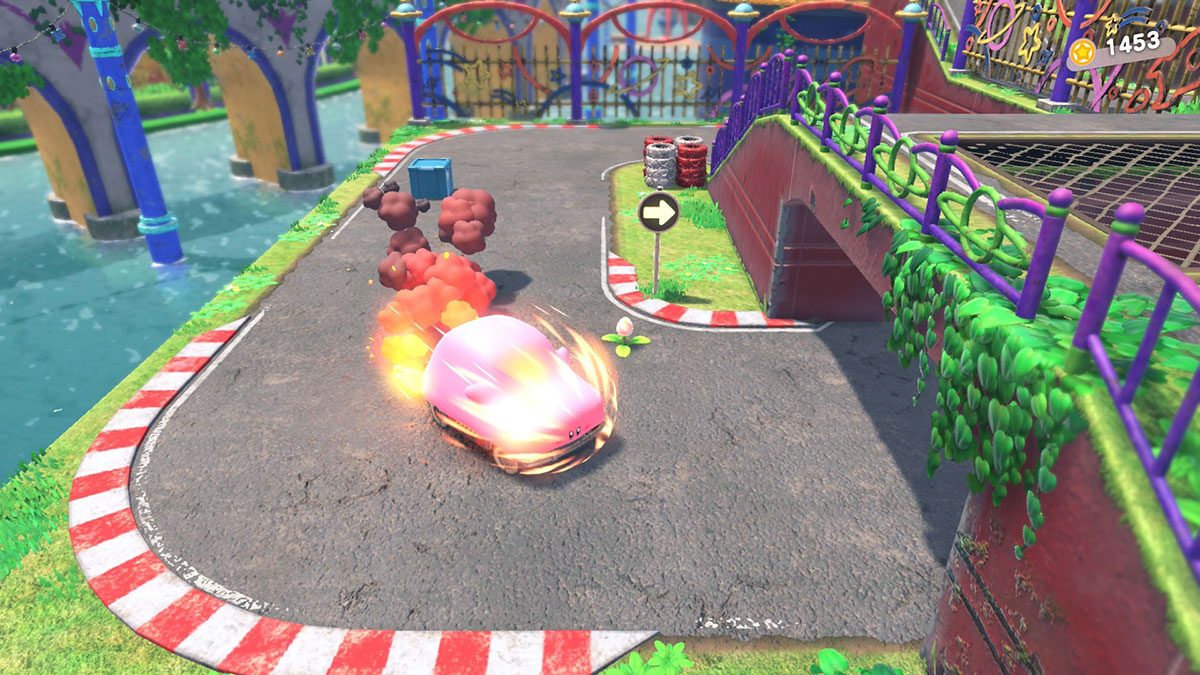 No matter the form Kirby takes, the camera swings, dips and revolves around you through a variety of angles, ranging from the classic behind-the-back platformer, to an almost top-down view and everything in between. There’s even a Crash Bandicoot-inspired chase towards the camera. It contours to the curves of the level, so while you can make minor adjustments with the right stick, you needn’t bother, as the active auto-camera drives you in the correct direction. Camera kerfuffling is a blight on the few fully-fledged 3D platformers that dare challenge Mario, but is a non-issue here. This hybrid approach to level design is best described as a 3D platformer that doesn’t need any camera control.

After the false start of a cancelled 3D platformer on GameCube years ago, Kirby proves it’s never too late to learn new tricks as he celebrates his 30th in full 3D. HAL Laboratory didn’t forget, it was just waiting for Kirby to find his Forgotten Land.

Kirby and the Forgotten Land launches on 25 March 2022 for Nintendo Switch. Stay tuned for our full review and hit up a demo on Switch if you’d like to play through a bit of the title yourself.