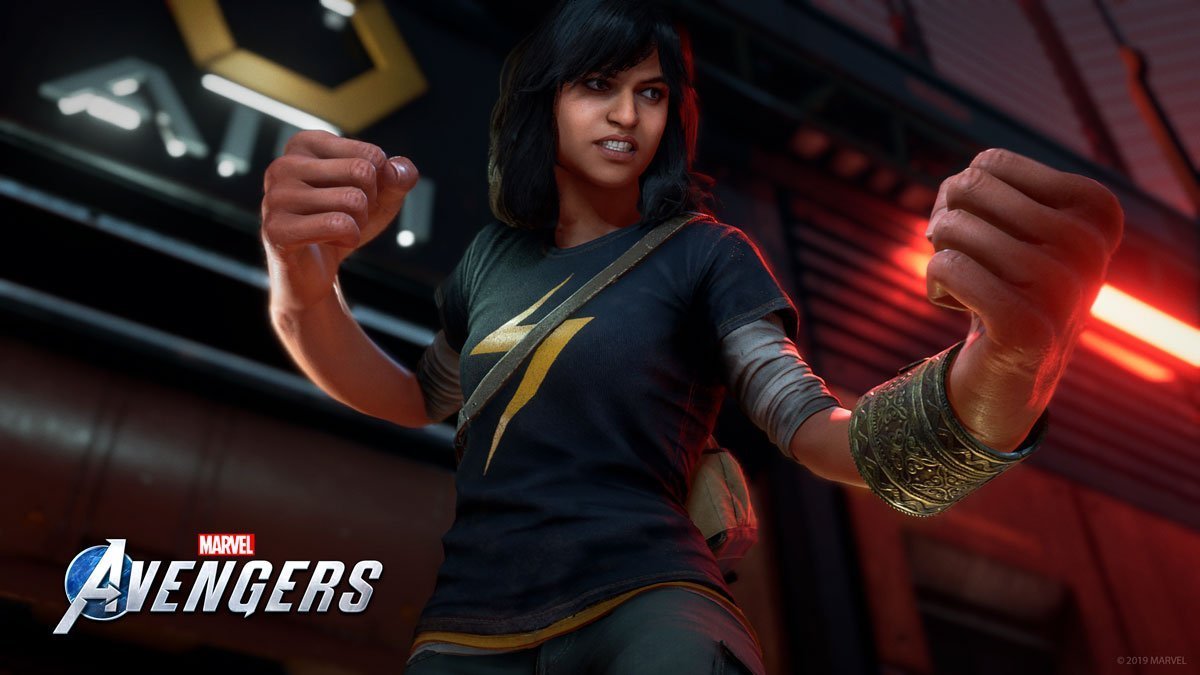 Or is that embiggened hands-on?

Ms Marvel herself, Kamala Khan, was recently confirmed for 2020’s Marvel’s Avengers by developer Crystal dynamics. Spending time with studio head Scot Amos at PAX AUS 2019, we had the chance to get to know the nerdy Pakistani-American protagonist. What made her the right choice for inclusion?

”She’s a fan of the Avengers. It’s a simple enough answer,” Amos shrugged. “I don’t mean to sound flippant, but it literally is. There’s somebody in the Marvel Universe who was already a fan of the Avengers who happens to have this amazing origin story that is going to be so quickly relatable to any of us who’ve seen these characters, have grown up with these characters.

“This character is just beginning her journey. She’s only had her own [comic] series… since 2014. This is kind of her first big-screen debut, having that protagonist role, getting to know her, getting to meet her and Sandra [Saad], who does her voice. She is just so talented, charming the pants off of everybody she met at New York Comic Con. So being able to have this character that people can say, ‘I’m a fan, like her. I’m trying to find my place in the world, like her. I want to figure out how to become what I’m destined to be.’ I think that is instantly relatable and I think people just fall in love with her.”

”I think [her background as a Muslim American] will definitely be visible for those who look for it, yes.” Amos also confirmed with a smile when asked.

Diving on the chance, we asked whether Kamala’s favourite hero and namesake Carol Danvers – formerly Ms Marvel, now better known to fans as Captain Marvel – would be seen in Avengers. Would Kamala get to meet HER personal hero?

As a cherry on the top of the Avengers cake, we were able to go hands-on with Kamala and check out her various abilities. Playing in the game’s HARM room — an analog for the X-Men’s Danger Room — this build of Avengers featured Kamala in her full Ms Marvel costume, unseen in current promotional materials and her reveal trailer. Faithful to her original and most iconic costume in the comics, the game’s version does feature some additional embellishments that show how much care has been given to her design.

The leggings of her comics costume have been tweaked into pants here, with ever-valuable cargo pockets for our girl to carry all those plot-relevant items she’s bound to pick up. The blue body piece of her costume also features intricate but subtle pattern detailing, likely a nod to her Pakistani heritage. While such extra complexity could make the costume hard to read, here it is only visible when the costume catches the light, preserving her iconic silhouette.

In combat, Ms Marvel is very much a brawler. While the version of Kamala we played as only had around 25% of her total ability suite available, there was already enough to keep combat interesting. With abilities working on a cooldown timer, you’re challenged to use Heroic skills strategically to control enemies as their numbers build or greater challenges drop in. Kamala’s self-healing move allowed us to get out of a close call when enemies swarmed, though at this early stage of her skill tree the ability to use it seemed to come very slowly.

Other skills made for a lot more fun — one allowed Ms Marvel to single out one enemy with her embiggened oversize hand and smash them against the nearest surface, making for an easy and comical KO for one unlucky AIM stooge. The most impressive skill however, was Embiggen – with this, Kamala grows to twice her normal size with a flourish, and becomes an enemy-crushing behemoth. While her greater size does make her comparatively slow to control, her sweeping attacks can shut an enemy ambush down in seconds. Even the imposing AIM tanks that were thrown at us in this combat challenge were no match for a few well-placed punches and kicks from Jersey’s favourite (and biggest) hero.

Overall, Ms Marvel’s combat style seems fun for those who enjoy getting in-your-face with this type of action title. Her moves have good range, though I instinctively kept going for a double-jump my brain expected but wasn’t there. Her ability to dodge felt shallow and too short for some of the wide-swinging enemy combat patterns, making it hard to get out of range of AOE attacks even with early warning.

Kamala’s ability to stretch and jump high ledges for traversal of vertical combat spaces – handy for taking out rocket-firing enemies in their perches – and the fact that we kept accidentally having her hang from the edge of platforms hints at parkour-style traversal gameplay to look forward to as well. And who knows – a lot of these minor niggles could be addressed with an expanded skill tree once the game is available at retail. For now, Kamala Khan’s embiggened fists seem to be giving two thumbs-ups for this title’s future.