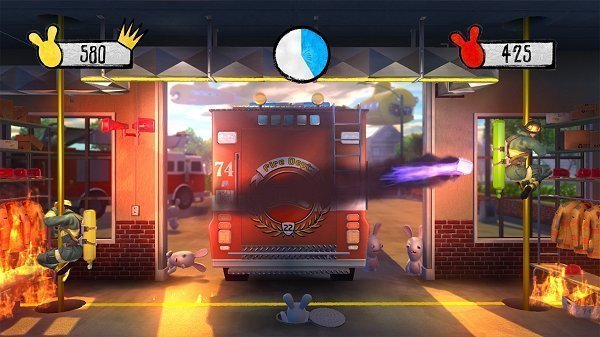 I’m a console snob. I own an Xbox 360 and a Wii, but the gimmick wore off fairly quickly for me and Nintendo’s current-gen effort sits unused in a closet. The only time the Wii gets plugged back in is when I’m entertaining – games like Mario Party, WarioWare, and Rayman: Raving Rabbids are hardcore- and casual-friendly, and end up being a ton of fun.

Now, thanks to the preview at Ubisoft’s Ubinights Melbourne event, I know I can satisfy my desire to jump about like a moron AND get some ultra-satisfying unlocked achievements with Raving Rabbids: Alive and Kicking.

Ditching the “Rayman” moniker two games in (and rightfully so), the Rabbids have been front-and-centre in countless mini-game titles on Nintendo consoles. The keywords of importance here are “mini-game” and also “party game” – if you’ve never experienced a Rabbids title before, they’re best played with friends (four players max). Oh, and drunk, if you’re of age.

From what we saw, the game is standard Rabbid fare; using Xbox Kinect, choose a mini-game, get a brief tutorial on what you need to do and how you need to do it, and then off you go. I got to play in a Pong-esque scenario, where in Rabbid style, a flaming marshmallow was substituted for the standard ball. Set in a Fire Station, my opponent (the nefarious Jasper Schultz!) and I were fire fighters stationed on our fire poles; crouching slid us down the pole whilst lifting our arms moved us back up. The objective was simple: get in the way of the marshmallow so you hit it back at your opponent. If you missed, your opponent gained points.

I also got to see a Whack-a-mole type game where you used your feet to smoosh Rabbids as they popped up. It reminded me quite a bit of the “stop the leaks” game in Kinect Adventures (which, admittedly, I liked). Oh, and also of “Whack-a-mole.”

Additionally, there’s a “make the shape” type mode where players have to work together to roughly resemble a target shape on the screen. That reminded me quite a bit of the paint splash Kinect demo where the Mom made herself into an elephant – remember that? Now, if only Ubisoft can somehow get the rights off Milo from Lionhead, we’d be laughing. I’d love to see what Rabbids would do to that sad little child.

Raving Rabbids: Alive and Kicking delivers a strong Rabbids experience on Xbox for those who may have missed previous Nintendo outings, and makes for a satisfying party game. Watch for it on 3 November 2011.