I honestly didn’t think I’d like HoloLens. How wrong I was.

Stevivor was invited to a special Halo 5: Guardians session at E3 this morning that used Microsoft’s new HoloLens technology to brief us on new game mode Warzone.

Arriving at a preview space decked-out as a UNSC facility, my fellow journalists and I were fitted for the mixed reality (MR) device. Turns out, I’m a 62.5; that’s the distance between my eyes as measured by one Microsoft tech. As another calibrated that measurement, I slipped the HoloLens over my head and used an adjustable band at the back to make it snug. Once everything was set to go – and this took about twenty seconds, by the way – the wall in front of me was overlaid with UNSC holograms.

The HoloLens viewport is basically clear glass with a slightly different rectangular slot set directly in the centre of your vision. I was able to see everything around me perfectly, and when I trained the rectangular area onto certain objects, HoloLens kicked in. 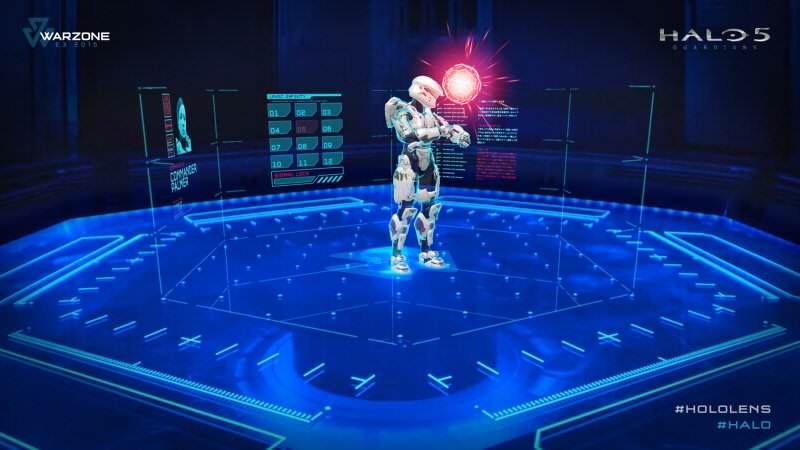 Through the technology, the voice of Spartan Commander Sarah Palmer told me to look up and to the left. As I did so, the all-too-familiar diamond-shaped Halo waypoint marker popped into view in the corridor ahead of me. As I walked toward it, the distance beside the waypoint decreased. Arriving at my objective, I was told to look into one of the UNSC facilities ‘windows’, and as I did so, what once was a normal was opened to show a lovely render of a Pelican getting ready for take-off.

Moving deeper into the facility, an octagonal table sprang to life as Spartan Palmer materialised into view before me. From there, a five minute briefing on the ins and outs of Warzone took place.

I was blown away.

Kinect was sold to us as a game-changer but ultimately fell short. HoloLens, on the other hand, does exactly what we were told it would do. Like in the Minecraft presentation at the Xbox press conference, the device projects computerised constructs wherever you look. More impressively, it also can track your eyeline. Waiting for the briefing to begin, a hologram of the UNSC Infinity was projected before me. As I moved my gaze from its engines to its bridge, the HoloLens picked up on that and threw up schematics offering more detail on whatever – literally – caught my eye.

I’m still not entirely sure how the HoloLens knows how to project items. It was obvious that the briefing table, the wall in front of me and the wall that also doubled as a window had identifiable markers to use, but the empty air in the hallway that threw up my waypoint markers sure didn’t. For now, I’ll just assume it was a neat little bit of magic.

HoloLens isn’t as bulky as I thought, and provided an exciting little experience that differs greatly from those I’ve experienced with the Oculus Rift and Sony’s Project Morpheus. I can’t imagine anyone will experience any motion sickness as you’re really just wearing expensive sunglasses and actually taking in (mostly) real-world sights as you move around your environment.

As cool as it was, I’m worried that HoloLens is too gimmicky – it needs to be said that we didn’t wear the devices during Halo 5: Guardians gameplay. It obviously has applications for titles like Minecraft — and in life in general — but as a gaming device, I’m yet to be properly convinced.