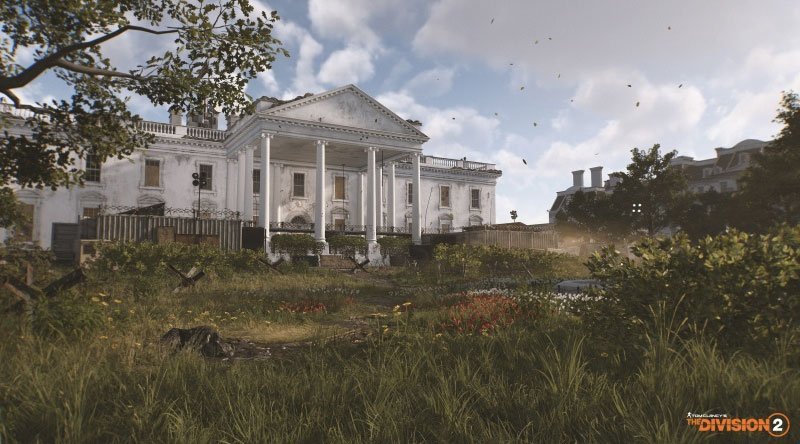 The Division 2 sets a simple scene. It’s seven months later, society has started to rebuild after being desolated and we’re in Washington D.C. at the heart of the action. It’s not only set in Washington D.C., it’s a 1:1 recreation of the city.

The shift to D.C. wasn’t always on the agenda, but as the pioneering stages of development endured, it became the only option. At Gamescom this week, Level Designer Manny Diaz explained that Seattle and New Orleans were both explored as very viable options, but ultimately The Division report to the President of the United States, so that is where they should next report.

They were also looking for a more diverse environment, coming from the harsh war-torn concrete jungle of crippled New York in the midst of winter. Developers, let alone players, became tired of dull tones of grey contrasted against charcoal like a Mark Zuckerberg t-shirt, and wanted a more diverse and colourful environment.

Outside of the restrictions of a snowy winter, Washington DC offers a warmer climate and a range of urban environments nature has started to reclaim, and natural environments urban society has been forced to venture deeper into.

The map is split into six different environments, or zones, which each appear to have a unique feel. There are a couple of residential districts, but the poorer people were forced to stay longer and the state of the remnants of their former homes tell their own tale contrasted against the wealthier citizens who got out earlier.

There is also a commercial district, the political area, and a historic zone that contains all of the iconic monuments of Washington D.C. that disrupt the established cover mechanic The Division was originally built upon. Diaz explained it forced them to rethink the mandatory cover system that had been in-place since the beginning.

“It was a concern to introduce such big open spaces,” said Diaz speaking of monuments such as the Lincoln Memorial, Roosevelt Island and, of course, the White House.

“The Division gives protection through cover, and we always had cover within 5 or 10 metres [in the first game]. But we had to include the monuments, and it made us rethink how we applied cover. We decided it would be better to have these open spaces and to encourage players to work together, so you need to ask your friends to cover you while you’re moving into these big open spaces.”

The whole thing has as “life moves on” vibe to it. Citizens have started to pool their resources and rebuild, but so have their enemies. Humanity is becoming stronger, but with a blur between the good and the bad, that doesn’t mean things will be easier.

I’m sure he tells it to all of the media, but Diaz smiled as he explained the internal little saying unofficially attached to production at Ubisoft (or perhaps mainly at Massive Entertainment). “We like to say ‘get your Hemmingway on’ in regards to experiencing new places,” in reference to Ernest Hemmingway traveling to Paris before writing about it. Massive spent considerable time, by the sounds of things, being a tourist and messing about in Washington D.C. They’ve hit all the tourist attractions, including the White House, and made it a focus to include key reference points for anyone who has visited D.C. before.

“The Air and Space Museum is the most visited museum in the world. If anyone has visited Washington D.C., from anywhere in the world, chances are they have been there. We want them to recognise it, with a Division look, and realise they’ve been there from playing our game”.

For those who call it home looking for more than the global landmarks, software, which wasn’t really explained beyond being called “Geographic Information Systems”, helped map the city in a near-perfect 1:1 ratio. It ensured every street is the right width, every building fits is specifications and even that every tree is in the right place.

The audio also proved to be key to replicating one of the world’s most famous cities. The hustle and bustle of daily life didn’t accurately represent the fiction of The Division 2, so Massive Entertainment recorded the city late at night and in the early hours of the morning. Without the overbearing noise pollution of buses, trucks and peak hour traffic, they captured something similar to the world of their daytime, at night.

The Division 2’s success ultimately lies with its gameplay, ability to learn from the original game, and adapt into a 2019 game established to live well beyond. I haven’t seen much beyond the new location and level design, but if this care and rethinking extends to the entire game, The Division 2 could repeat history and snatch a bunch of the Destiny community again, and this time it might even keep them hanging around long-term.

Ben Salter traveled to Cologne, Germany as a guest of Ubisoft. The arrangement does not impact our Ubisoft coverage, nor limit additional Gamescom coverage. Ubisoft covered flights, accommodation and some delicious schnitzels.