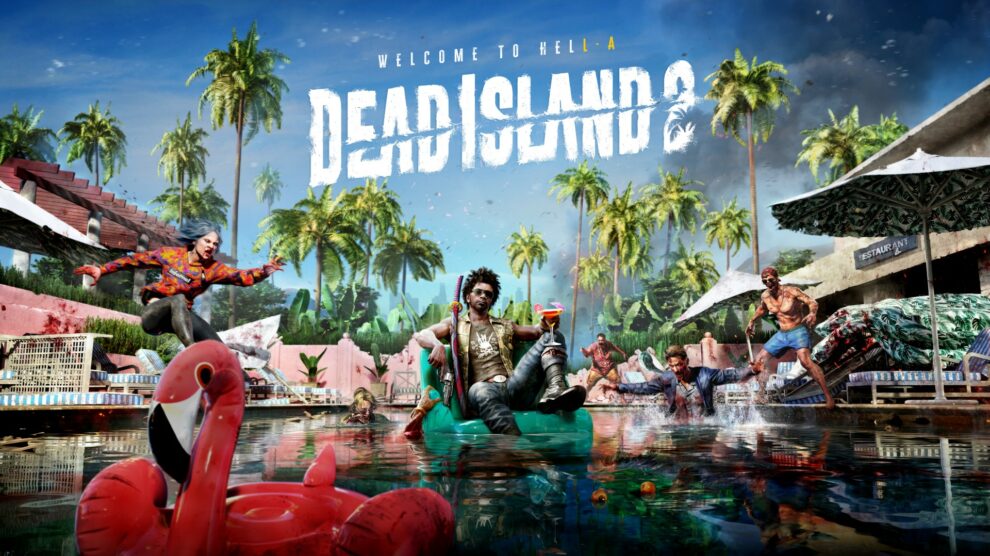 In a wholly different kind of island.

Dead Island 2 has returned from the dead — sadly, a little earlier than planned thanks to an early Amazon listing — and Stevivor was able to sit down for some hands-on play and discussion with developer Dambuster to learn more about it.

“Dambuster Studios is very proud to finally show off all our hard work — and we have been working very hard,” said Creative Director, James Worrall.

“In 2018, Deep Silver Dambuster Studios started development of Dead Island 2. We locked Los Angeles as a setting, right? It’s a great spin on ‘the paradise gone to hell,’ which was a theme that was set with the original Dead Island. We know that Los Angeles has loads of potential for iconic locations full of character, especially when it comes to the NPCs andsome of the characters you’ll meet along the way.”

First announced back in 2014 — in fact, I attended a hands-off session with it back at that year’s E3 — Worrall said everything in this new iteration was “built from scratch” with “nothing held over from before”. In short, it’s a whole new game… and that makes sense as development on the title has changed several times in the span of nearly ten years.

Amazon’s listing was indeed accurate — players will indeed be able to control one of six characters, each with the own unique personality and way of looking at a situation. While Dambuster wasn’t able to speak to most characters to any degree, we were introduced to Amy as part of our preview. 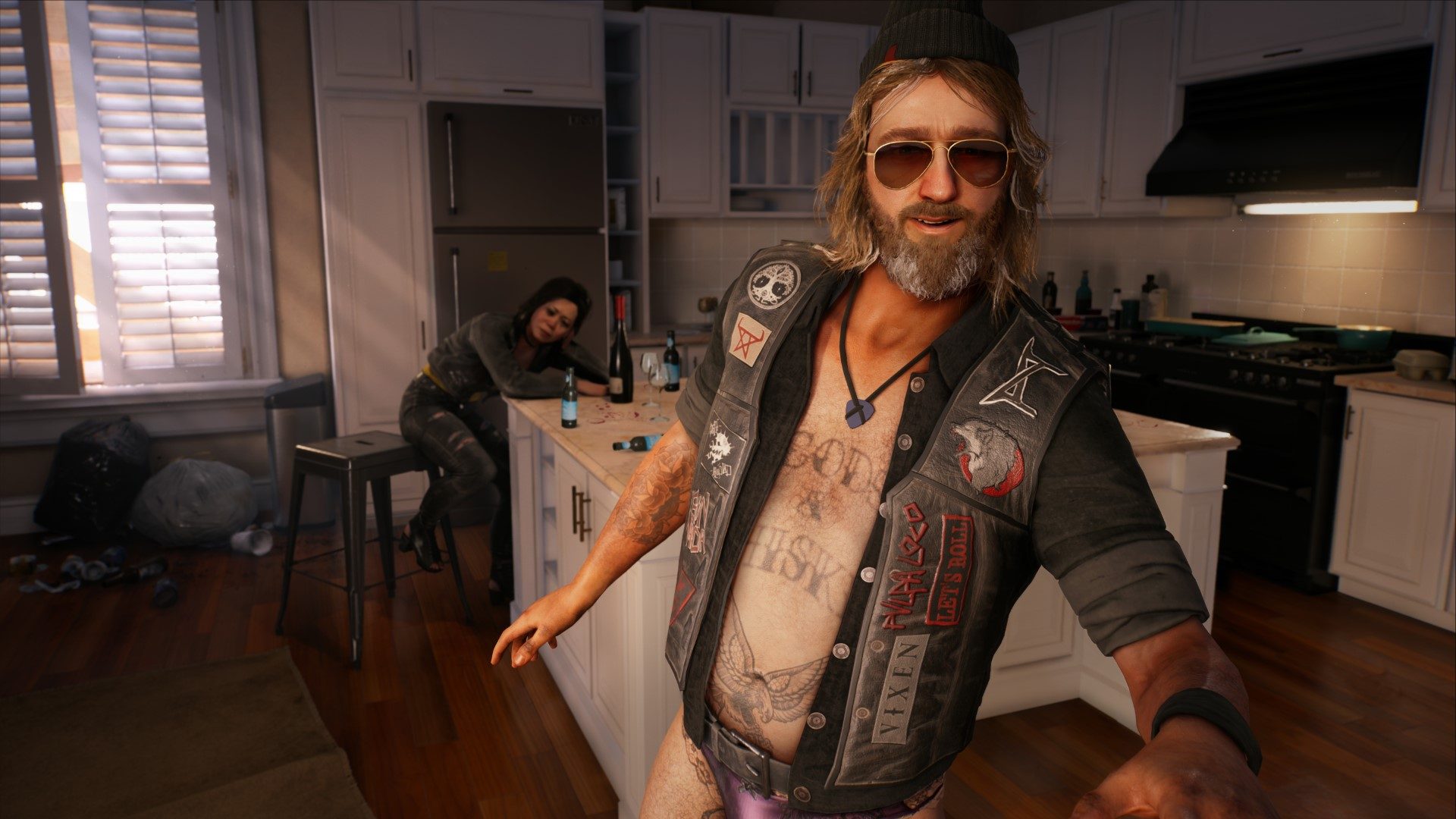 Amy is certainly a wise-cracker, though one with a heart of gold; she was described by Worrall as “the most positive of all our characters”. Amy is extremely athletic and is an active sprinter, something that’s reflected in the running prostheses visable on each of her legs.

While players won’t be able to customise the characters themselves, they will be able to tweak how they all play.

“We give players an amazing arsenal of upgradable melee and ranged weapons, and a highly customisable skilled card system, ” said Dambuster’s David Stenton. “This allows players to customise their own skill deck to suit their own playstyle.”

In the twenty minutes of gameplay I experienced, I was clad with a number of melee weapons and firearms. The firearms initially seemed like the best idea against the horde, but ammo seems scarce. Instead, Wolverine-like berserker claws and long-range axes and poles were my friend. Quick hits got me out of many scrapes, while holding down the attack button on a lone enemy was great to send my weapon straight through its head. Zombies are relatively slow and can be corralled into groupings you’re generally okay to manage, but don’t get too comfortable — you’ll never truly be prepared for one that gets a sudden burst of speed, or another that will launch itself at you from quite a distance.

If you’re really in a jam, you can once again rely on Rage mode — that is, if you’ve got your Rage metre filled — to buy some time. 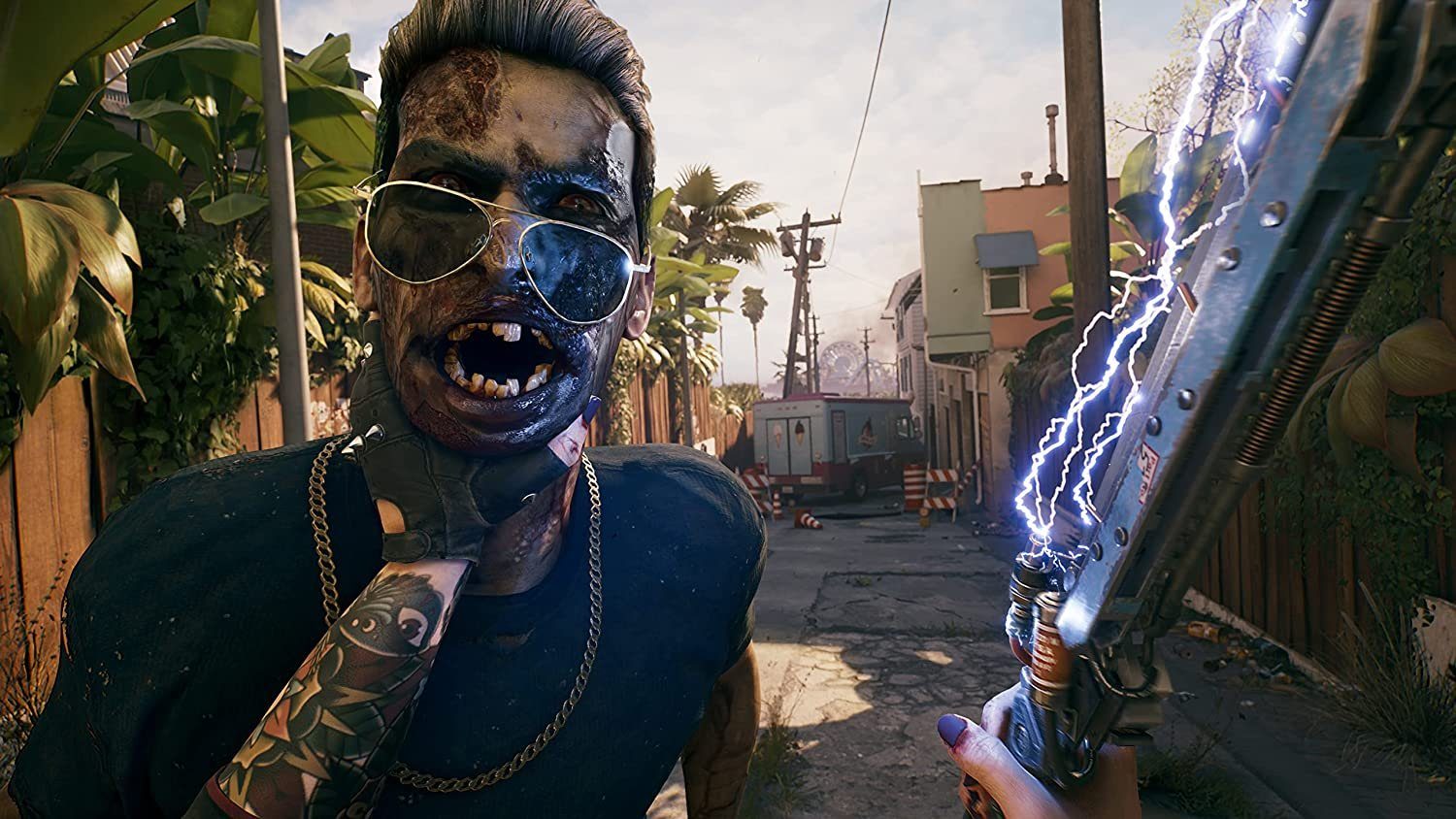 This sequel has ditched its titular island in place of a much larger one: the United States of America. Regardless of whether or not you view the country as an island or not, Dead Island 2 takes place in the Los Angeles area and surrounds. Dambuster has taken to calling the area “Hell-A”.

“Our zombie apocalypse takes place in the City of Angels, and we take players on a fantastic rollercoaster ride through many of the picture postcard locations of LA,” said Stenton. “The beaches of Venice and Santa Monica, the mansions of Bel Air and beyond.”

The open spaces of California will function as an exploratory sandbox in both single-player and co-op modes (though Dambuster wasn’t prepared to talk about co-op just yet), with an elementally-charged melee combat system bolstering things.

“Visceral combat is our main gameplay pillar; we’ve spent probably an unhealthy amount of time passionately developing our own gruesome gore tech which internally, we codenamed ‘Flesh’,” Stenton said. “That’s the fully locational, evisceration system; this allows players to slice, dice, chop… and dismember zombies in all kinds of incredible, stylish ways. In Dead Island 2, this is all fully procedural.”

Flesh isn’t just about lopping off limbs, but impacting the on-screen flesh of your zombie opponents as well. Dotted throughout the sandbox are opportunities to reign fire, acid or surge electricity through the bodies of the undead shambling at you, and you’ll see your targets’ bodies reacting accordingly. 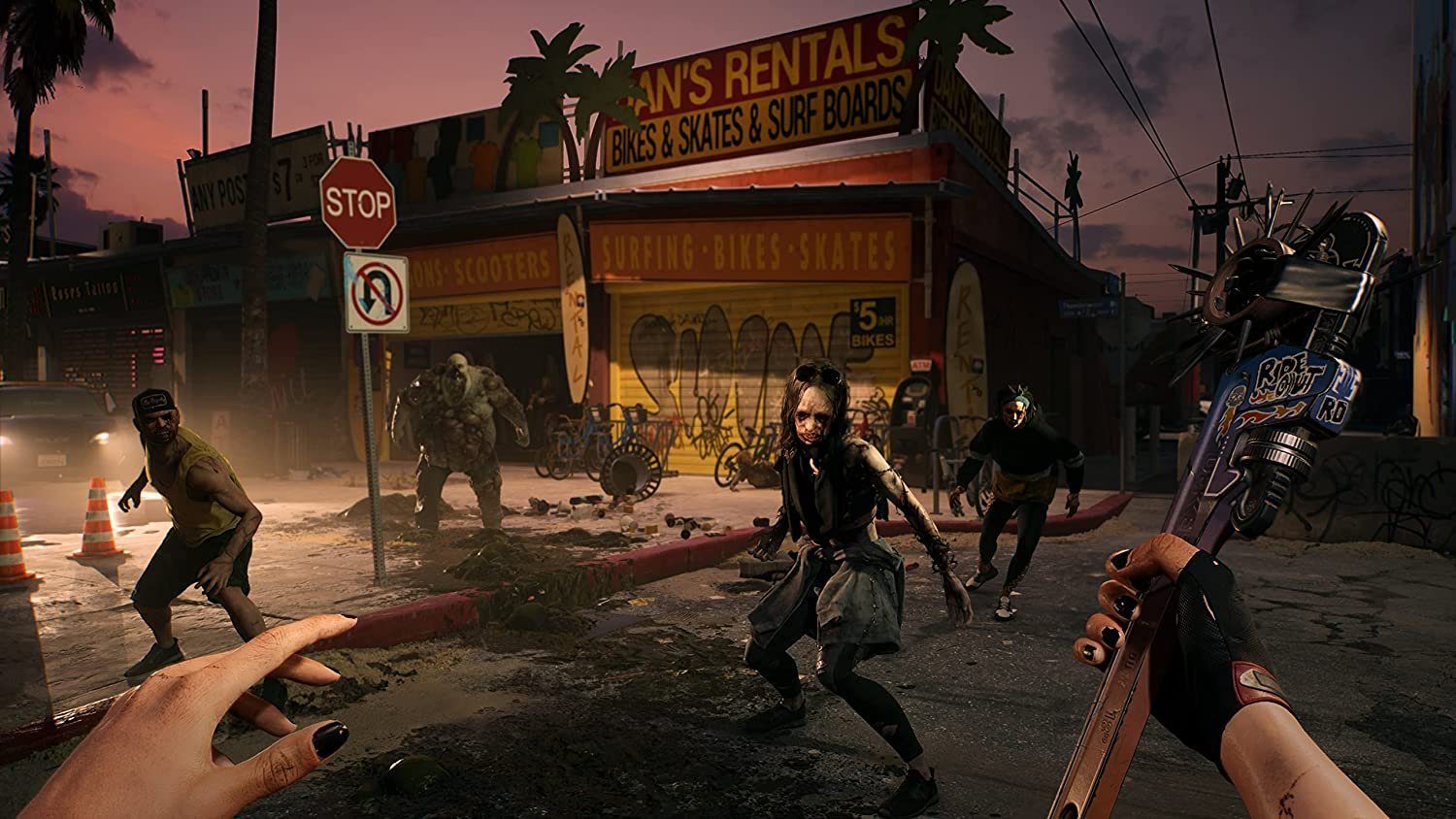 Answering a question about the system posed by fellow Aussie outlet AusGamers, Stenton said Flesh is quite intricate, with individually modelled internal organs and skeletons. In short, no two zombies will ever be ripped apart or have their fresh burned off in the same manner.

While fire and acid can cause that literal melting effect, my hands-on play was more about electrical damage. I had a customisable card that provided electricity damage to certain melee weapons; combined with puddles of water, I became an unstoppable force.

Well, I’m talking myself up and certainly didn’t feel like it at the time — with so many zombies charging me at once in large sections of my playthrough, was generally in full panic mode. I was sometimes only noticing that I could throw water at baddies, or damage tanks of water on the backs of former sanitation employees; I mistakenly thought that cleaning zombies somehow robbed them of power.

“Water as an offensive ability is really combined with an electrical attack, so that sort of amplifies the both the range and the effect,” Worrall explained. “You can lure zombies into into puddles and kick zombies into into electrical stuff, and that will link them all together.”

Water is also effective in many other ways, Worrall pointed out. 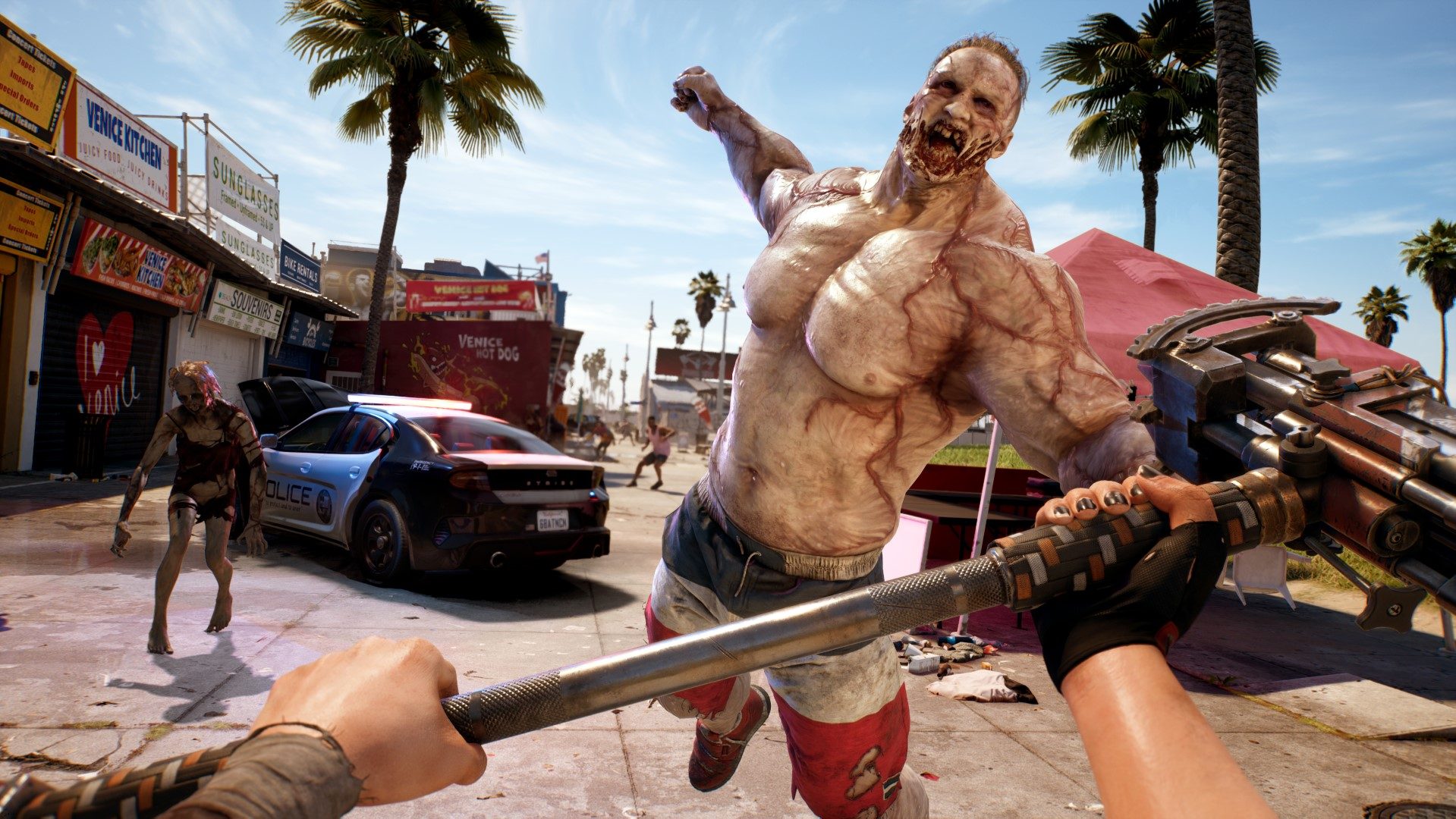 “All the pipes in the game are smashable, right? You [might] notice that there’s a pipe up on the ceiling and then you can shoot the pipe with a gun or or throw a weapon… and that will spring a leak. It will form a pool that [could become electrified]. Sometimes you can get so many chain reactions going on.”