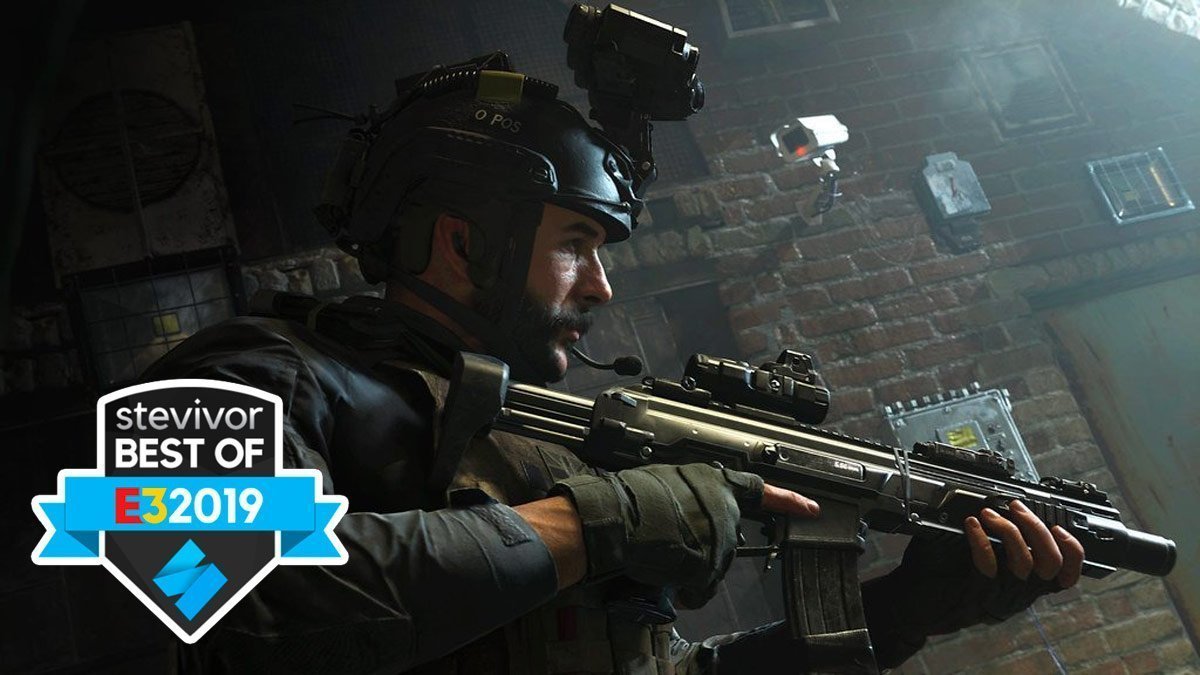 Infinity Ward returns to what it does best with a new, darker take on Call of Duty.

It’s fantastic to see Infinity Ward return to form with Call of Duty: Modern Warfare. Ghosts was the product of a development team unsure where to turn next, and while I enjoyed Infinite Warfare, it was too far removed from Infinity Ward’s strengths. Modern Warfare feels like home. Just prior to E3 2019, we were treated to a single-player showcase, where the developers presented their interpretation of what modern warfare looks like today — it’s not 2007 anymore.

Infinity Ward isn’t shying away from the importance of its single-player campaign in Modern Warfare. Activision always staggers the reveals, so each of the three modes has adequate time in the sun. But even so, the campaign is clearly front and centre, flanked by multiplayer and spec ops, and together they form a more cohesive unit in Modern Warfare.

“We don’t want it to feel like three games in one box,” Campaign Design Director Jacob Minkoff told Stevivor. “We want it to feel like single-player, spec ops and multiplayer are all of a piece, that they are consistent. That’s one of the reasons we chose to go with spec ops over zombies, because that allows us to continue the single-player story directly into spec ops. Spec ops continues the story, and it even goes into multiplayer. All of our story, and all of our mechanics, are unified across all modes.”

Modern Warfare is a reimagining not a sequel. There have been a handful of games this generation that have shaved their numerals and subtitles. Hitman immediately springs to mind, which also successfully navigated the even murkier waters of a sequel — we already had a very different Hitman 2 before last year’s instalment.

Infinity Wards knows it’s not a clean break with Modern Warfare. For starters, it’s already a subtitle. A direct comparison to Hitman would be if this game was simply called Call of Duty. We also already have a Modern Warfare this console generation — Call of Duty 4: Modern Warfare Remastered. Art Director Joel Emslie, who returned to Infinity Ward after working on the first two Modern Warfare games, told us the development team originally pushed for the 2007 game to drop “4” from the title, but Activision wouldn’t allow it. I’m sure they are very happy that suggestion was rejected now, but I can’t help but smile thinking Infinity Ward’s first Modern Warfare game as a four in its title, but its fourth one doesn’t. Infinity Ward knows there will be ridicule, but cops it on the chin and is certain the player base will be quick to move on.

The game itself is very different. A lot has changed since 2007. Enemies aren’t necessarily soldiers wearing uniforms, and certainly aren’t outrageous caricatures of megalomaniacs. Civilians might pose a threat, and with mobile phones so prevalent, a mistake will soon become public knowledge.

Good and evil, right and wrong, are matters of opinion. Modern Warfare is changing how Call of Duty tells its story. To avoid spoilers, we didn’t see much of it, but were left with a reassurance that there are no black and white heroes and villains; war is entrenched in shades of grey and that’s how it’s depicted. From each party’s point of view, they are seen to be doing what must be done; what is right. There was a strong hint that the player will see his or her actions as heinous from the other side’s perspective. There are Western, Middle Eastern and Russian enemies, but they are also all portrayed as allies. That includes the United States, who still assume a starring role, but will also be an enemy in Modern Warfare.

Infinity Ward kept returning to its theme of realism. This is the most realistic war game the developer has ever made, but it’s largely set in a fictional Middle Eastern country, rumoured to be based on Afghanistan, to avoid political issues. Instead, it channels the realistic spirit of war. You will continue to play as Tier 1 Professional Operators, modelled on real world counterparts. But you will also play some missions as rebels, the civilian fighters doing everything they can to survive. They don’t have the same resources, and succeed on pure determination fuelled by adrenaline, not special training.

We saw two hands-off missions that embodied these qualities. The first, Town House, followed a squad of four, led by a recast Captain Price, as they navigated the tight confines of a British three-story town house. It’s in stark contrast to the sprawling open levels we are used to seeing in Modern Warfare for two reasons: it’s more realistic, this is what special forces actually do, and the AI finally allows it. In previous games, the sizeable levels covered deficiencies in the AI. Now they are able to manoeuvre and make the right decisions in tight spaces. You will need to do exactly the same. In this context, war is about decision-making. As he reached the third floor, we saw a soldier breach a room seemingly occupied by a hostile, only to find a mother with a crying baby.

In another room, we encountered a bickering couple. At a glance, the apparent civilians didn’t seem to pose a threat, but then the woman motioned for a weapon. The player had a split second to decide to take her out before she could fire. Identifying threats and making the right decision is a big part of Modern Warfare.

“We wanted to ground it more and take it back down to its essence,” Minkoff told us. “That means making these closer characters dramas. Even in the gameplay, in the town house sequence, it’s not about waves of a hundred enemies. It’s a single house that has a few rooms and around 10 people. You need to figure out who is the enemy. That was where we really needed to take the game to make it have emotional impact.”

In these smaller levels, it’s a combination of the enhanced AI and the 1:1 environment that makes it feel realistic.

“In most games the conventional wisdom is to scale up your environment by about 30%,” explained Minkoff, after telling us the town house is one-to-one with a real life building of that size. “Because you need room for the camera, the collisions, the physics, and the AI. The AI is going to get stuck against things and it only has so many animations it can use to get around a corner.

“We did a huge AI lift to make sure we could put everything into a space that feels real. The moment we put people in an environment where the door frames come up to the right place on a person’s shoulders and where stairs are only wide enough for one person, people look at it and ask ‘why do these guys feel so real?’ It’s because we’ve gone real scale with everything. It looks like what you would see if you were photographing this with a camera.”

I hadn’t really noticed the importance of scale before, in any game, and its correlation with realism. The size of a room and the animations AI enemies use to move around it isn’t something we actively think about, but it clearly affects our perception of a space and ability to relate to it. The element that did consciously astound me watching Price and his colleagues approach the town house was sound. As they approached, a train raced by and rattled the walls, replicating the sound of every cheap British hotel I have ever stayed in. Sound design is amazing in the games industry, but this was uncanny.

“We have gone to great lengths to capture all these sounds,” said Minkoff when I asked him about its role in Infinity Ward’s quest for realism. “Rather than doing sound design, where you kind of fake it in the studio, we’ve gone as far as having dozens of microphones in real life locations getting the necessary sounds for the game from many different perspectives.

“Then in the game, we have a system that physically calculates how sound reflects off of surfaces. So if you fire a gun in a tight space, and that space has some metal or tiling, you’re going to get that reflection come back to you really quickly, and it’s going to sound really tinny. But if you fire the gun in an open space, with a bunch of tall buildings, that reflection is going to come back to you with more echo. We also simulate sound, so if you see an explosion in the distance and it’s far enough away, you’ll see it happen before you hear it.

“That’s across all game modes.”

The second mission went off the books. Set 20 years in the past, we weren’t playing as a soldier, or even a rebel fighter, but a child, a young girl of 10 or 11. After watching her father get shot by a home invader, a burly brute armed forces man, we saw her panic and race around the house, fighting him with whatever she could muster and attacking him several times with a screwdriver out of sheer desperation. The realities of war are bleak, but seeing it through a child’s eyes, a child forced to kill to survive, takes Call of Duty to a very dark place. I haven’t felt as emotionally invested in a war game since Spec Ops: The Line.

“The game is still filled with many other types of experiences. In Saving Private Ryan, for example, it’s brutal movie, but that doesn’t mean it doesn’t have camaraderie and humour, and it’s those light moments that make the dark hit you.

Minkoff jokingly reassured us that this game is fun to play; it’s the question he is asked most. The two demonstration levels were chosen because they are so bleak and small in scale, which makes them different to anything Call of Duty has done before. They are a lot more personal than the COD we have come to know, but those chaotic missions and large firefights are here as well, and being a Call of Duty game I would bet my house on there being an epic helicopter crash. But that’s the COD we already know; Infinity Ward want us to know there is something new, something smaller and more mature in tone, to explore in Modern Warfare.