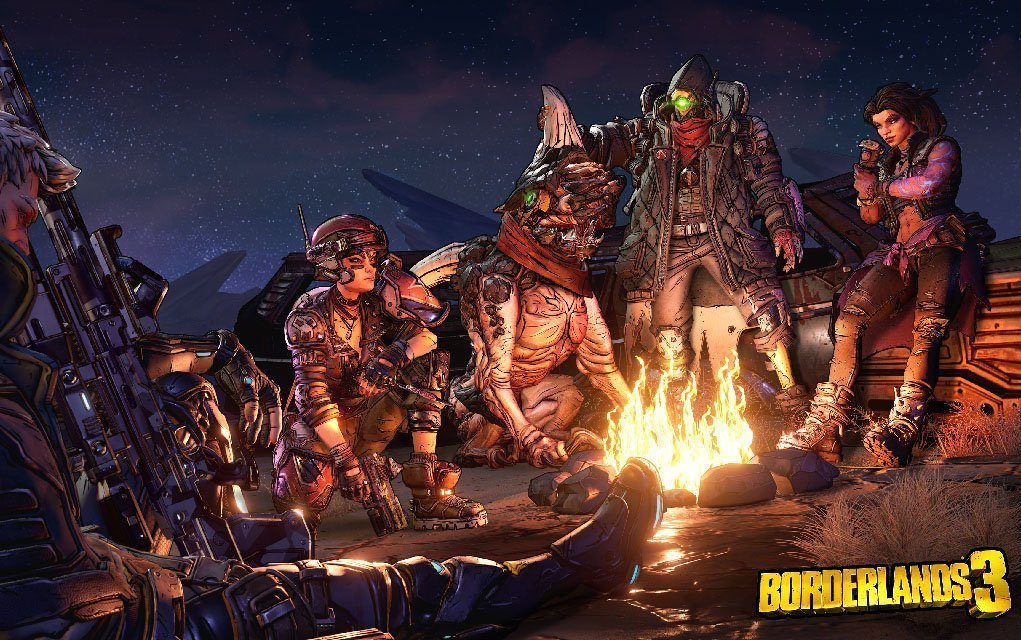 And there's nothing wrong with that.

Borderlands 3 expands the story of the Pandoran Vault Hunters and the Crimson Raiders and sees Lillith, Ellie, Claptrap and the rest of the (surviving) Pandorans setting into space. They do so in order to chase down the greater network of Vaults in the universe, as discovered at the end of Borderlands 2.

Gearbox dropped us into the game from the beginning, providing the opportunity to experience playtime as FL4K the Beastmaster. Possibly the weirdest of the game’s four new Hunters, FL4K is an emergent AI in a mish-mash of a robotic body, with an interest in aggressive animal taming. Each character has essentially the same intro, though BL3 does continue the precedent set in The Pre-Sequel — the player’s chosen Vault Hunter interjects lines of flavour dialogue into in-game cutscenes. It’s a small touch but does allow the character you’ve chosen to develop some character playing against the game’s cast — easily, one of the best elements that The Pre-Sequel added to the mix.

Speaking of elements, flavour text isn’t the only carry-over from The Pre-Sequel. In combat, the cryo element returns, letting you freeze your enemies solid and make gory snowballs out of their corpses. The laser weapon type is also avaliable, letting you deal continuous beam damage to your foes. Alongside the existing array of elements and weapon types, it’s a regular cornucopia of murder options at your fingertips; new options falling out of chests and enemies with a regularity that will wreck obsessive stat-checkers.

FL4K offers one of the most interesting skill trees seen in the Borderlands series to date. At base level, three tiers of skills offer you the option to unlock one of three core pets: a Jabber (a monkey-like creature introduced in-game on the jungle-rich EDEN-6), a Skag, or a Spiderant. Each pet offers a unique baseline buff to FL4K while they are active; additionally, you also select from a different recharging special skill. There’s Fade Away, which lets you cloak and move stealthily, or Gamma Burst which bamfs your pet to a specified location with an explosion of Radiation damage, or finally, Rakk Attack!, which lets FL4K release a swarm of evil dinosaur-birds from their sleeve to behave like enemy-seeking grenades. Each offers their own benefit, but in my time with the game I particularly enjoyed the combination of Rakk Attack! to eliminate troublesome enemies in a group, paired with the Skag pet who boosted my base damage.

In the early game, you are tasked with retrieving the Crimson Raiders’ lost Vault Key, which has passed into the hands of the unknown bandit cult, the Children of the Vault. The evil-Twitch-streamer twins, the Calypsos, have managed to unify the bandits of Pandora into an impressive army of followers, bowing to the two’s every whim like an audience of fans who’d defend their every move, no matter what – not a thinly-veiled allegory to anything in the real world at all! As a newly-arrived recruit to the Crimson Raiders, you’re tasked with helping Lillith and co. with retrieving the Vault Key before the Twins and their army can do any damage with it.

What follows is a greta introductory mission path that gives both a satisfactory introduction to the cast for newcomers, and a refreshing welcome-back for followers of the series. Each layer of complexity – weapon types, shields, elements and skill trees – or parcelled out at a pace that feels rapid without being overwhelming, and accentuates the slight tweaks to what players are used to such as the mantling and slide abilities that highlight the evolved gameplay and level design.

Levels have an emphasis on being more vertical, thanks to these new traversal options. More opportunities are given to explore an area via multiple paths, as well as new combat tactic possibilities such as surprising enemies from above, or The Pre-Sequels rump-rumbling butt stomp which makes its glorious return for those who love a superhero entrance to a combat zone.

Gearbox then jumped us ahead to an area on EDEN-6, a jungle-and-rainforest-heavy planet. With the emphasis on towering trees, the map took us through both multi-levelled treehouses among the branches of these towering trees, and through settler encampments and ruined facilities nestled amongst their bases. These facilities in particular were a favourite of my time on EDEN-6 as the ageing machinery was regularly split apart by encroaching plant life. The juxaposition of the two environments and the strong palette clash created by the level’s elements was possibly more memorable than almost any area in the preceding games. If this level of stark change from Pandora continues through the rest of the planets, it’ll be the best variety seen in the series to date.

Overall, the five or six hours I’ve spent with Borderlands 3 only cements my expectations for the title when it releases officially next month. After a lukewarm reaction to the original reveal trailer, the following coverage (such as the trippy-as-hell “Happy Together” trailer, or the character backstory features) and my experience in Sydney have pushed my expectations way up. This is Borderlands, to its core, just gussied up a little with a fresh coat of paint and some fancy new footwork, the current generation of gaming systems. It’s exactly what you want for the fourth game in an ongoing franchise: respect for what made the game good in the first place, but with the foresight to change what needs changing to make it feel fresh, modern and engaging.

You can rest assured I’ll be boarding the Sanctuary 3 to see what’s good beyond Pandora inside Borderlands 3 from 13 September. Gearbox’s latest will be available across Windows PC, Xbox One and PS4.