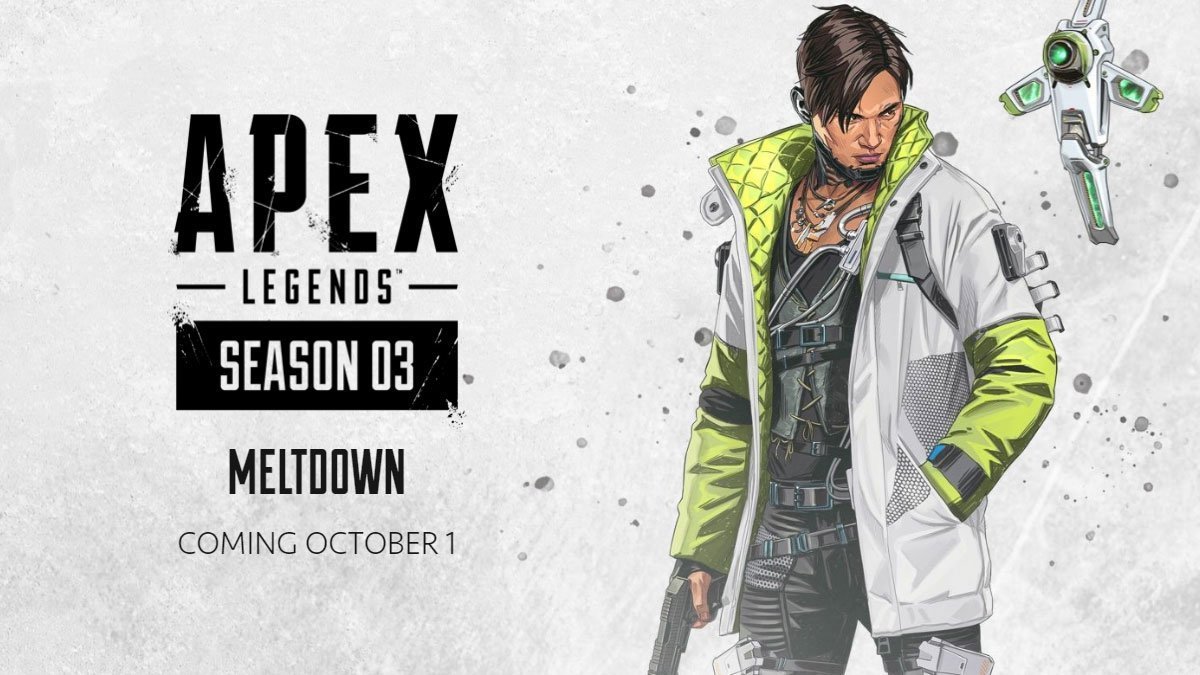 Time to jump back in.

Respawn Entertainment has been quietly working on its largest update yet to one of the biggest surprise hits of this year, Apex Legends. Titled Meltdown, Season 3 will introduce a range of changes including new Legends, a new map, gameplay updates, and more over the course of the next few months.

Kicking off season 3 we will be introduced to Crypto, the latest Legend added to the Apex Legends lineup. Crypto is a hacker whose tactical ability is a surveillance drone. This drone is able to be deployed as an aerial camera that can remotely manoeuvre around the environment while also opening doors, supply bins, or marking enemy player locations up to 30 metres that can also be seen by your teammates.

Crypto’s ultimate is an electromagnetic pulse (EMP) that is charged and deployed by his drone. The blast from the EMP deals 50 shield damage, slows players, and will also destroy any nearby traps caught in its radius.

While Crypto is using the drone he is open attacks from enemy players, so you’ll need to choose wisely when you should remote into the drone. The device can be destroyed quite quickly by a few shots, because of this you’ll need to time the EMP charge correctly otherwise opposing teams could disable the drone before you get your ultimate off.

A new map is heading to Apex Legends, and World’s Edge will be a much larger playground to battle in than Kings Canyon. With some portions of the map covered in ice, and the others flowing with lava, World’s Edge with give players a fresh arena to try and be crowned champion in – Oh, and there’s also a train! You can check out our hands-on look at World’s Edge for more details.

First appearing in Titanfall, the Charge Rifle will handle a little bit different this time around. The weapon sits in the sniper rifle category class and uses energy ammo to deliver a high-powered punch. First of all when you fire the weapon it takes a little while for it to charge up, as this is happening a laser shoots out in front of you causing damage to whatever is in its way. Once the weapon is fully charged however it unleashes a devastating single shot towards your target – it’s like a mix between Quake’s lightning gun, and rail gun.

Respawn has already detailed some of the changes that will be coming to the new ranked series for Apex Legends. Some of these include leaver penalties that will increase for repeated offenders, a change the scoring system that will now count assists, and a cosmetic rewards system where players can earn items to show off their performance during the series.

The developers want to try encourage longer range fights within Apex Legends, so expect to see changes rolled out to the way sniper rifles are handled, and also close range weapons like SMGs.

Disruptor Rounds were very powerful when they were introduced in Season 2, however after a few nerfs Respawn have now decided to remove it going into the start of season 3. Along with this the Skull Piercer Hop-Up is also being removed, so we’ll have to wait and see if both of these end up coming back at a later stage in the season. In their place though is the new Anvil Receiver, a Hop-Up that increases semi-auto damage, but reduces the rate of fire and uses more ammo. This can only be attached to the Flatline or R-301. The other new Hop-Up is the Double Tap Trigger which fires two quick shots each time you pull the trigger. It can be attached to the G7 Scout, and EVA-8 Auto shotgun.

A few of the Legends will be getting some updates, including buffs to characters like Gibralter and Bloodhound, while favourites such as Wraith and Pathfinder will be hit with the nerf stick.

Lastly the Season 3 Battle Pass will contain new cosmetic items for players to unlock, weapon charms will be introduced, and seasonal events appear to be coming soon (keep an eye out for Halloween).