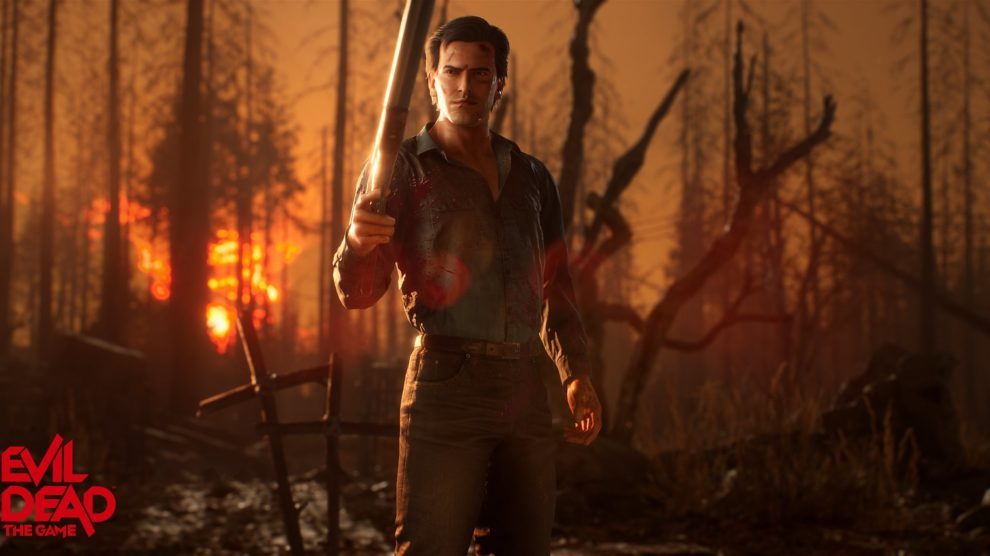 Evil Dead has a series of five single-player missions to complete, with each rewarding extra bits and pieces (sometimes characters, sometimes audio). By far, mission three — Kill ‘Em All — is the hardest to complete, so this guide aims to help you beat it!

Follow along to be the best Ash you can be.

Kill ‘Em All is annoying for a couple reasons: health-giving resources are non-existent once you leave the first area, you’re timed and you need to deal with your Fear Level at all times. Completing the mission requires calm nerves and some strategic planning.

At Faison Farm, you have more supplies than you’ll be able to carry. It’s very important though to pick up as much as you can.

Collect items as quickly as you can; time is of the essense! 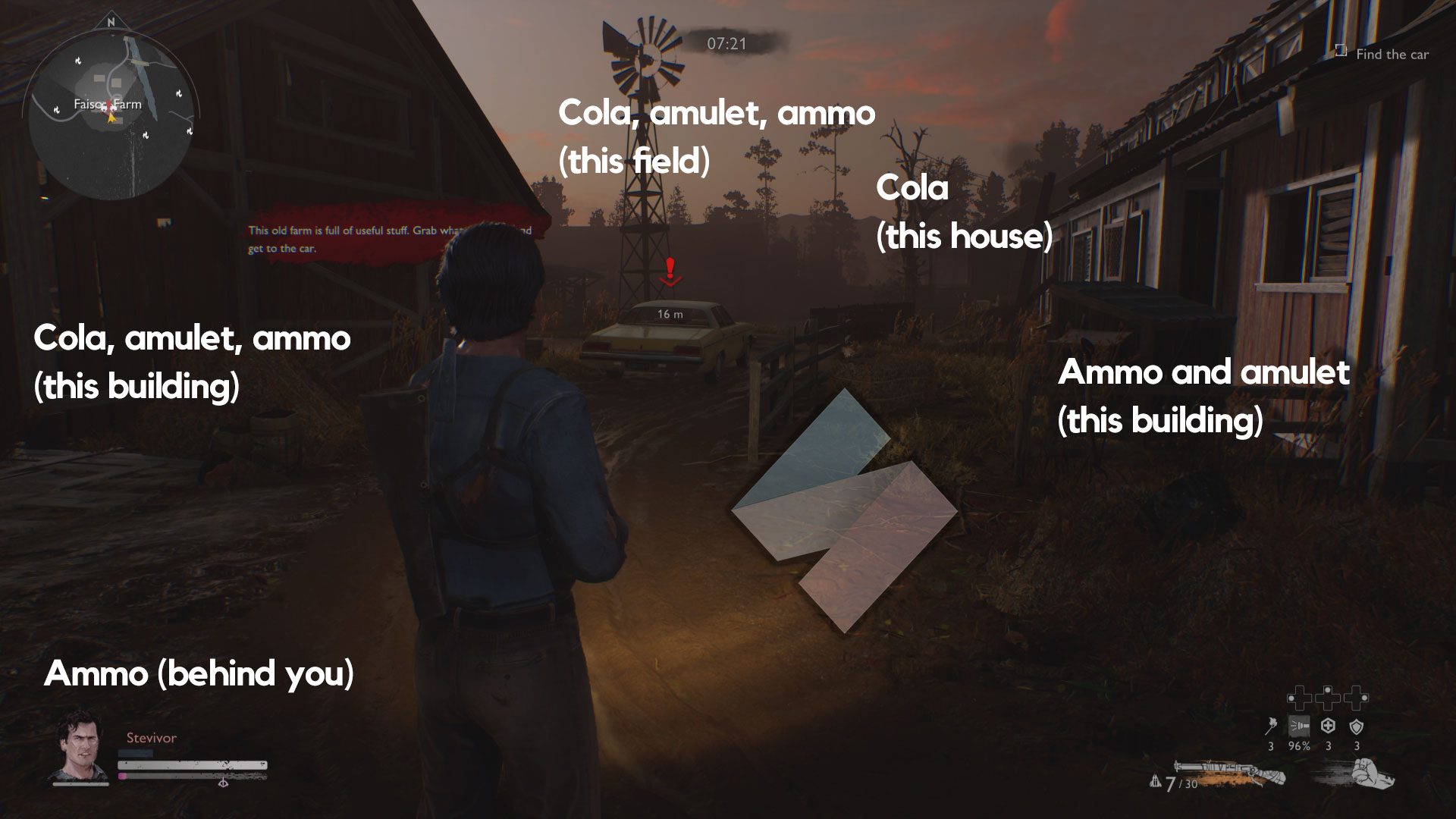 When you leave Faison Farm, you should have 30 ammo, 3 Shemp’s Cola and 3 amulets. You’re stocked up!

Though you’re told to go to the Railway Loop first, don’t. Head instead to the second encounter area just past the Dead End. There, you’ll find a shack with even more ammo (you won’t need) and melee weapons. Those are the important items here.

Grab the axe and head to the first objective.

Here, you’ll need to dispatch 12 normal Deadites. You can shoot them in the head for quick kills or use your axe to hit them once or twice before using a finisher. While in a finisher, you’re animation locked and can’t take any damage. The key here is to try to put distance between you and the enemies and ensure you’re not taking too many hits.

There’s an area up in the top right of the encounter space that not only has ammo, but gives you a good sniping spot.

Once clear, head back to the second objective (ie where you’ve picked up the axe). 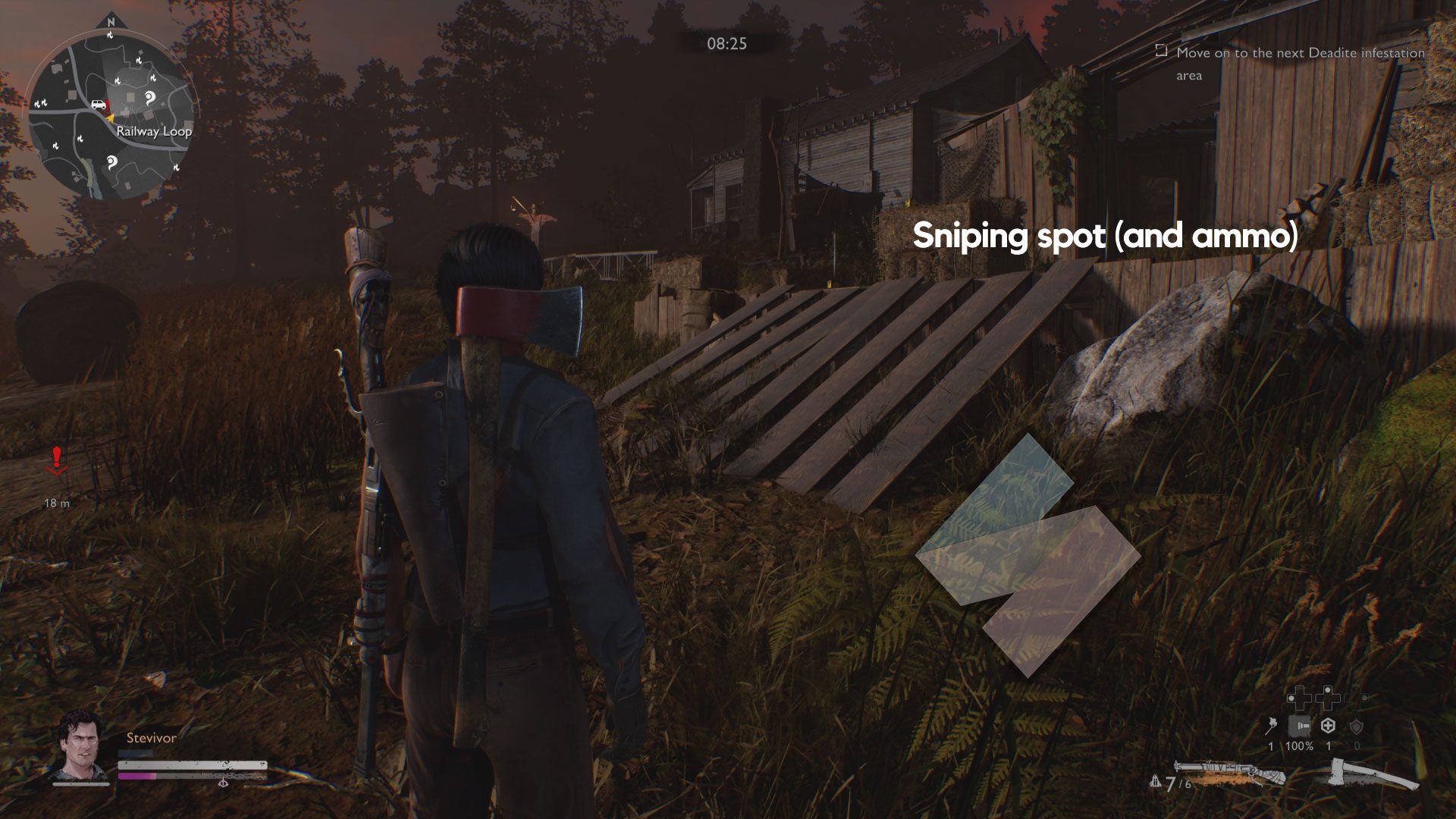 Here, you’ll need to fight and kill 9 total Deadites, with one of those being a Demi-Eligos. Try to use your axe and carbine to quickly fell the cannon fodder and use extra Deadite spawns to your advantage (ie the finisher animation lock) when dealing with the Demi-Eligos.

The boss here will spawn a copy of itself with can be shot and killed with ease, but you’ll need to get up close and personal with the Demi-Eligos proper.

Use your heavy attack (RT on Xbox) and dodge your opponents attacks (using A on Xbox) to keep your health intact while carving away big chunks of its. 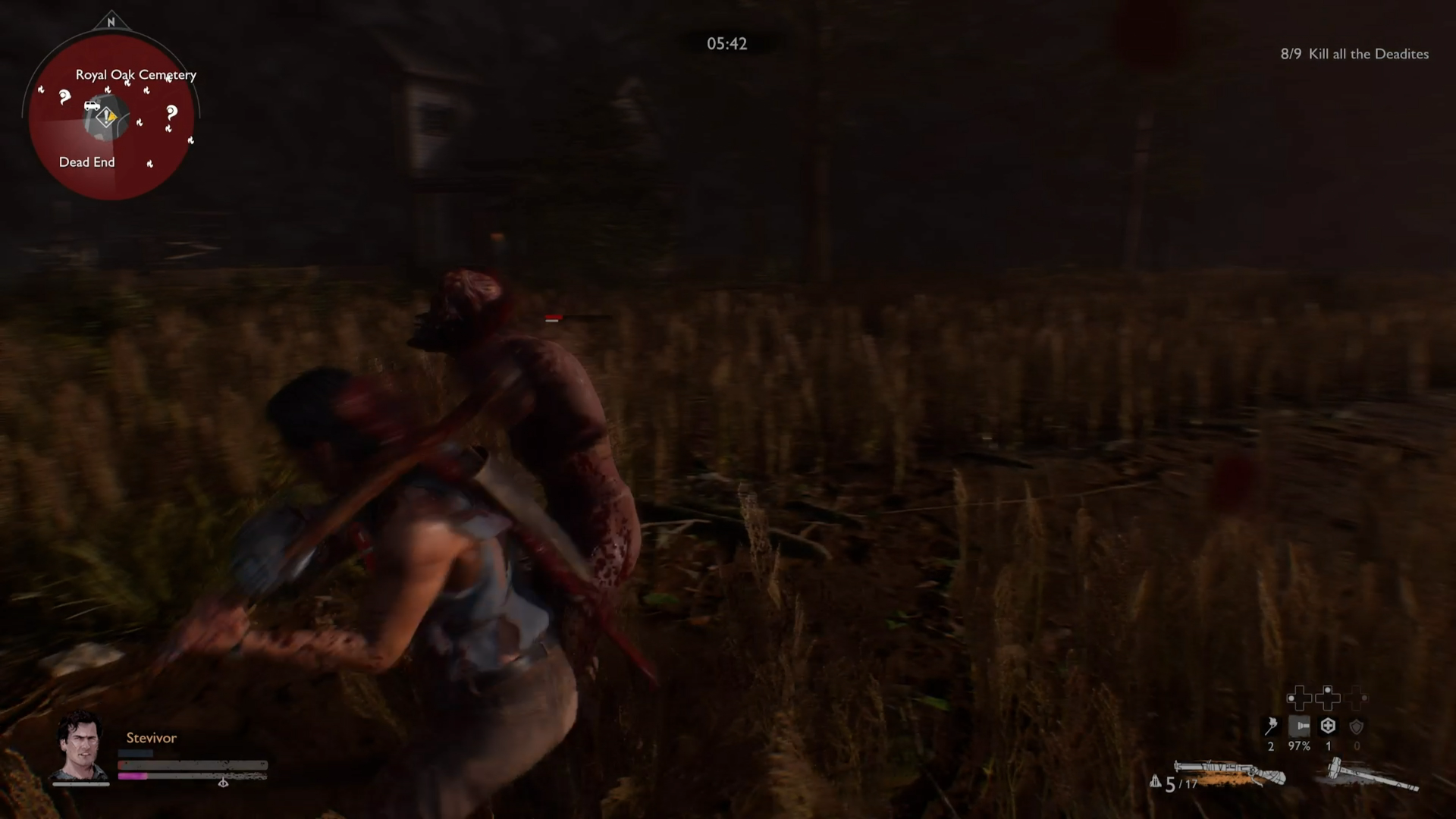 By this point, you should use the firepit to the back of the axe shed to ensure your Fear Level isn’t too high; if it hits max, you’ll automatically fail the mission.

Next is the third and final checkpoint. If you have amulets and cola left over, use it liberally here. The final encounter is easy yet hard, requiring you to kill 4 Deadites, of which one is an Eligos.

Kill the regular baddies in the usual fashion, and then take on the Eligos. He’ll teleport around the map and launch projectiles at you (so use the environment to your advantage, blocking them) and try to run up for some heavy melee attacks when it’s close.

The fight itself isn’t too difficult, but your real enemy here is time — I finished this mission with 0:04 seconds left, resorting to my carbine cause the enemy kept teleporting WAY too far away to use melee attacks.

Good luck (and be prepared to run this a couple times just to get used to where items are and enemies spawn)!