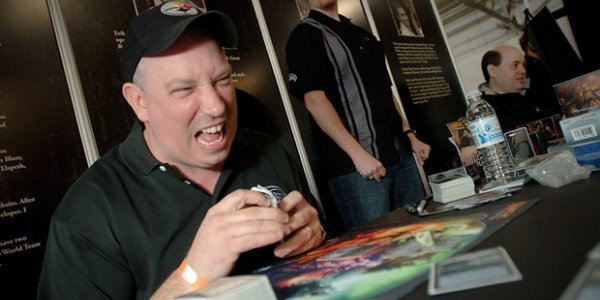 We took a moment at PAX AUS to throw down on a bean bag in the tabletop area and have a word with Wizards of the Coast’s Aaron Forsythe (getting into a game, above). Starting off as a professional Magic player, Aaron has steadily moved through the ranks at Wizards, now serving as Senior Director of R&D.

In our chat, Forsythe talked about how he got into the industry, how the digital Magic 2014 is helping bring new players into the fold… and (thankfully) imparted a little bit of Magic wisdom for us n00bs out there.

Steve Wright, Stevivor: Your bio makes for interesting reading. Mind taking me through your journey from professional player to game designer to head of R&D?

Aaron Forsythe: Well, I fell in love with Magic the moment I first played it, back in 1994. It just kind of hit me as the next big thing in gaming. I was a big time Dungeons & Dragons player at that point, but I kind of quit D&D the moment I picked up Magic. I played it with friends in my apartment, and then with my college buddies, and then realised there was a professional tournament scene and got into that. A local guy ended up winning a pro tour – his name was Randy Buehler – and after seeing that, I thought, ‘well, I’m going to go play on the pro tour too.’

Then, Randy got a job at Wizards first, and I thought I’d try to do that as well. I didn’t really pursue it directly, but I carried myself in a way that got noticed by the company. I wrote a lot about Magic on the internet, and I was doing well in a lot of tournaments. You know, I was just doing my part to prop up the community and be a positive influence on the game and brand. And, lo and behold, when they went to start their content website, in 2001, Mark Rosewater — who’s the head designer on the game — called me up and said, ‘love your stuff; we’re wondering if you wouldn’t mind considering applying for this job.’

So, my plan worked. My wife and I jumped at the chance; we moved from Pittsburgh to Seattle with no regrets. So, I worked at Wizards as the Content Manager for their website for two years, but I would hang out in R&D in my spare time and playtest cards for them. Eventually, they said they had an opening and asked if I’d like to work in R&D. I said yes, and from there, I’ve been quietly moving up the ladder ever since. Now, I run the joint. Sometimes, I pinch myself; it’s a strange series of coincidences, lucky breaks and a little bit of hard work, and now I’m in charge of all the guys who make Magic cards.

Stevivor: So before you went pro, would an event like PAX AUS have appealed to you?

Forsythe: Oh, yes. My brother and I played D&D for years and years; we played all kinds of fantasy games and whatnot. PAX still would have appealed to be back then; it’d be a thing I’d have enjoyed. I feel like I’ve been destined for this. [Laughs]

Stevivor: What fills most of your hours in R&D?

Forsythe: We’re currently working on sets that will come out in the spring of 2014, and for the next two years after that. We’ve always have five or six sets in the pipeline. We design cards by basically starting to type what comes to mind. We take the ideas and playtest them. We share them around the company. We give them to external teams to get feedback and see what sticks and what needs to change. We send them to our creative teams to make the pretty pictures. Basically, we’ve got this all down to a science after twenty years of making cards.

Stevivor: And how much feedback comes from the fans?

Forsythe: A lot. I try not to put too much weight on anecdotes, but it’s always great to get the pulse of the community, especially at a place like PAX AUS. It’s great what the Australian team are doing; they have a survey card going. What’s in front of us now are tables full of people playing the game for the first time. Our guys are teaching them how to play, and then asking, ‘how was this? What did you enjoy about it?’ I’m looking forward to reading the feedback on that. It’s going to be very meaningful data for us, and I look forward to seeing how we can apply it to the play in which we build entry-level products.

Stevivor: I’ve never really gotten into tabletop games. I actually tried at PAX 11, but for every dozen helpful players, there was the one troll who just couldn’t deal with a n00b. How do you suggest players shake that feeling of intimidation and jump into Magic? Do you have any strategies at Wizards of the Coast for this?

Forsythe: Our digital experience is a big way to combat that, as is the way in which we give out sample decks at events like PAX. We anticipate there being a bunch of people who don’t know how to play, or who’ve played eight years ago and don’t’ remember everything. If we just give out cards and say, ‘take it at your own pace; we’ve got people to teach you,’ it works.

Our digital game, Duels of the Planeswalkers, has probably been our best tool to acquire new players and reacquire lapsed out players. It teaches you the rules and what the cards do in a very low-pressure way, as opposed to being at a store where a guy’s like, ‘that’s not how you block, you dumb noob!’ You wouldn’t want to play anymore that way.

This way, you can play as you like; you can lose and then the computer will show you what to do, and you can go and fix your deck if you’re going about it wrong. I think that’s something that Magic lacked in its first decade; the [digital] game is like a friendly robot that will teach you the ins and outs of Magic. It would be intimidating otherwise, and it is anywhere where you have a subculture full of deep, obsessed, knowledgeable people. It can be tough to break into, and we want to make sure that’s not what’s stopping us from growing.

Forsythe: It’s mostly a tutorial. It looks great and has a lot of polish to it, though. The newest game, which has just come out – Magic 2014 — has a sealed deck mode where you have to build a new deck on the fly using cards you’ve just opened, which is something that our enfranchised players have been asking for a lot. That mode will appeal to them greatly.

In many regards though, even if you’re a long-time player, it’s just fun to beat up on the computer. [Laughs] You don’t have to feel bad kicking the crap out of it, over and over again.

Plus, we’ve also got a version of Magic called Magic Online on PC, which is a full version of the game on PC. It’s got all of the cards, all of the sets and all of the rules for a ten-year veteran who wants to go deep. That’s for the guy who wants to find a game at midnight in his underwear. [Laughs]

Stevivor: After this interview, I’m going to go and learn how to play Magic myself. Ahead of that, do you have any strategies I can whip out and use?

Forsythe: The key one that I teach new players is, you’ve twenty life points and it’s okay to lose some of them. You don’t need to win 20-0. It’s a resource; people will often start blocking and losing creatures at the beginning of the game to not take damage, when it’s okay do to that at the start and build up your army instead. That way, you can overwhelm people later. People get too defensive about taking any damage at all, and it’s okay – you can win with one point left. It’s totally fine.

Stevivor:  You get interviewed about Magic all of the time, but surely journalists miss something. What don’t you get to talk about that you want to give some of the limelight to now?

Forsythe: We focus a lot on gameplay, but not on our world-building and our illustration. I think we’re the premier fantasy illustration employer in the business. The sheer amount of material that we do yearly is mind-blowing, and it’s all top notch; our directors go out and find the best. Even if you don’t play, just opening  a deck of cards and looking at them is an amazing experience. You can see the effort and passion we put into making the game as good as we can. We’re twenty years in, and we’re at PAX AUS kicking it with the big boys.

We’d like to thank Aaron Forsythe and Wizards of the Coast for their time, and to One to Another for organising the interview.