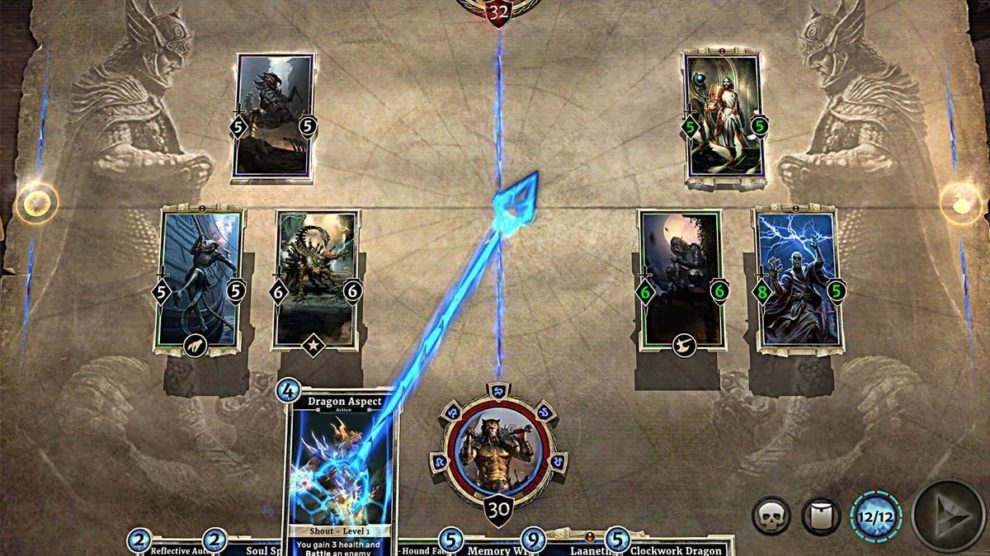 The Elder Scrolls: Legends has some interesting mechanics, but one of the things that really makes this digital game stand out is the battlefield is divided up into two lanes. The left lane is called the Field Lane, a space where creatures can fight each other without restrictions. The right lane is called the Shadow Lane; in it, any creature that is summoned here gains cover, which protects it from attack until that player’s next turn. Stevivor spoke to Pete Hines, Senior Vice President of Bethesda, about lane mechanics and if the publisher feels it’s what helps set Legends apart from other card games.

“Massively. People just have no concept of how important it is until you play the game,” Hines told Stevivor.

“Honestly. They are like, ‘Ah, whatever it’s divided.’ You don’t understand how big a game changer it is when you are deciding to play things either left or right. That those basic lanes have different rules, that this one over here has cover but this other one doesn’t – and all of the strategies that go into those decisions.”

“If you watch the Master Series, you’ll see how important it is in executing a game plan and stopping your opponent from what they are trying to do. There are certain cards that will affect all creatures in a lane, you can’t just keep stacking your resources in one place. If your opponent plays a massive creature on one side that you cannot deal with you don’t have to just throw your creatures in front of it and go, ‘Well these are all going to die.’ You can start deploying your threats in another lane and wait until you draw something that allows you to deal with that creature. Lanes and the rune mechanic are the two things that make a huge difference in terms of how people play the game, the strategy, and the depth that you can get into as you learn it.”

While on the topic of lanes we asked Hines about Valve’s new Dota 2 card game called Artifact, and if they are worried about them trying to one up them; literally – by having 3 lanes.

“I’ve seen a little bit on it, and when I saw it I was like, ‘Oh yeah that’s not really like what we are doing.’ It feels almost more like a card battler,” Hines said.

“That’s the thing, people will say, ‘Oh it’s a strategy card game.’ No that is like saying it’s a board game. Candyland is a board game, and so is Lord of the Rings, you don’t just throw everything into one basket. There’s deck building strategy cards games, there are card battler games, there is stuff like Magic: The Gathering, there is a whole spectrum of complexity, mechanics, and so forth. Because you have cards doesn’t really tell you all that much about what that game is until you understand more about what it is trying to do and how it works functionally.”

Luke Lawrie traveled to Dallas, U.S.A as a guest of Bethesda for QuakeCon.