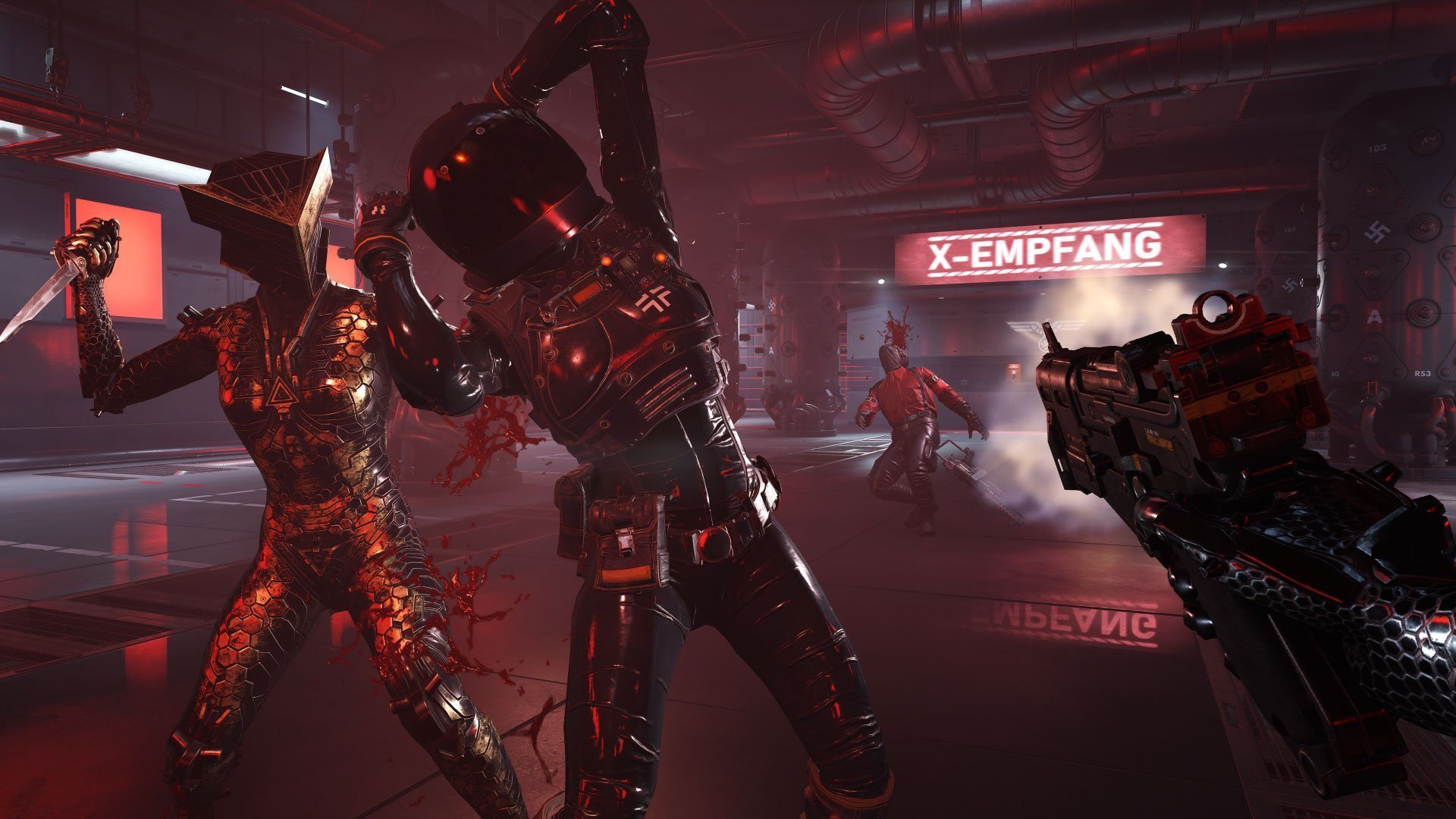 Relax -- it's been thought about.

Stevivor continued its chat with MachineGames’ Jerk Gustafsson to chat about AI co-op partners, game difficulty and more inside the upcoming Wolfenstein Youngblood.

Steve Wright, Stevivor: I think of co-op play with an AI character and immediately think of Resident Evil 5. I love Sheeva, but as an AI partner, she was dumb as a post. She wouldn’t really do a lot to help out and would run and get stuck on walls. Obviously that was a long time ago, compared to 2019. But, with that in mind, what has MachineGames done to try to make your AI co-op partner as realistic and as useful as possible?

Jerk Gustafsson, MachineGames: It is a challenge. It is probably one of the trickiest things to do. And it provided a lot of new challenges for us as well. But our — at least my — ambition from the get-go was to mirror the experience, of course, as much as possible. So, our ambitions from the start was that, whatever your companion player can do, the AI can do as well.

There are, of course, limitations to that since you obviously don’t have the benefit of the talking together and deciding on specific tactics together, right? But there are a lot of things we do; a good example is something we call the pep signals, that’s something that we use a lot in combat with a co-op partner. Basically it’s an inspirational emote that give you and your sister a buff.

Other things are, of course, the banter system we have between the sisters. Because an important thing for us is to be able to create that relationship between the two sisters throughout the experience, and that is of course something that we have focused a lot on regardless of if you’re playing co-op. In addition we’ve scaled down [the difficulty] a little bit when you play solo, because it is a bit more difficult when you don’t have that possibility of communicating strategic decisions.

Stevivor: That going to be my next question. I really struggle with Wolfenstein on the highest difficulty on my own; if I had to do it with an AI partner, I don’t know if it would work.

Gustafsson: But we also have some benefits actually, there are some things that you can do in solo gameplay that you cannot do in co-op. I think that is the fun of the game, as well. As an example, you can of course have some control of the AI companion in terms of what skin they wear, or what pep signal they use. You can assign those to your companion, as well. So you can actually have some control over what your AI companion does, which I think is a fun thing. That’s a good thing.

Stevivor: Is the kind of AI set up similar to other aspects of the game? Where if something doesn’t feel quite balanced at launch or something you can go in and tweak it with an update, in a similar fashion to general difficulty or like a bug, as an example? Or is it a little bit different?

Gustafsson: Yeah, it is different but it’s different on the plus side. And that is one of the things that we have tried to focus more on in this game. We have done a lot of this previously as well, but it’s different now when we have the benefit of being online, especially when it comes to the co-op as well. It’s easier for us to gather more data and more telemetry. We can also update, especially when it comes to balancing. We can do those types of tweaks fairly easily. So we will definitely be able to adjust, if needed. And, with that said, as you most likely know, we had some difficulties or some challenges especially with The New Colossus, where we had some bad spikes that took some time for us to adjust. We have integration now where we can do it more easily.

We have also focused in on the difficulty side. We do bump it up a little bit when you play co-op, but we also have this great opportunity with the sister, so even if you play co-op but with a friend, you can still individually play on different difficulty settings. So if you play with your partner as an example, and one is more proficient than the other, one can play on hard and one can play on easy, and that works.

Stevivor: That’s all really cool. And I guess, obviously, the buddy pass is almost a pain reliever for the scenario that I presented to you before: if I don’t have friends that don’t want to play I can likely convince them with free access to your game.

Gustafsson: I think that’s a great thing that we could do. You have to buy the Deluxe version to get the buddy pass, but it’s $40 [USD]; it’s a great value because this game is big.

I would encourage as many as possible to buy the deluxe version with the buddy pass, because it’s great value for money. It is, even though I really like to play all to myself as well, it is also great fun to play Wolfenstein with a friend.

Stevivor: Yeah. Well, and really, this has been designed for two people, not you and a computer.

Gustafsson: Yeah, well, it is. It is been programmed to be a cooperative. But considering our history and also where we want to be in the future, even though we have got a taste for this online and we love to play co-op, we also want to continue to support cooperative gameplay in a future title. We will also make sure that whatever games we do in the future, you will be able to play them solo, because that is very important to us as a studio.

Wolfenstein: Youngblood heads to Windows PC, Xbox One, PS4 and Switch on 26 July. We previewed the game recently at E3 2019. For more from our chat with Gustafsson, head here.