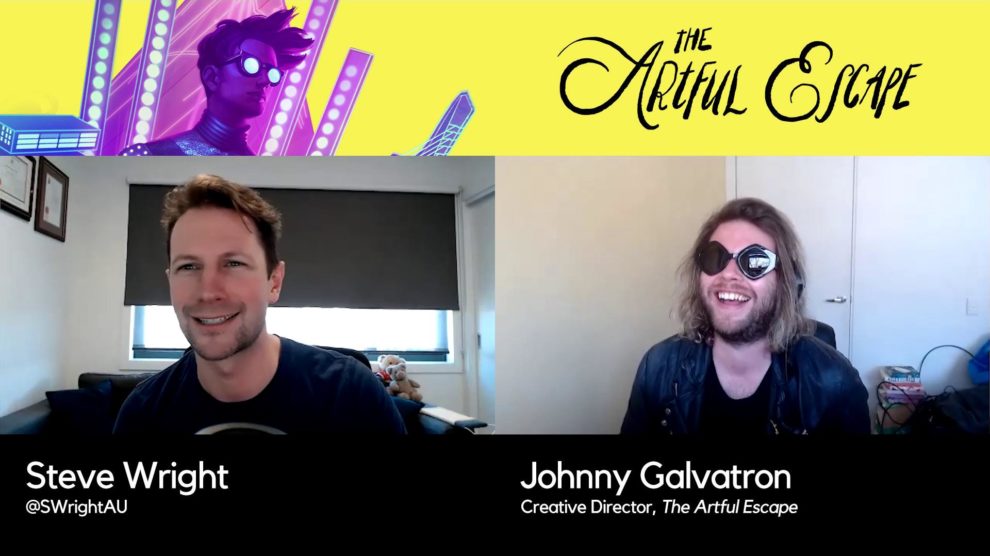 This (spoiler-free chat) is a good'un.

Stevivor jumped at the chance to talk all things The Artful Escape with Melbourne’s own Johnny Galavatron, its creative director.

In lockdown and over Zoom, he and Steve Wright had a 45-minute spoiler-free chat about the game; this will be followed up next week (after release) with another 15-minute spoilerific bit as to not ruin anything for potential players.

We repeat: despite saying there would be a spoilery chat at the end of the recording, it’s been cut out entirely, so don’t worry!

Johnny took the time to chat about The Artful Escape‘s conception, his own past in the Australian music industry, how his studio Beethoven & Dinosaur is doing in the pandemic, a little teeny bit of Star Trek, Xbox Game Pass, Achievments, a soundtrack and so much more. It’s a delightfully fun chat and worth a watch (we so humbly submit).

If you’re more of the listening type, this interview will also be added to a Friendly Fire Show podcast episode dropping later this week.

Many, many thanks to Johnny for his time, and for providing a ton of charisma, optimism and fun at a time when it’s sorely needed.

The Artful Escape heads to Windows PC and Xbox on 9 September, and we’ve been lucky enough to play through it in its entirety already. Our review is yet to come, but you can read our preview right this second.