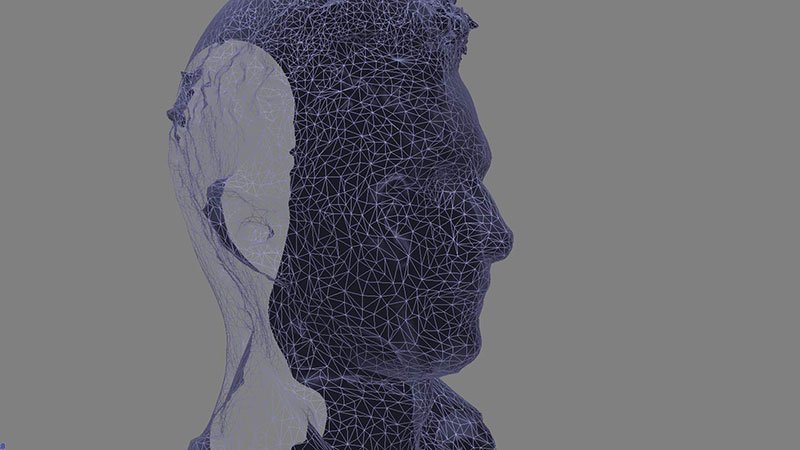 I sat down in the humble office chair positioned in the centre of the room in a state of panic. As I felt my right eyebrow begin to fire off an involuntary twitch as a result of my anxiety, my bottom lip quickly began to quiver in response. I scolded myself, mentally urging myself to calm down and take deep breaths but, more importantly, to stay still.

That’s when a voice called out from beyond the wall of bright light that was blinding me.

“Try to stay still,” the disembodied voice suggested. “This won’t take too long.”

I knew that, I wanted to respond back – but quickly realised that would count as movement. Putting every fibre of my being into stopping my nervous ticks, I made a small nod of my head in acknowledgement and did my best to then remain motionless. It was time to have my head 3D scanned so I could be added to AO Tennis as a ridiculously low-ranked player.

I must have looked like an idiot sitting there, visibly quivering and holding a reflector at chest-level to bounce the product of four strong studio lights against the bottom of my abnormally large Adam’s apple.

“Okay,” the voice called out. “I’m just going to focus the cameras now.”

If the mere thought of eighteen SLRs all pointed at me was enough to make me nervous, hearing each one of them whirr and re-focus themselves nearly had me at my tipping point. The cameras were positioned in a 300-degree arc around me, three to a pole and all pointing towards the chair I was sitting upon. The distinct, independent noise of each camera focusing its lens sounded like a cross between a swarm of insects and something from a science-fiction movie; for a split-second, I mused that I’d been abducted by aliens and this was the first step leading towards some eventual, horrific probing attempt.

“Alright, here we go,” my minder – thankfully, not and alien and even better, without any intent to probe (beyond the photographs themselves, that is) – said.

I stiffened up, internally cringing as if expecting to be hit in the face. A loud series of clicks rang out through Big Ant’s office as each camera took a photo. In my mind’s eye, I equated the photos as participants doing the Mexican Wave at the MCG, rolling through a gigantic oval in choreographed succession.

“Hmmm,” the voice said, with what I registered as dismay. “Let’s take another one.”

I tried not to frown as I braced myself for a second go. It wasn’t any less terrifying.

“That’s it, you’re done,” my minder said. I shot out of the chair, relatively happy that I’d gone through with the process, but horrified at the prospect of its result.

All up, my little stint of 3D scanning took less than a minute, but felt like an entire day or two. That figure – two days – is how long it takes Big Ant to properly scan a player for inclusion into AO Tennis, CEO Ross Symons told me. My mug would be placed on an already-scanned body, removing the need to strap on any motion capture equipment.

Symons continued to explain how each of AO Tennis’ superstars were captured for their inclusion in-game. Big names like Rafa are scanned at Melbourne Park itself after the Australian Open has concluded, while other Aussies like the famous Rod Laver make the trip into Big Ant itself to go through the process. While the 3D face modelling is eerily accurate, mapping the dimensions of your head and then grafting its assortment of photos across that, hair has to be manually crafted by Big Ant’s developers. Taking a look at Rafa’s in-game model and then the raw data from my own scan, I requested that my ever-so-thinning hairline was given the same generous treatment. Same too for my red-tinged, rosacea-laden cheeks.

I also feel the need to point out that I was told the double-chin look is a result of the camera placement and would be corrected in post as well. Given control of the mouse, I was able to re-arrange my own model as I saw fit… and felt very uncomfortable as I turned around to where the cameras didn’t reach, staring into a gaping hole where the back of my head should be, greeted by a mirrored view of my face through it all.

That sight was enough to tear my own vain-ass self away from scans. I decided instead to launch into a barrage of scanning and mocap questions. Surprisingly, Symons confessed that Big Ant didn’t record a single player smashing a racquet in frustration; he and Big Ant assumed that Tennis Australia simply wouldn’t allow it. Hysterically, it was later learned our national tennis organisation didn’t have a problem with it, so said animations will be recorded at a later date; they may be included in this year’s iteration of the game or hopefully — if Symons gets his way — in the next iteration of the franchise.

As terrifying as the scanning and motion capture proved to be to me, Symons said each tennis star scanned took it with ease, and that everyone – bar one Aussie, who he wouldn’t name (but we can probably all assume) lived up to his or her reputation. I’d imagine that, like me, the idea of having an accurate digital representation in an honest-to-goodness video game made cooperation a no-brainer. It could also be that the big wigs were also getting paid tons thanks to licensing agreements, but I digress.

The raw data out of the way, I’ll have to wait and see how I turn out in the game proper – rest assured we’ll be updating this with results so you can judge accordingly.

AO Tennis heads to Xbox One and PS4 here in Australia and New Zealand on 16 January 2018. A worldwide release is planned, including a PC release, in March 2018.

Update: Here’s the finished product (and I’ll update this post with more assets as they arrive):

Update 2: Big Ant has provided two on-court shots. I look like I can tennis!