Forget Banjo-Kazooie: Nuts and Bolts — Yooka-Laylee is the third game in the Banjo-Kazooie series. Just, you know, with Yooka and Laylee instead.

As we detailed in our preview, developer Playtonic, comprised of a number of former Rare staffers, has finally fulfilled the promise of the Banjo-Threeie tech demo. Yooka-Laylee is a trip down memory lane; one bursting at the seams with nostalgia yet proudly displaying polish and refinement worthy of today’s blockbusters. By the time you’ve gone through the opening tutorial, any pangs of sorrow experienced over the loss of Banjo and Kazooie are long gone — Yooka and Laylee are more than capable replacements, each filling the role they’re meant to with ease. The same goes for collectibles, and general level layout — while nothing goes by the same name, most elements are near-perfect carbon copies of the original.

You might baulk at that statement, instead demanding evolution and new mechanics. You shouldn’t — that’s Nuts and Bolts in a (and I’m sorry, I can’t resist) nutshell. Gone are uninspired, LEGO-like building systems; Playtonic instead relies upon proven mechanics that have the same impact in 2017 as they did in 1998. The opening hub world, Hivory Towers can’t help but remind us older folk of Grunty’s Lair. Capital B and Dr. Quack prove to be nefarious villains. Composers behind the original Banjo-Kazooie and Donkey Kong Country return to give us new tracks that let waves of Nintendo 64 wash over you. Quills and Pagies replace Jiggies and Music Notes, but you’re going to want to hunt them down just as badly. 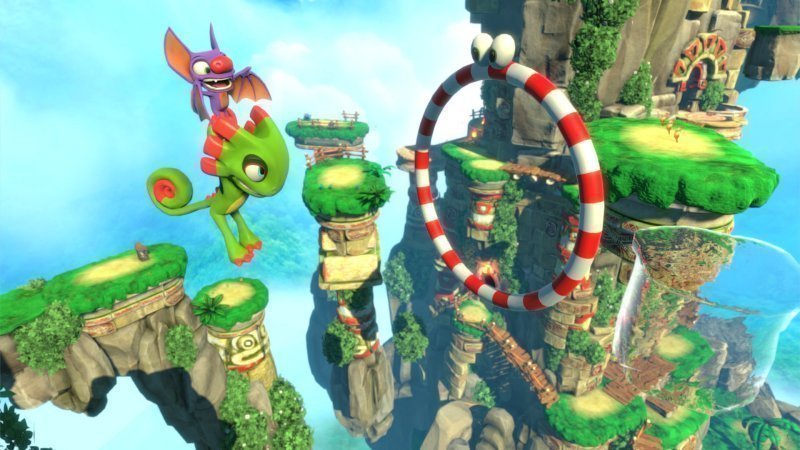 And return them to Trowzer the snake for more powers, of course. So naughty.

Getting a younger gamer to play Banjo-Kazooie now — even the version offered on the Xbox One’s Rare Replay — is a hard ask. Camera controls alone make it difficult to get a true sense of Rare’s original vision. The in-game character of Rextro Sixtyfourus is a perfect mirror for this — polygonal and blocky, he wants nothing more than for you to play with older games. You needn’t have to. Yooka-Laylee takes all the wonderful things about a much-loved franchise and brings them to the current day. These types of hurdles are now discarded, making it easy for a modern gamer to appreciate the core gameplay loop. Kids who may feel things are a bit Mickey Mouse will begin to appreciate the skills actually required to collect some of the hard to reach Pagies. They’ll wrack their brains trying to figure out how to transform into a different shape to interact with stubborn NPCs. They’ll strive to discover how to win a seemingly unwinnable race, or find hidden Ghost Writers.

In short, kids of any age will lap this stuff up… with the possible exception of voiceovers that, Zelda-style, could benefit from understandable speech rather than squawks. 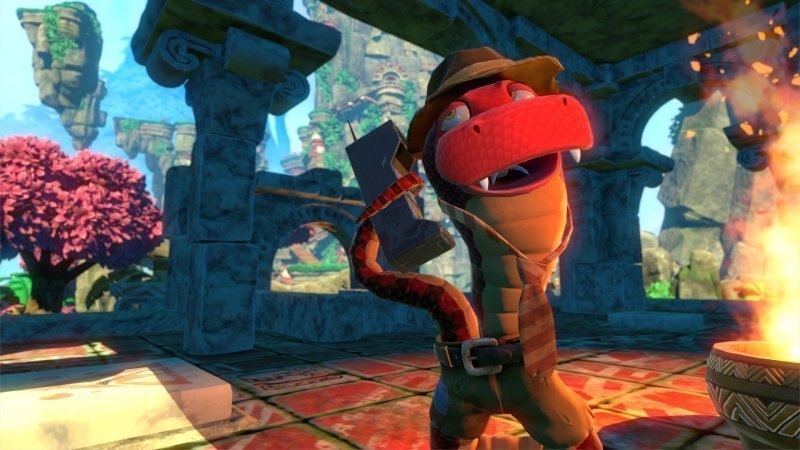 A variety of worlds — alongside a special guest star or two — help to keep things interesting. Upon discovery of Pagies, players can either elect to expand a world or delve into something new. From tropical locales to frozen wastelands and everything in between, each world is large (but not too large) in even its first incarnation, teeming with interesting stuff to do and explore. Playtonic’s special brand of humour is weaved throughout, seemingly innocent but with a sly wink towards those old enough to appreciate subtleties.

While most of the Banjo-Kazooie core loop translates well into a modern game, I did have trouble controlling some of Yooka and Laylee‘s transformations — something echoed by Will in our preview — and occasionally, the camera couldn’t keep up with me during some tricky platforming sequence. Otherwise, things are exceedingly enjoyable.

Yooka-Laylee is Banjo-Threeie, and that’s perfect — it’s exactly the game fans on Kickstarter wanted it to be. It’s also the game younger players never knew they wanted.

Yooka-Laylee was reviewed using a promotional code on Xbox One, as provided by the publisher. Click here to learn more about Stevivor’s scoring scale.