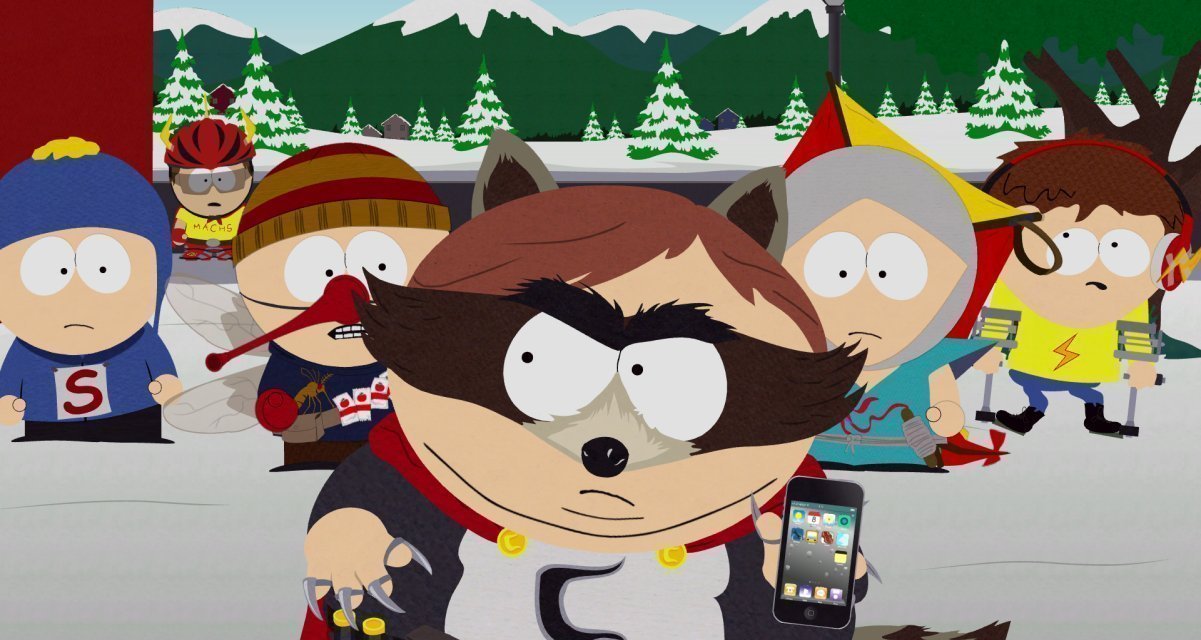 Saving the world, one selfie at a time.

South Park: The Stick of Truth was an unknown quantity, a title that began life at THQ and moved over to Ubisoft after its collapse. Following a string of phoned-in tie-in titles and delayed suffering from several delays, it managed to shake that all off, easily (yet surprisingly) solidifying itself as one of the best games of the year. It should be no surprise, then, that South Park: The Fractured But Whole is even better.

Taking place directly after the events of The Stick of Truth – and leveraging the TV show’s recent “Franchise Prequel” episode, The Fractured But Whole stars The New Kid (aka Douchebag) and the usual crew of South Park fourth graders, easily looking like an ultra-extended episode of the show itself. The kids have decided fantasy is for chumps – superheroes, and more specifically, superhero franchises, are the hot new thing. When Cartman pushes his plans for a connected universe too far, Coon & Friends splinters; Token forms The Freedom Pals in reply and the fourth graders find themselves amid utter chaos.

While The Stick of Truth took swipes at Facebook, The Fractured But Whole has its sights set squarely on Instagram. Coon & Friends’ overall plan is to use Netflix to launch the C.A.F. connected universe; to do that, they’ll need some serious cash. The New Kid is tasked to track down a missing cat and earn a $100 reward – exactly the amount the superheroes need. Saving the cat isn’t an easy task, of course – it involves The New Kid earning Coonstagram followers and playing vigilante with the baddest of the bad in South Park’s darkest corners.

At its heart, The Fractured But Whole is an many-layered RPG that looks simplified due to South Park’s general aesthetic. When you look deep down at systems, you’ll find complexity. You’ll start as a one-class superhero – like an Elementalist or Speedster — but you’ll also gain access to additional classes and their powers down the line. Combat, gaining followers and finishing questlines provides XP, which in turn will offer up Artifact spots in your hero’s DNA. Powered-up Artifacts will give you a higher Might score, which The Fractured But Whole uses to give you an idea of a questline’s difficulty.

Certain quests are locked behind a Metroid-style blocking system, unattainable without a certain skill. The New Kid’s extreme flatulence makes a return, this time surfacing as a set of powerful Timefart moves. One rewinds time while another pauses it – all four powers are necessary and vital to not only progress through the main storyline, but embark upon a varied set of side quests. The help of fellow superheroes is also extremely important; progression provides new Buddy Powers which help The New Kid get to areas he couldn’t alone.

Combat can also get quite complex, especially on the higher end of the three-tier difficulty system. You’ll have access to a team of four varied superheroes, each with different moves and attack patterns. As the Coon, Cartman is incredibly powerful, but he’ll only be able to use a certain devastating super attack right beside an opponent. My combo of Speedster-Cyborg-Elementalist as The New Kid made for extreme damage, but I was restricted to attacks ahead and behind me – anyone above or below could breathe easy.

There are several status effects that can be used for or against your team. As an expert farter, The New Kid can ambush baddies before an actual fight to gross them out. That’ll result in your opponents puking between turns. Characters can also become confused, swayed to the other side, and The New Kid’s TimeFart powers can also be used in combat. While each had its advantage, I found myself using the TimeFart primarily to rewind time and, thankfully, a particularly brutal opponent attack before it could happen. When an opponent manages to land a hit, the franchise’s quicktime combat reply system is still intact, letting your heroes charge an ultimate metre when taking damage. Each character has its own ultimate, and each is dramatically revealed like in Injustice. You’ll want to cycle through heroes and their ultimates just to see how it all plays out.

Combat is refreshed by the occasional special condition, requiring your heroes to complete an encounter in a certain manner. The best part about the encounters is that they’re deliciously funny; I wouldn’t even think to spoil any of them ahead of time.

While you’re able to manage your team of four freely for the most part, certain sequences will make you use one or two specific heroes. I found The Human Kite, Coon and Captain Diabetes to partner well with The New Kid, providing short- and long-range damage options alongside ample opportunities for healing. My damage patterns were largely horizontal, but by positioning heroes along each of the grid’s three rows, I more than dealt with opponents. Though his whole shtick was to be annoying, heroes like The Mosquito managed to do that to me rather than my foes.

While combat’s great, I enjoyed exploration far more. Solving environmental puzzles to get into closed-off parts of the town was at the top of my To Do list, as was tracking down each of the 41 Craig and Tweek yaoi drawings that have taken the place of Chinpokemon as in-game collectibles. Truly, each nook and cranny is filled with South Park lore, rewarding those franchise fans to wish to seek it out. You should be doing so, by the way.

On top of all this, The Fractured But Whole gives a dose of the South Park of old, a direct line into the minds of fourth graders and their world, surrounded by make-believe and plagued by the evil of sixth graders. After several seasons where Randy Marsh and P.C. Principal have been vital in satirising home improvement shows and microaggressions, having the kids and their (relative) innocence back at the forefront was truly delightful.

Just like The Stick of Truth, The Fractured But Whole is 100% South Park. This is a must for fans of the show, while those who enjoy a challenging RPG will delight in cranking up the difficulty and working through its many systems.

South Park: The Fractured But Whole was reviewed using a promotional code on Xbox One, as provided by the publisher. Click here to learn more about Stevivor’s scoring scale.