Home » Reviews » Scott Pilgrim vs The World The Game Review: We are Sex Bob-Omb! 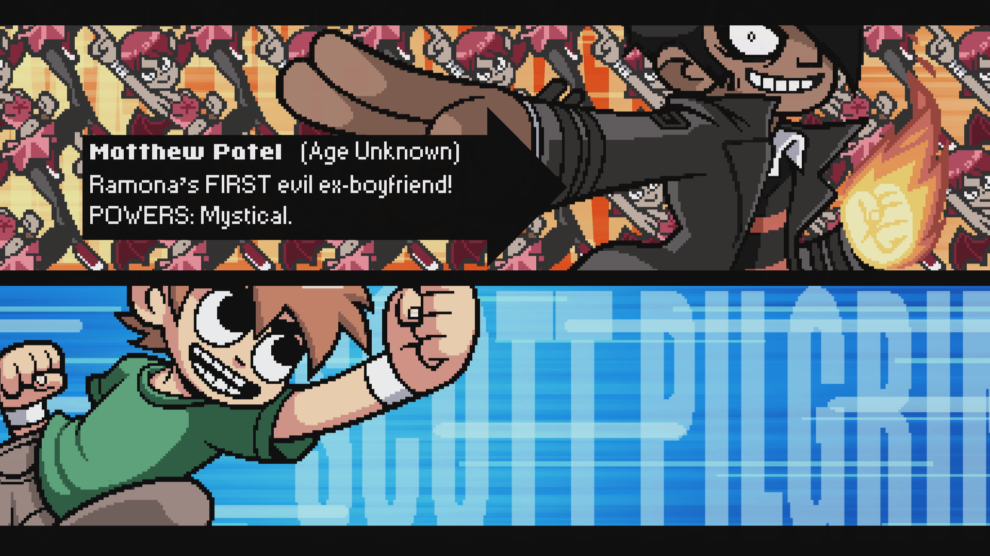 And we're here to make you think about death and get sad and stuff!

If you’re a fan of the game from its days on PS3 and Xbox 360, you’ll still be in love with it today.

If you’ve never played before, Scott Pilgrim is a love letter both to the graphic novels and feature film of which it’s based, in addition to retro side-scrolling video game beat ’em ups themselves. Playing solo or in a team of up to four characters, players will take control of Scott, Ramona, Stills, Kim, Wallace and Knives to defend Scott’s honour, impress Ramona and ultimately battle each of Ramona’s Evil Exes. Needless to say, the experience is better if you’re already familiar with Scott Pilgrim.

That said, you don’t need that knowledge of this this incredible piece of Canadian culture if you’re a fan of side-scrolling beat ’em ups. Starting off as a level 1 character, you’ll move through seven distinct worlds — each with multiple levels — on a quest to take down bosses. You’re underpowered and outnumbered (even with four players!), but never fear: you can better yourself. Felling enemies will result in them dropping money — not just money, but good ol’ Canadian coins — and that cash can be used to buy temporarily health or, better yet, permanent boosts to your character’s speed, defense and so on. With each new level your character reaches, another new move becomes available to you.

The resulting gameplay loop is incredibly enjoyable, throughly difficult and encouraging a grind (but in a fun way, not an Avengers way). Also? If you can’t be bothered, a host of cheat codes will do away with some of that difficulty and let you wail away with ease. In offline or online multiplayer, the loop adds another layer with shared loot; you might be on the same side when it comes to taking down Matthew Patel, but that quickly changes when you’re all racing for the $2.50 he drops.

The title features exceptional pixel art with dozens of clever easter eggs, special modes like a survival horror experience and dodgeball, and even rounds things out with a frankly spectacular chiptunes soundtrack composed by Anamanaguchi. It hasn’t aged a single day since its first release back in 2010, though it does suffer because of a gap in new Scott Pilgrim content since 2014 and 2021.

Scott Pilgrim vs The World The Game Complete Edition is perfect for fans of the original game, the Scott Pilgrim franchise itself or fans of beat ’em ups. It’s available on Windows PC, Xbox One, Xbox Series S & X, PS4, PS5 and Switch from 14 January. Priced at $22.95 AUD, you can’t go wrong.

Scott Pilgrim vs The World The Game Complete Edition was reviewed using a promotional code on Xbox Series X, as provided by the publisher. Click here to learn more about Stevivor’s scoring scale.