As a racing enthusiast, I feel the genre never quite receives the attention it deserves in the gaming community. Sure, we have franchises like Need For Speed and Forza Motorsport, which everyone know about, but I get the impression that for most, their idea of ‘racing’ involves little more than driving around in circles and crashing into walls. Another thing is that unless the game is part of a massive franchise (like the two mentioned above) or features overly-unrealistic physics, it seems to be ignored by the masses. Recently, I’ve been playing SBK Generations, the latest game from Italian developers Milestone Inc. It’s one of the best racing titles you’ve never heard of.

When it comes to Milestone, I’ve often felt that what their games lack in polish and presentation, they make up for in gameplay. This was evident with WRC2, which was without a doubt the worst looking racer I’ve ever played, but by far the most rewarding rally title I’ve come across since Colin McRae DiRT. With SBK Generations though, things are a little different. Starting in 1999 with Superbike World Championship, the SBK franchise is the pride and joy of Milestone and it shows with their latest offering. Sure, it’s not the best looking racer I’ve played, but it is hands-down the best motorbike racer I’ve come across since MotoGP 08…coincidentally, made by the very same developers! 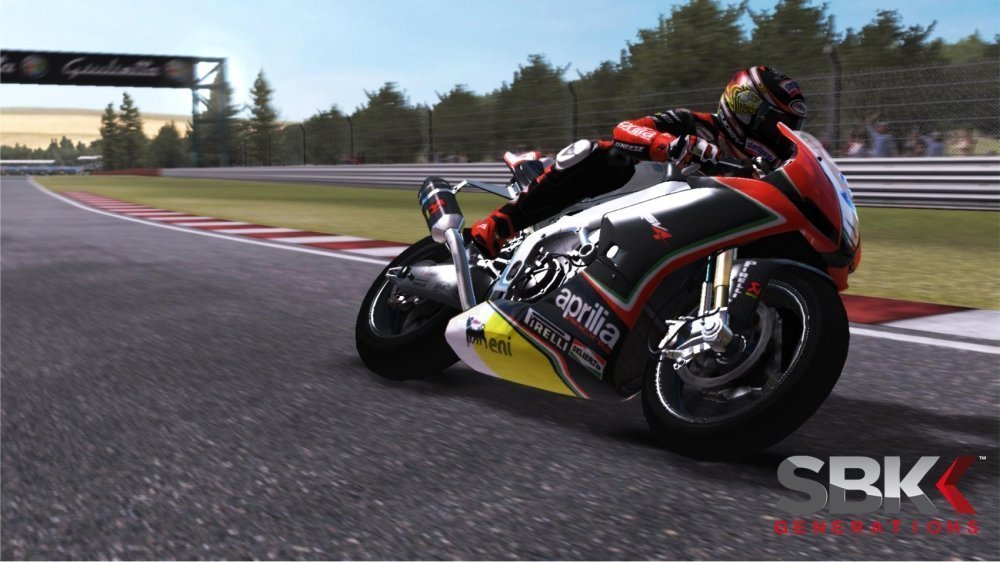 To start with the basics, SBK Generations covers the last four years of riders and teams (from 2009 to 2012) across the multiple tiers of the FIM World Championship – from Superbike to Supersport to Superstock. The game features pretty much the same modes we’ve come to expect with almost ever racing game on the market. You’ve got your quick race mode (which covers time trial and championship races), online, career and something which was introduced in the last SBK title known as “SBK Experience.” Essentially what the latter entails is a series of challenges which span across the different riders and teams. Challenges can include finishing a lap within a certain time period, performing a certain amount of wheelies or even completing a lap without deviating too far from the racing line. While each challenge unlocks a new rider it’s all fairly boring and does little to introduce or immerse the player in the world of SBK or more importantly, how to race with motorbikes (a real problem I’ll cover later on). The career mode follows a similar suit to games like F1 2012 and MotoGP 2010 or 2011 where you create a rider and select a team to race for. Unlike MotoGP, you don’t need to earn sponsors, fiddle around with team staff or focus on things like reputation and style. Yes, you earn reputation at the end of each race but it means absolutely nothing and isn’t nearly as in-your-face as it has been with the last two MotoGP titles.

What makes each Milestone title great is its gameplay and this certainly shows in SBK Generations. If you’re someone who loves speed and that excitement you get from pushing a vehicle to its limits, this delivers and some. I recently completed a race in Valencia and there’s little more exhilarating that pushing the bike to the point that the rear tire is shaking and you can sense that your rider is on the verge of being thrown off. Another thing I really appreciate is that, unlike most racers out there, you don’t have to start off with an underpowered bike and have to endure hours of mindless racing with lawn-mower powered vehicles until you can experience a decent feeling of acceleration and speed. While not all teams are available from the beginning, the fact you can start off with a SBK-tier team at the start of your career and still be competitive means you never feel like you’re wasting time (*cough* MotoGP 10/11 *cough*). 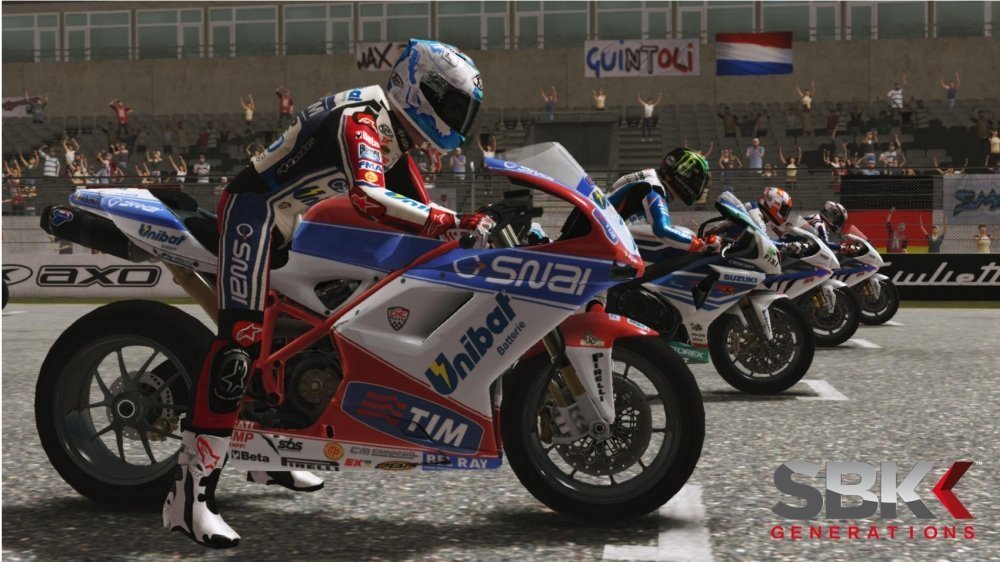 This all said though, the enjoyment of SBK Generations does come at a cost…or at least some frustration. The first and perhaps greatest problem I had with this game was the distinct lack of a tutorial. While racing as a whole generally has the same principles whether it be two wheels or four, the way in which you brake or turn into a corner changes from a car to a motorbike and SBK Generations does little in the way of explaining this. For the first two races I struggled to understand how to correctly use the front and rear brakes and even now I still just use both and hope for the best. A further challenge is added when you factor in tire wear, where despite trying to brake as little and softly as possible, I still struggled to get around the course by the last lap. The game mentions that full simulation is a challenge and they aren’t kidding. Full damage, simulation physics and tire wear – I’ve never worked so hard to win in a racing title before.

My other qualms with this game come from the lack of detail and seemingly stupid decisions made from the developers. For example, you can only ever change your simulation and race settings before a race weekend in career. This means that if you set the difficulty too high or would like to turn on some assists, unless you do it before you begin the weekend you’re stuck with them. I had to throw away the first two events of the season for this very reason – ridiculous when every other game lets you change them mid-race, and if not, from the main menu. The punishment/warning system is the game is also fairly tolerant where corner cutting often goes un-noticed or inconsistencies where the AI are able to ride on grass with no impact on their performance while the same actions by the player would almost see you thrown off instantly. The game also essentially forces players to select simulation physics from the get-go unless you’re keen on racing with the obtrusive racing line – an option which should be available to turn off/on irrespective of the difficulty. 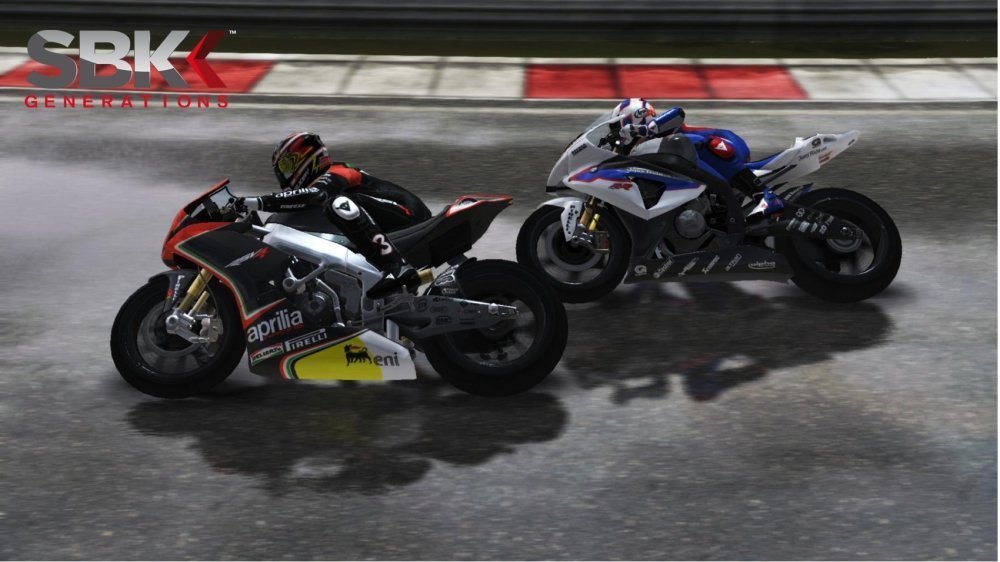 SBK Generations won’t be in contention for the best racing game of the year and nor is it the best-looking, but it’s definitely the greatest motorbike game on the market as far as I’m concerned and an overall solid racer at that. The game is not without its flaws but any issues I had were overcome once I started to understand bike mechanics a little better and found myself becoming more competitive. I’ve never crashed or fell off as much in other games as I have with this one, but the satisfaction you get when you qualify first and then go on to win the race is unbelievably rewarding. Generations features three physics settings to cater for all types of players but games like these never really appeal to the masses and unless you’re playing on full simulation, you’re wasting your time. SBK Generations may be a title that only racing and motorbike fans will enjoy, but this means the developers don’t ruin the game for an audience that doesn’t care (such as the last few DiRT titles). If you love speed and if you love racing, SBK Generations is a game you owe to yourself to check out. It might not look as good as Forza Motorsport 4 but believe me, it plays much better.