World of Final Fantasy is an adorable tribute to the beloved near thirty-year-old Final Fantasy series. Despite a lacklustre story and voice acting, I fell in love with its miniature world. Combat is fun and strategic, and the variety in monster and character designs is refreshing. Environment-based puzzles blend world and level design, serving a greater purpose than just visuals.

Unfortunately, its story is underwhelmingly cliché. Players take on the role of amnesia-struck siblings, Reynn and Lann, destined to save the world of Grymoire from the intimidating Federation army. Plot progression involves a basic point A to point B narrative structure, leaving little room for discovery. World of Final Fantasy’s selling point is that of iconic characters from the series often serving an integral role to the plot. The nostalgia of seeing characters interacting with others they often couldn’t, and re-enacting moments from the series’ long history, kept me engaged. This also emphasised how unoriginal the pair of protagonists were.

Reynn and Lann are poorly written, stereotypical teens. In fact, the first few hours of the game are plagued with a “dude” in every scene, and in a series with such likeable and iconic protagonists, the pair felt forced and meaningless. Interplay between the two is uninspired; even with better delivery, their dry humour and chemistry is cringeworthy. World of Final Fantasy suffers from a more noticeable level of questionable dialogue and sluggish pacing in scenes than Final Fantasy XIII. Again, there’s a charm to dialogue between Cloud and Squall that’s missing in scenes between original characters. I’m not sure whether that’s due to them being poorly written, or simply that the game bases itself too much on the player’s love for the series. 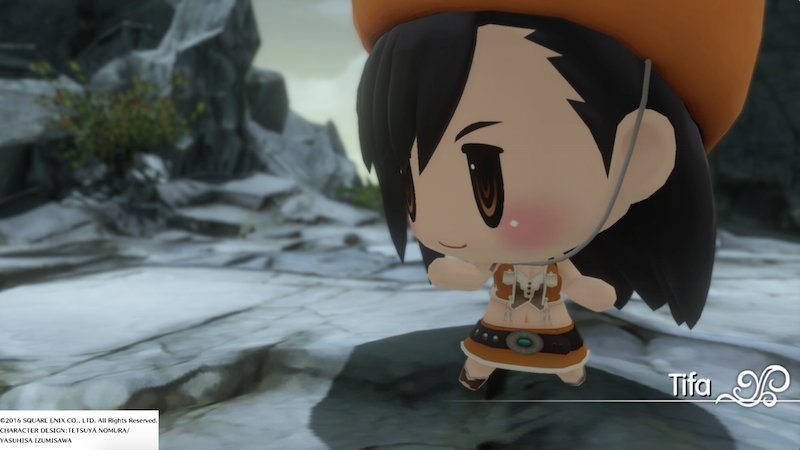 Unlike its story, combat is strategic and fun. In randomly selected battles, you initiate commands in a turn-based or active turn-based battle system, controlling both Reynn and Lann and Mirages, creatures trapped in the world. Mirages act as additional party members in battle or can be used to boost your human character’s stats using the stacking mechanic, which is World of Final Fantasy’s greatest feature. Stacking combines the characteristics of selected monsters with Reynn and Lann, giving the pair new abilities and improved stats, as well as their mirages’ weaknesses. Enemies can topple your stack leaving you temporarily knocked out but the same applies to your opponents as they can stack as well.

Stacking is at the game’s core, as I often felt encouraged to study the similarities between my Mirages and Keepers to gain new skills. Stacking a baby Ifrit with Lann who had equipped a fire spell, for instance, unlocked Fira; while stacking physical-attack based monsters with high defense and attack but low magic with Reynn, made her my designated tank. While this may sound quite convoluted, the game’s menus are easy to navigate, so organising your team is fairly simple. You can also summon heroes of past games for a Limit Break-style attack, although I didn’t find myself ever needing to use them. The game is well-paced, too, and you don’t need to grind much, if at all, to progress.

Character progression is extensive for mirages but disappointingly limited for Reynn and Lann. Your Mirages improve by advancing them on a grid-based board akin to Final Fantasy X’s Sphere Grid, learning new abilities, passive skills and stat bonuses; even later, they transform into stronger versions of their kind, much like Pokémon. Developing your Mirages makes for a more personal attachment to character progression, as I found myself grinding to better craft my unique band of bizarre creations and see them grow. Reyn and Lann only acquire abilities temporarily by equipping spell-specific and status boosting gemstones or stacking, which feels odd given they are the main characters. In this and many ways, like the dialogue, the pair feel restricted and tacked on when compared to their fleshed out monster counterparts. 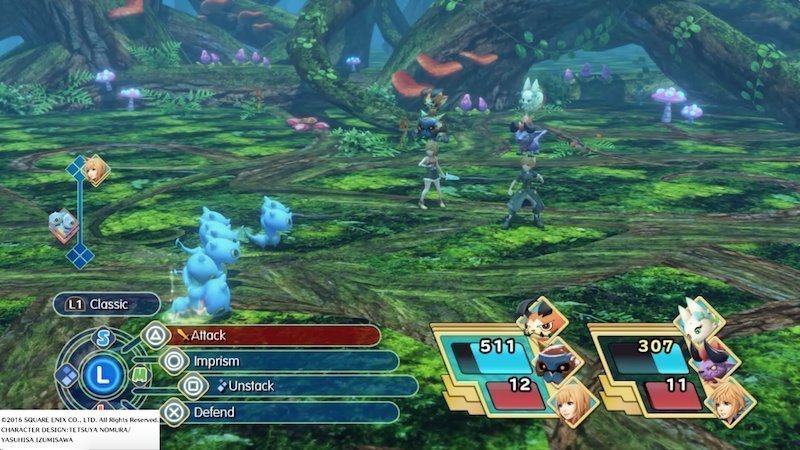 The world is varied with environment-based puzzles, too. Obstacles often block your path in dungeons, requiring you to use a Mirage’s skill to melt ice, ignite a cannon to traverse across the map and more, adding a fun variety to exploration. These interactive environments are unique to each area and mostly only needed to find secret rooms of chests and mini-bosses, so I didn’t find it too frustrating when at times, none of my equipped Mirages knew the skill required to advance.

Other puzzles involve you weighing your mirages and their resistance to a certain element, or are tied to the dungeon’s interior, such as using the glaciers in a snowy mountain terrain to skate through a room with an ice floor. Each area in the over thirty-hour narrative is colourful and dungeons are well-structured. World design also continues the game’s nostalgic theme by basing some of its towns on iconic locations from mainline games, albeit renaming them but keeping a majority of their details.

World of Final Fantasy is an enjoyable role-playing game. Final Fantasy fans will appreciate the level of detail and nostalgic cameos both in the narrative and monster designs, but newcomers of the series may be left overwhelmed. That said, the Pokémon-lite aspect of capturing mirages, and training and transforming them to more powerful beings, is addictive fun. While the dialogue is poorly written with often dry humour awkwardly delivered, you can’t help love the adorable chibi character animations. It may not be a good entry point to the series but World of Final Fanservice succeeds at celebrating a beloved franchise of nearly thirty years.

World of Final Fantasy was reviewed using a promotional copy on PS4, as provided by the publisher.