I didn’t think it would be possible, but Umbrella Corps has officially taken the title of “biggest Resident Evil cash-in” away from Operation: Raccoon City. Brief moments of online merriment don’t even come close to saving this muddy, jumpy, bot-filled mess.

Working with the flimsiest premise possible, its single-player campaign places you in the boots of an Umbrella mercenary. Two years after the events of Resident Evil 6 and twelve after the demise of Umbrella itself, your mission is to shoot zombies and other BOWs in the face in order to collect DNA samples. That’s about it. You do so in an over the shoulder, third-person view that greatly obstructs what you can see on-screen, switching to first-person should you wish to aim down your weapon’s sights. In your DNA-sourcing travels, you’ll visit a single new environment, followed by the likes of multiple reused locations from previous titles in the series.

Those familiar landscapes might have gotten the title by on nostalgia alone, but that notion is ultimately crushed by their poor quality. Textures are quite noticeably simple and barren, and that resident ugliness — pun intended — pulls you right out of the experience. That notion is only made worst because areas that franchise fans have come to know and love – like the Pueblo from the opening of Resident Evil 4 – have been modified to suit the mechanics of this new entry. 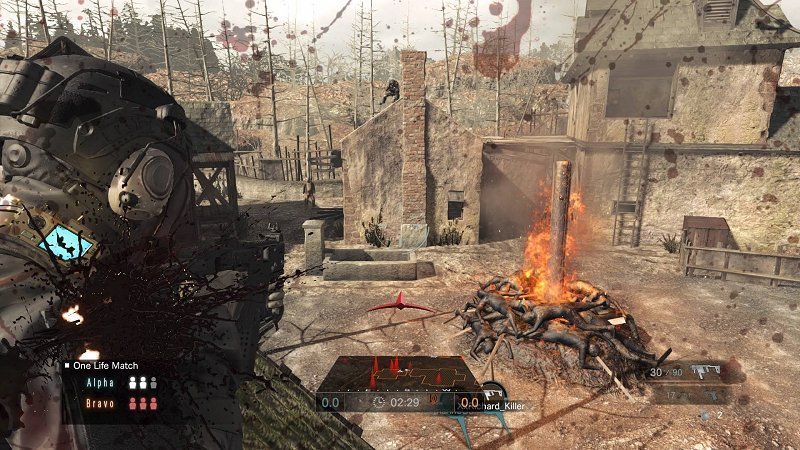 As you progress through the single-player campaign – if you can even justify calling it that – the new locales also offer up new challenges, like ‘stand in one spot for ten seconds’. All-too-familiar enemies are also introduced, like annoying as all hell mutant dogs. Said enemies either pop in from the start of the round, or – and never before seen in Resident Evil over its twenty years, I might add — birth themselves from piles of viscera strewn amongst the ground.

The objective of the single-player missions, ultimately, is to best yourself. As you obtain DNA samples, you’re constantly under the clock. Coupled with leaderboard support, it’s clear that Capcom intends for you to re-run missions, shaving precious seconds off your time. The problem is, Umbrella Corps does everything in its power to reward ineptitude. Headshots, a staple of the franchise, actually hinder your progress; hitting one means you’ll have to wait for a zombie to go through a three-second death animation before dropping its goods. Compare that to a near-instantaneous drop after two body shots, and the strategy you need to employ becomes clear.

Maps and objectives aside, The Experiment feels hollow and without direction. Enemies aren’t difficult to defeat – though they can be cheap if your back is turned to a pile of guts. Your character moves so quickly, it feels like you’re playing a Quake Arena match with utterly useless bots. And underpowered weaponry. And a framerate that never manages to be stable. All the while, having absolutely no fun whatsoever.

Online offerings are sparse, but more enjoyable. Two modes are currently on offer – One Life Match, and the ever-changing Multi Mission. Both are fairly self-explanatory – in One Life, it’s kill or be killed in teams of three. In Multi Mission, you’re tasked to fulfil whatever random mission objective you’re presented in that round. The latter mode is more fun, providing a chance to act as a support character and actually as a team, rather than just running around like a homicidal maniac. One Life is almost impossible, as mercenaries have hardly any health; if you get tagged by anything, you’re pretty much done.

Unfortunately, terrible net code ruins any chance the online mode has to succeed. AI enemies teleport around the map as if they were extras on Star Trek. Melee kills are just plain ol’ broken; you can either register a hit from across the map somehow, or end up flipping a coin to see who’ll come out on top if two members of opposing teams trigger melee animations around the same time as the other. Don’t even get me started as to why or how you come equipped with a climbing axe that shoots electricity.

Umbrella Corps is a half-baked zombie shooter that preys upon brand recognition to con you out of your hard-earned cash. Don’t fall for it. Capcom, rather than this drivel, can you focus on tightening your net code and delivering a fresh take on Resident Evil: Outbreak instead?

Umbrella Corps was reviewed using a promotional code on PS4, as provided by the publisher.