I sit on the Total War side of the church for this marriage made in heaven. I know little of the groom; I can’t tell you how well the lore of Warhammer is represented or how authentic this is as a Warhammer experience. My only experience with Warhammer is when I mistook Games Workshop for a video game store as a child, computers and consoles kept me from tabletop and figurines — though, whether this worked out better for my wallet is debatable. I do however know the bride very well. For nearly two decades we have been great pals, from her rough but innovative Shogun phase through some incredible times in Medieval Europe and Rome that I count among my favourites in gaming. I might not have enjoyed her return to Rome or obsession with Napoleon that much, and skipped her apparently entertaining Attila phase entirely, but we have shared many treasured memories over the last 16 years.

I don’t need to know much about Warhammer to know it is a shot in the arm to the Total War formula, a fantasy setting that allows an unprecedented variety in combat units and a focus on heroes (and heroics) impossible in a game chained to historic warfare and figures such as Napoleon or Attila the Hun, who despite their achievements were still just men tied to the laws of mortality. Dwarf kings and undead Vampire Counts do not have such restrictions and Total War is better for it.

Total War has lost none of her personality in this union. This is still a turn based strategy game with combat fought in real time, large scale battles. This is a Warhammer spiced Total War, not a complete reinvention of the formula. A touch simplified but not dumbed down; excessive bloat and complexity has been removed to the benefit of the package as a whole, and with the freedom of fantasy comes the best real time battles the series has ever produced. 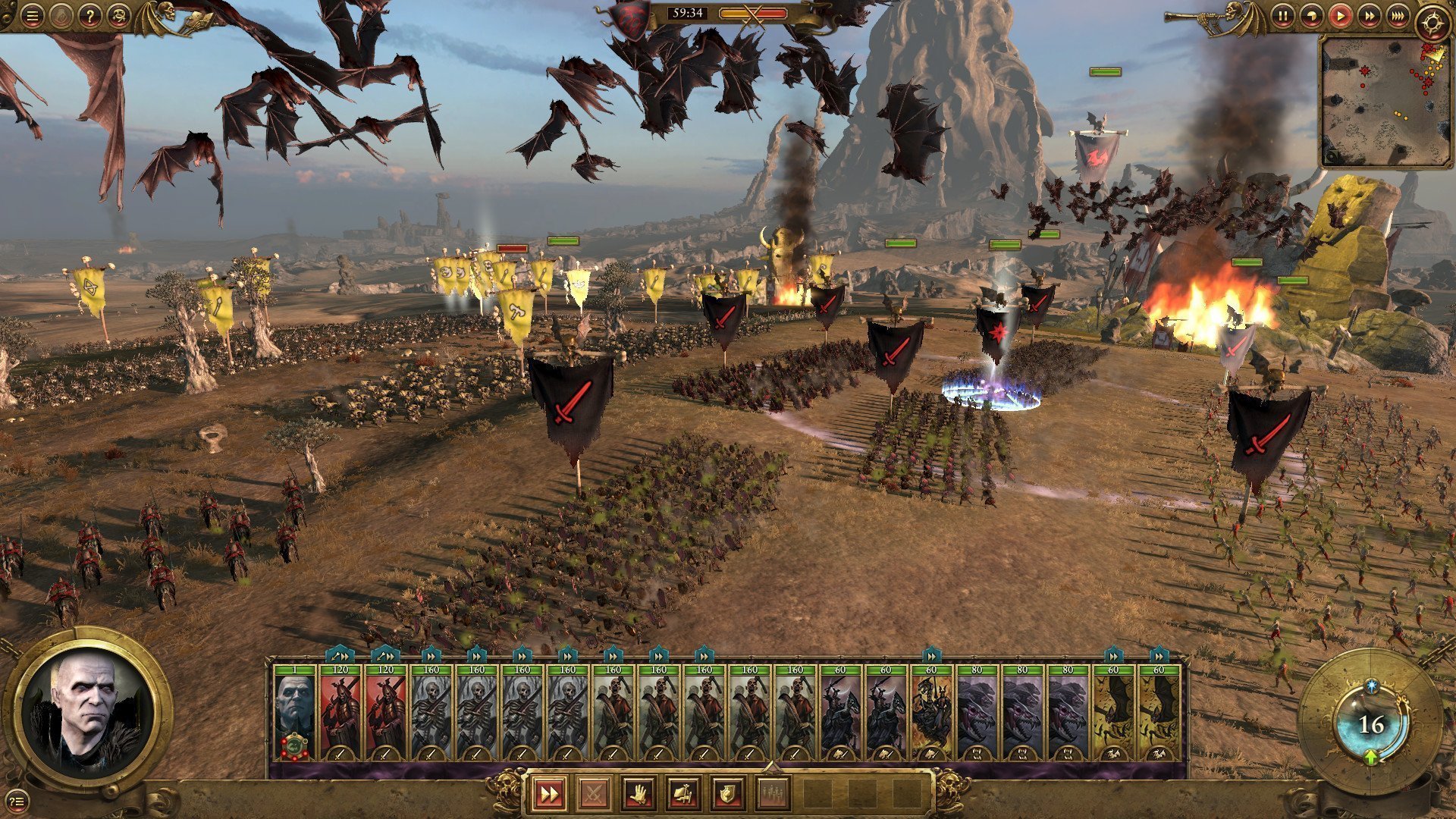 I enjoyed combat in Total War: Warhammer more than any previous Total War game. The differences between the four standard races go far beyond what you would expect in Total War games chained to pesky historical accuracy, instead of an affinity for cavalry or missile units some races simply lack them entirely. Morale ranges from stout Dwarfs that take an eternity to break to Orks who must like exercise for how quickly they run into and out of battle, where the Undead are unaffected entirely, preferring simply to crumble and face returning to the grave than bother to run away. Scottish Highlanders and Byzantine Cavalry are replaced by Goblins riding spiders, terrifying Wraiths, and Crypt Horrors as the points of difference between races. Monstrous units can destroy lines of infantry single handedly while Lords can take huge punishment and their abilities, magical or no, can similarly change the course of a battle.

The special units for each race are particularly inspired. Giant Spiders, Gyrocopters, garden variety Giants of the non-spider kind, Terrorgheists; evenly contested battles are an incredible experience and thanks to the impact of these special units battles can turn in a way previous games couldn’t match. There is more to be afraid of than ever before but also more ways to twist a contest in your favour, making battles more like the climactic fight of a Rocky movie than the slow, inevitable grind of a Floyd Mayweather bout that Total War could often resemble.

Yet like Mayweather fights, not all Total War battles are even contests. TW: Warhammer forces you to embrace the grind, particularly with the Humans and Dwarfs where units are not as expendable as their Greenskin and Vampire counterparts. That meant playing out hopelessly mismatched battles manually to overcome an auto-resolve that can be too generous to your overmatched foes and sees your own outmanned armies deal pitiful casualties to superior forces. Taking an extra 50 Orks out of a Greenskin Waaagh! tearing through your lands may make the difference when your primary Dwarf host makes their stand, but it doesn’t make playing out these inevitable defeats any more enjoyable. 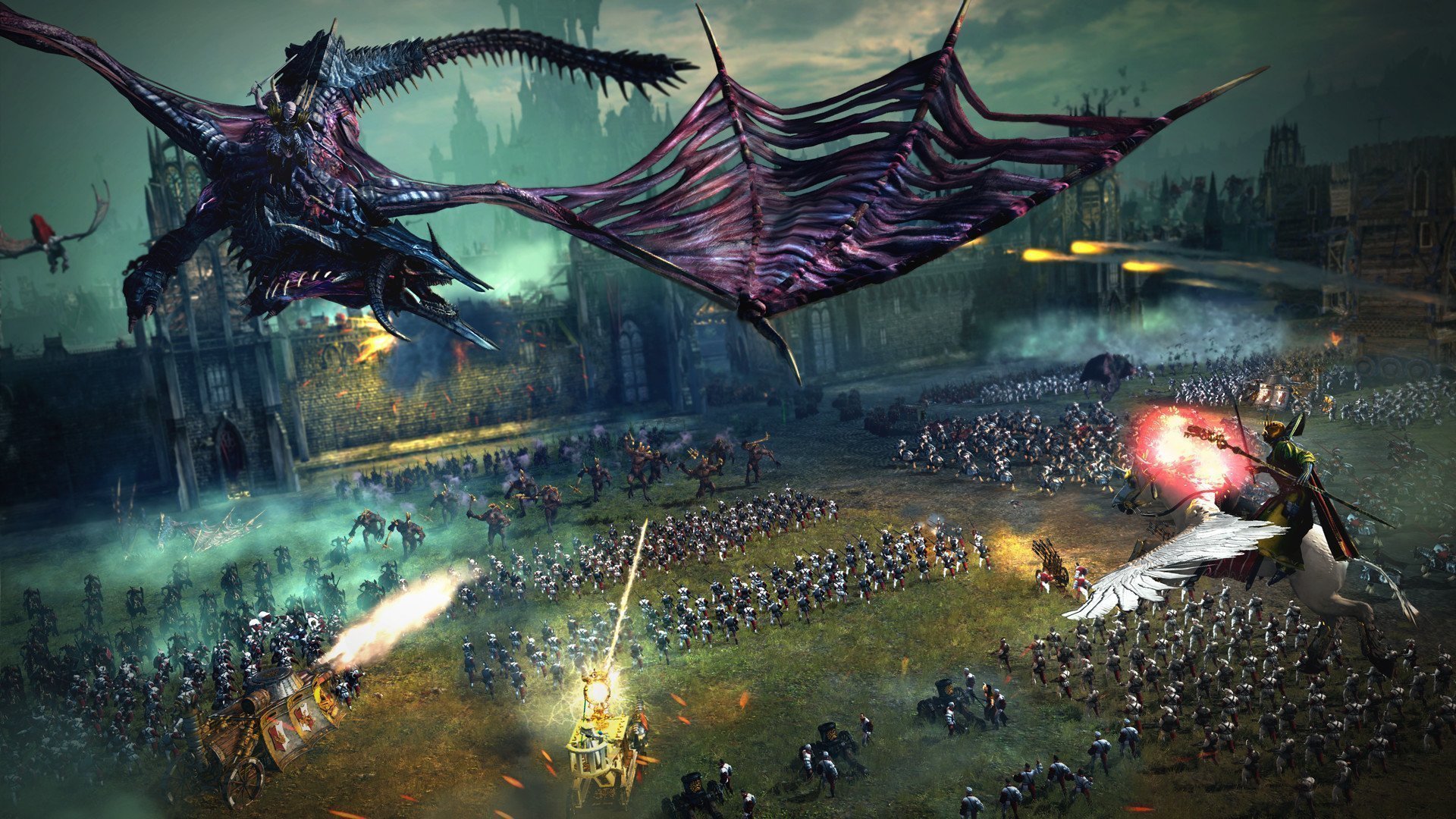 This is exacerbated by mechanics that limit where a race can colonise, meaning enemy armies are encouraged to march through your lands decimating your settlements turn by turn rather than making slow incursions into your territory. Stopping these rushes is crucial, especially once the Warriors of Chaos make themselves known. It all added up to only one in three battles I fought being legitimately enjoyable contests, though later in the game this was relieved as army upkeep became less of an issue, and in my first run through the campaign those epic battles were enough to make up for those less than stellar scraps. In successive playthroughs this is more of a concern.

Where variety has been added to the armies doing battle it has been taken away from the battlefields. If battles over bridges and chokepoints exist in TW: Warhammer I never saw them, and defending castles and settlements is lacking in variety compared to previous games. Weather conditions are set as well, you can only wait out the Winds of Magic in hopes of more favourable conditions, the snow and fog remain. I didn’t find this much of a concern but I do miss the chance to storm a bridge with a Giant Spider.

On the campaign map each race has some unique mechanics but plays out largely like a traditional Total War game. You are still balancing an economy, building structures, recruiting units, managing diplomacy and researching new technologies. Vampires can raise the dead for quick recruitment of basic units, Dwarfs must avenge any loss on the battlefield to cross the grudge from their big book lest they risk grumpiness and discontent, Greenskins must constantly be in battle to satisfy their ‘fightiness’. In the end you are still taking over territory and managing the balance between income and the upkeep of armies, but a tight map and short build tree meant I could turn most settlements into economic juggernauts to fund armies out of my capitals. The peripheral mechanics like grudges and fightiness guided my campaigns, but they did not define them.

What does spice up the campaign game is the presence of the Warriors of Chaos, sweeping down from the north at the campaign midpoint and stomping through territory like the Mongol hordes of Medieval II: Total War. If you are in the path of these monstrosities you will find this dominates your game, though in one Dwarf campaign Chaos was vanquished before it could reach my lands, an anti-climax of epic proportions for what is treated as a major narrative beat. The Warriors of Chaos are a downloadable, playable faction at launch but as they are not part of the base game I have not considered them as playable for this review. With only four races and eight total starting factions they would have made a welcome addition to the base game, but Total War: Warhammer is hardly lacking for content. 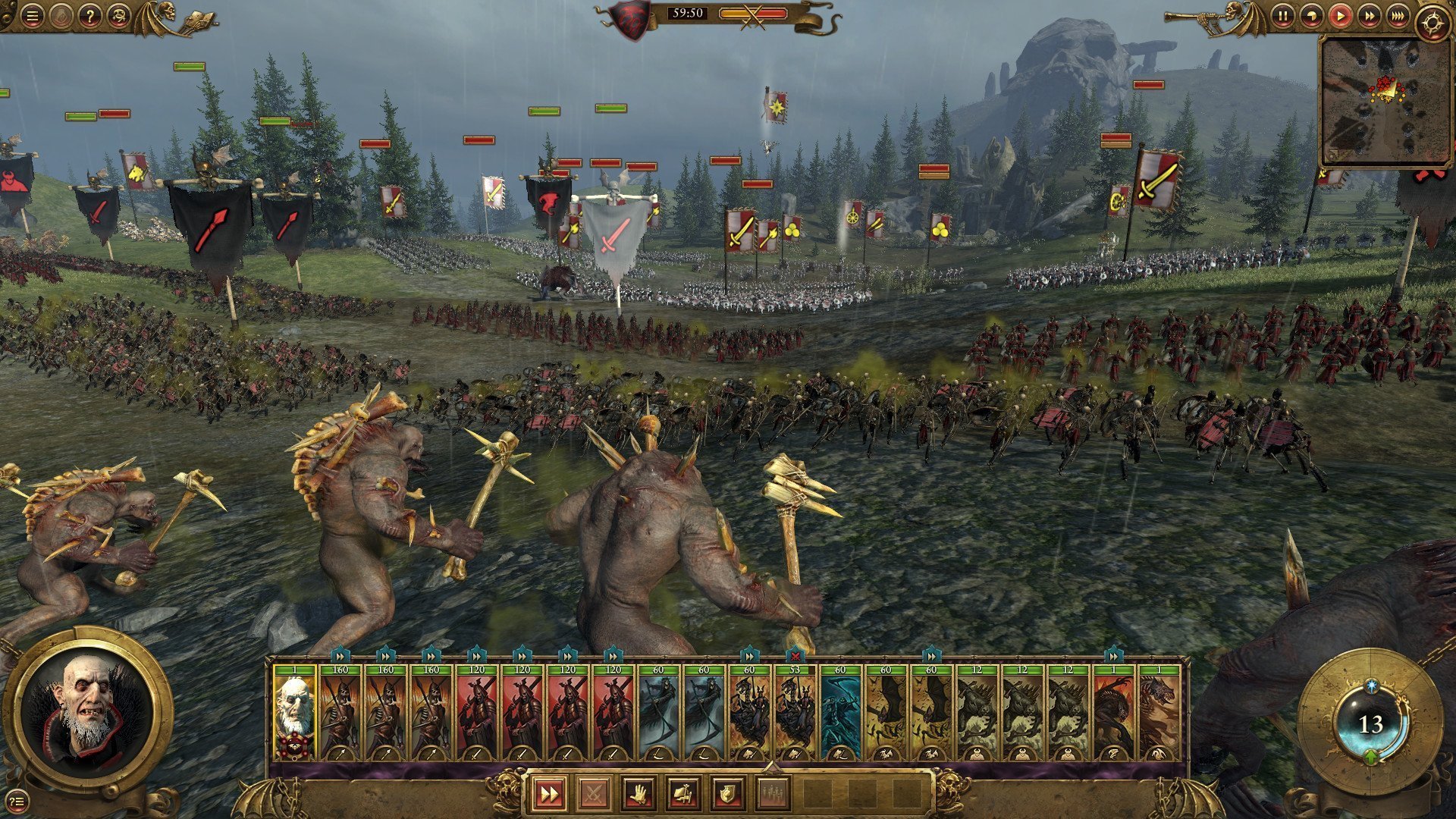 Further guiding your campaign are Quest Battles, a series of optional pitched battles that appear throughout the world and offer a unique equipment reward as well as a fresh challenge. These are usually interesting scenarios, defending against waves of reinforcements charging down a hill or rushing a position only to be ambushed on both sides, but they do often break the game thematically and are perhaps best approached as singular battles outside of the campaign.

Despite these bells and whistles, once the honeymoon period is over this is still Total War. The mid game is a bit of a grind, a balance of resource management and slow conquest, simplistic diplomacy and waiting for research to give you small benefits. There are still the problems many Total War games have had, while my time with Warhammer has been largely bug and crash free with strong performance there are still some AI quirks and failure can snowball, wasting hours of work in doomed campaigns should an unexpected army show up at your door. Diplomacy is a disappointment, I formed a truce with the Vampire Counts to focus on a Greenskin war only for my Dwarfs grumbling to rise as an arbitrary grudge was issued to take over a certain number of Vampire territories. I would turn down offers only to have the same offer made the next turn, I would take valuable gold to make peace with the enemy of a friend only for that same friend to then pay me to declare war on them soon after. At one point nearly every Lord and Hero I had was laid out by Greenskin assassins who had grown into unstoppable killing machines, fed by Dwarfen blood, my only relief came from eliminating the Greenskins entirely.

Total War with better battles is better Total War, and Warhammer brings exactly that to the table. The grand campaign is shorter than most Total War games thanks to a smaller (but tighter packed and much more interesting) world map and generous victory conditions that don’t require having every peasant in the land under your thumb, but in its most tense moments Warhammer reaches peaks even the grumpiest Dwarf would admire. Just running through each campaign will see you rack up over 100 hours of gameplay and that is before touching multiplayer or mods, and rest assured that “one more turn” aspect of Total War is still here and saw me rock up to work bleary eyed several times over the last few weeks.

If you still enjoy the campaign aspects of Total War then you will find Warhammer simply brilliant, the Warhammer license makes this the most interesting Total War game in years. If the promise of the most exciting battles isn’t enough to stir your loins then this is just a game of more research trees, resource grinding and shoddy diplomacy, the same you have played for the last decade. Warhammer brings out the best in its new bride, but it doesn’t change who she is.

Total War: Warhammer was reviewed using a promotional codes on PC as provided by the publisher.