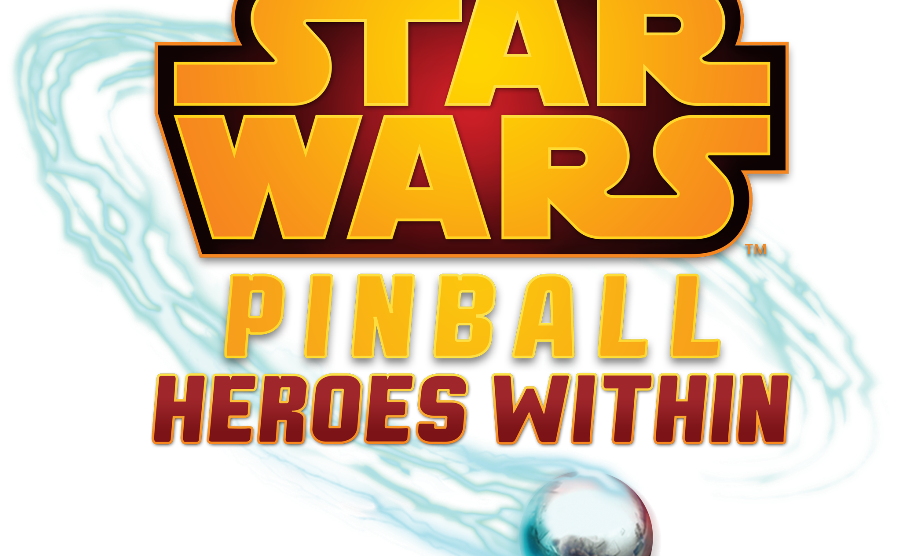 I have been a pinball aficionado since I was a little kid and needed a step stool to be able to see the tables in an arcade. I can’t count the amount of quarters I dropped into pinball tables through the years. One of my other loves was Star Wars. I couldn’t get enough of it. Fast forward to today’s age and two of my childhood loves have been blended together by Zen Studios. Sadly, the latest Star Wars Pinball pack marks the final installment of the Star Wars-themed tables. As a thank you to its fans, Zen Studios has included an extra table in this pack making it four tables instead of the normal three. 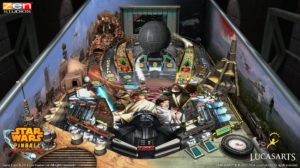 Somewhat similar to the Episode V and VI from the previous two Star Wars table pack. Table layout at first glance appears to be traditional with normal ramps and lanes. That quickly changes when you start to take on missions. The missions cover most of the major events from the actual movie, you’ll see things like the trash compactor scene, Princess Leia evading a Stormtrooper and making sure R2D2 gets away, and Han Solo’s “It’s too big to be a space station” line. The table stays true to the film that inspired it, even down to the soundtrack. It’s of medium difficulty; it’s not the easiest table that Zen Studios has made but it doesn’t have those overly precise shot requirements either. Overall a fun table just to knock the ball around, when you add the missions and tying it into the film with quotes and music it adds an extra dimension of nostalgia. 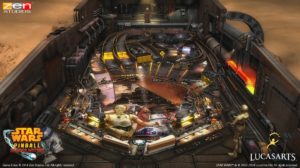 The beloved R2-D2 and 3CPO are front and center, no longer playing second fiddle. This table is all droids all the time. The first thing I noticed when I played this table was how beautiful it is. Sure, it’s just a pinball table and gameplay and table layout are what make for a great experience – but this table is graphically impressive. It takes place in the one place no droid ever wants to be… inside a Jawa Sandcrawler. The table features the expected comedic lines of 3CPO talking to his little droid buddy as they work together to get away from the Jawa. This is another medium difficulty table but a more fast paced than the Episode IV table. Of the four new tables this one seems the most straight forward in terms of laying out the missions and how to progress, it has a classic pinball table feel.

Masters of the Force 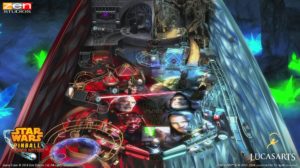 This one covers exactly what the name implies: the Masters of the Force, both for the Light Side and the Dark Side. There are appearances from all the major players that you’d expect; Obi-Wan and Yoda to Darth Maul and Emperor Palpatine. Graphically, it’s another gorgeous table with the Dark Side and Light being represented by a division down the middle of the table even down to the color of the flippers. Gameplay wise, this is one I have to spend a lot more time on to discover the inner workings of it. My first couple of plays on it, it almost felt like it was too compact on the sides. It has the awesome music score and voices that we’ve come to expect with the Star Wars tables and that’s certainly a bonus. Yet, after playing it on my Xbox as well as my Vita there just seemed like something was off with it. This very well could be because it’s a new table and I don’t understand how it works yet, that’s happened before, but as of right now it’s my least favorite table of this pack. 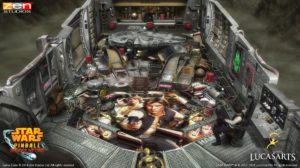 Everyone’s favorite intergalactic badass bounty hunter finally gets his own table. There are two things that come to mind in addition to Han: the Millennium Falcon and Chewbacca. Both have a strong presence in this final table, everything from Millennium Falcon secondary playfield to Chewy ripping open a grate and tossing a multiball onto the table. This table is fast paced and punishes you for missing your mark on shots. There’s very little room for error when you start getting into the missions all leading you to try and destroy the Deathstar. Some great Han one-liners and quotes are rolled into the table as is a soundtrack I probably won’t be able to get out of my head for weeks. The very song that was playing in the Cantina when Han shot first… yeah I went there. This table is easily the most difficult of the four and when the multiballs start rolling it’s about as close to controlled chaos as you can get. If I had to pick one thing about this table I dislike it’s that so much stuff is going on, hidden, and to do it’s almost overwhelming. So far this is the table that I think will be the lowest scoring and take the longest to figure out in terms of all the missions, earning extra balls, and mastering.

The Star Wars Pinball “Heroes Within” table pack is a good mix of all the things I love about pinball with all the memories I have about the Star Wars universe. Hearing those iconic noises and music will never get old. While I may not have been enamored with every table in this pack, there is no table that I will never play again. Some will take longer to learn than others, some will be more frustrating than others (I’m looking at you Han Solo). At the end of the day, pinball is only as good as the table design and the golden rule of “is it fun just to knock the ball around” and the answer to that is most certainly yes. As Han Solo once said, “Hokey religions and ancient weapons are no match for a good pinball blaster at your side kid.” Well, he may not have said it that way, but that’s what he meant. Fans of pinball and fans of Star Wars won’t be disappointed with this table pack. If you’re a fan of both, it’s even better.

This pack is out now on Xbox 360, PS4, PS3, PS Vita, PC, Android, iOS, Mac and Amazon for $9.99 USD. It’s a cross-play title on PlayStation, so you can move between PS3 and Vita. Those with PS4s: make sure to purchase the pack on your PS3 or Vita and then import the tables to your PS4 at no additional charge.