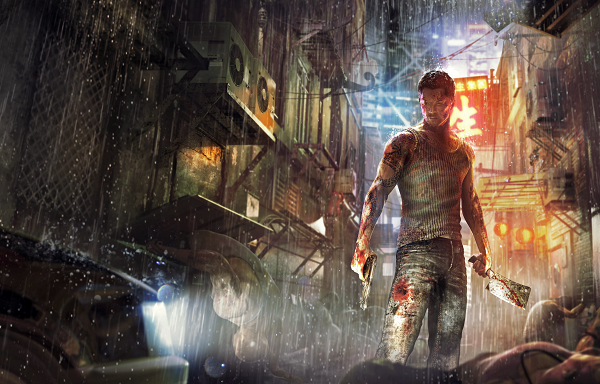 Since Grand Theft Auto IV the narrative disconnect of open world games has come into focus. The freedom of an open world environment is often at odds with telling a gritty, realistic tale; Sleeping Dogs sets itself up to struggle with that balance. An undercover cop probably wouldn’t steal luxury cars, run over pedestrians and gun down shopkeepers, even while attempting to infiltrate the Hong Kong triads. From early on Sleeping Dogs encourages (and requires) a suspension of disbelief to just enjoy a well told crime drama and try not think too hard about what would happen to an undercover officer who kills approximately 90% of Hong Kong’s gangster population (and a significant number of innocent pedestrians) in the space of a few months. Once you can reconcile that, Sleeping Dogs: Definitive Edition is a grand old time.

While not offering much in terms of player influence, the story of Sleeping Dogs is strong, supported by excellent voice acting and brutal plot twists. You will see most of them coming — subtlety isn’t the game’s strong point — but just because you expect something bad to happen to anybody who says they are “getting out of the game and becoming a family man” doesn’t make it any less devastating when it happens. The ‘choose a side’ moment you expect from an undercover cop trying to break up a gang of his childhood friends never eventuates; Sleeping Dogs is confident in its narrative and justifiably so. It is told over 30 missions that again offer little freedom but plenty of variety between car racing, on foot chases, brawls, shootouts and police investigations. The latter involves some basic hacking mini games, of which only the camera hacking puzzle overstays its welcome. The game moves at a frantic pace, your next task is always clearly marked and if you have played GTA in recent times it will feel very familiar.

Sleeping Dogs begins as a street brawler focusing on hand to hand combat, guns aren’t introduced until deep in the game and even in the late stages brawling plays a critical role. The melee combat feels great, based around a rock, paper, scissors balance between grappling, striking and a counter system with generous timing windows. It isn’t revolutionary but it is fun and occasionally difficult. Weapons such as meat cleavers and tire irons are available but they limit your ability to counter and grapple; finding the balance between the room clearing power of a cleaver and the improved grappling and dodge abilities you have while unarmed is the key to success in many battles. 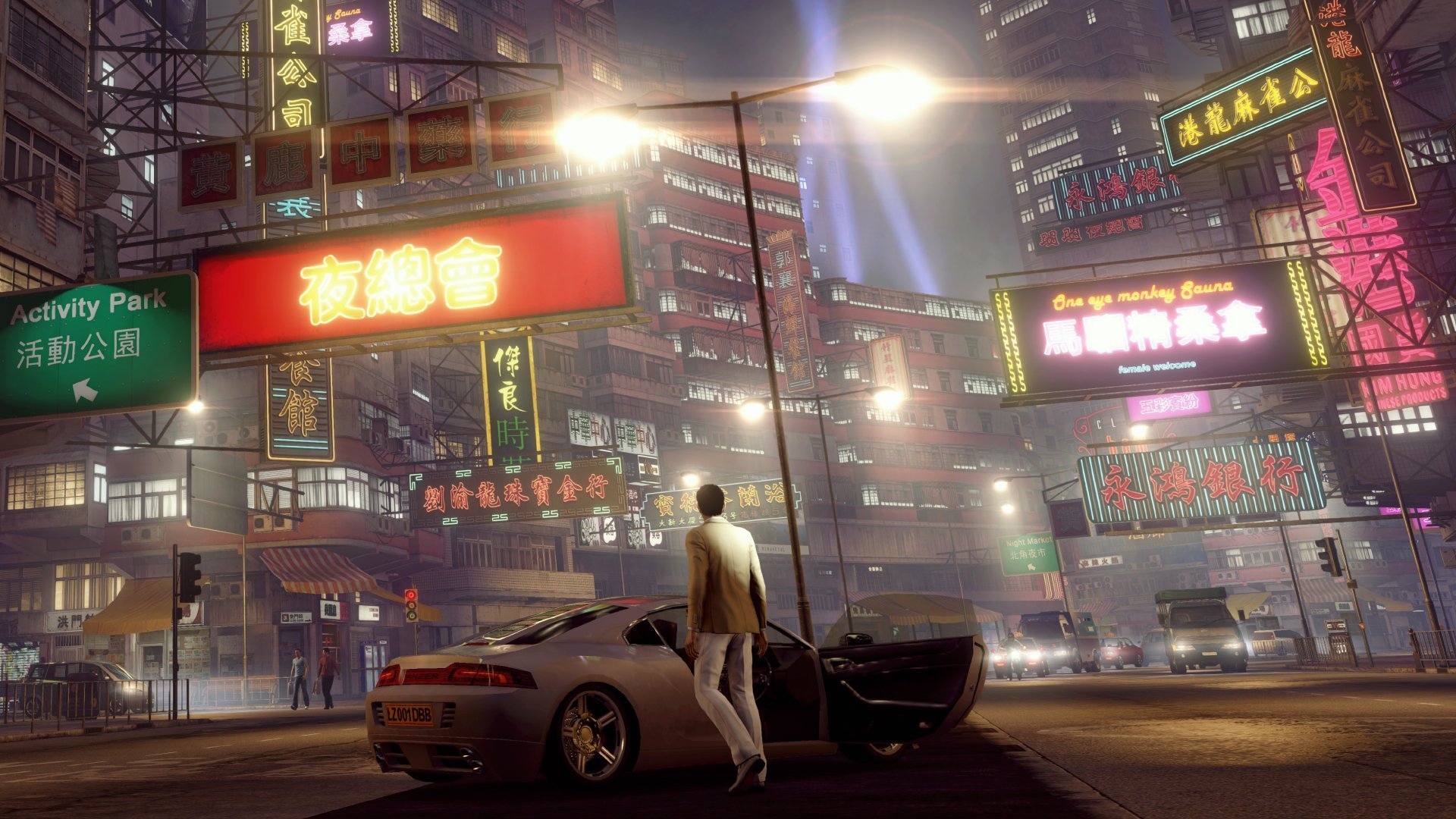 At odds with the Kung Fu-style combat are the brutal environmental attacks, some of which had me cringe in pain as an enemy was jammed head first into an exhaust fan or impaled on a meat hook. This is your first indicator that Sleeping Dogs doesn’t expect you to pay any more than token attention to role-playing an undercover officer. One early narrative beat is triad suspicion that you are a cop due to your reluctance to kill; by this time I had ended dozens of lives by electrocution, fan decapitation and three storey fall during standard combat. I enjoyed Sleeping Dogs a lot more once I embraced this absurdity and the Definitive Edition encourages you to be a little silly with a huge number of novelty outfits taken from popular Chinese film and other Square Enix properties. These bestow bonuses on your character ranging from additional fighting styles (the Drunken Fist being a personal favourite) to special abilities like slowing the counter window. It also creates amusing situations like meeting your supervising officer dressed inconspicuously as Bruce Lee or going on a date in Georges St Pierre fight gear, including headband.

Outside the main story, there are over one hundred side-events available ranging from street races to police busts and underground fight clubs. Favours were my personal favourite, particularly one guy who kept requiring a getaway driver as he caused escalating levels of havoc for men whose girlfriends he coveted. Races have the potential to infuriate but the handling is forgiving and makes it easy to perform amazing feats of ramming, sliding and near misses, with ramming particularly satisfying. They are also a key source of ‘face’, one of several measures used to upgrade your abilities. Obedience of the law in missions is encouraged with cop score (which did enough to satisfy my urge to roleplay an officer of the law), while strong performances in combat are rewarded with triad score. Cop score adds an interesting element to missions as you try and drive cleanly while achieving your goals, and makes you think twice about ramming that opposing vehicle straight into a crowded sidewalk. All contribute to various paths of unlockable abilities such as fight moves or silent carjacking.

Sleeping Dogs‘ Hong Kong is beautifully designed but looking too closely reveals last generation quality architecture and shortcuts with texturing. The frame rate dips occasionally, not so often to be a problem but surprising nonetheless (the Xbox One version was used for this review). Sound design is great too, the in world chatter is often amusing, combat sounds brutal and apart from some rather terrible exceptions (Yunjin Kim being the obvious one) the voice acting is phenomenal. The last generation origins of the game seep through every now and then but the quality of the city design and the impressive volume of foot traffic (particularly in markets and business districts) create an immersive if slightly fictionalised version of Hong Kong. I found myself constantly engaged with Sleeping Dogs, largely due to superb pacing and the great core mechanics. Wei Shen is a well-developed protagonist and the updated facial models for the Definitive Edition enhance his emotions (although the improvements make other, non-enhanced character models stand out all the more). 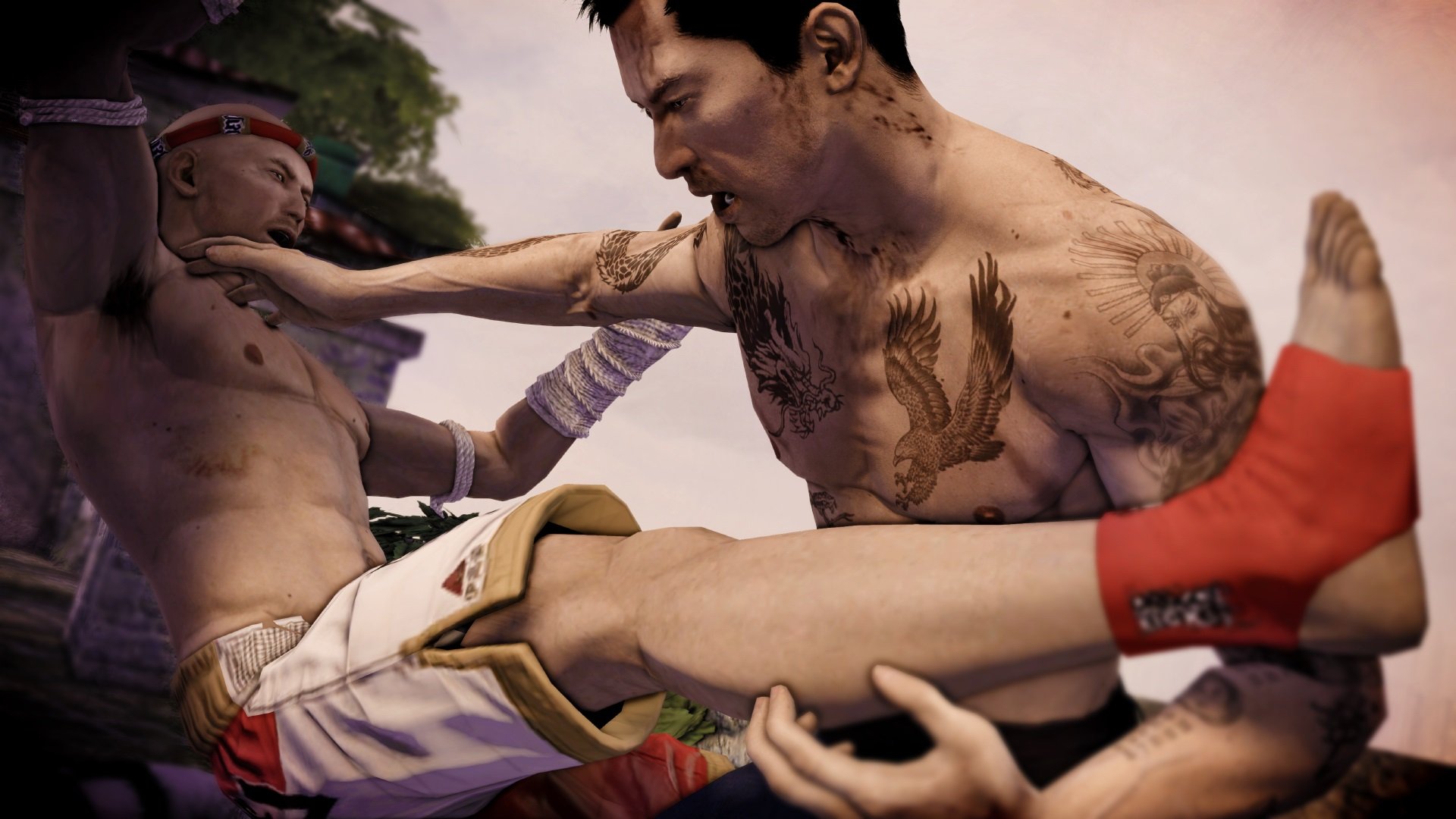 While I enjoyed the main game and side missions from start to finish, the extra content is unfortunately lacking. “Zodiac Island” is the exception, a fun, Kung Fu movie inspired fight club that gets the most out of the melee combat and offers something new in one on one battles. It’s funny, stylish and a good time. The same can’t be said for the separate stories, “Year of the Snake” and “Nightmare in North Point”. “Year of the Snake” gives you a taste of beat cop life but doesn’t have the strong characterisation of the main game to back up some dull mission design. “Nightmare in North Point” tries to channel the supernatural for an outlandish side story but gets bogged down by repetitive combat and again, poor mission design. Despite opportunities for laughs neither story takes full advantage and both suffer for not integrating with main game progress and the experience systems. Both can be safely skipped. Sleeping Dogs also goes too far every now and then with unnecessary swearing and despite the presence of some strong female characters the portrayal of women isn’t wonderful, particularly some of the language used. It shouldn’t turn you off the game, but it is worth noting. It also helps characterise some of the more despicable antagonists, but that could have been done without needing to go so far at times.

Sleeping Dogs: Definitive Edition ties a fantastic open world game to a strong story and great characters. The hand to hand focus is refreshing and it is backed up with an open world fighting engine that holds up against the best in the genre (think more Arkham series than Virtua Fighter) and a racing engine that makes the on wheels part of the game core to the experience. There is so much to do, plenty of variety and for the obsessive, hundreds of collectibles that offer tangible in game rewards. It isn’t a revolution in either open world gaming or storytelling, but it shines with polish on both fronts. For those that experienced it last generation there is little here to warrant another purchase, but for the many out there that skipped Sleeping Dogs first time around I strongly encourage you to give the Definitive Edition a try. I loved it.

Sleeping Dogs: Definitive Edition was reviewed using a promotional copy of the game on Xbox One, as provided by the publisher. 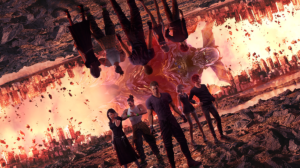