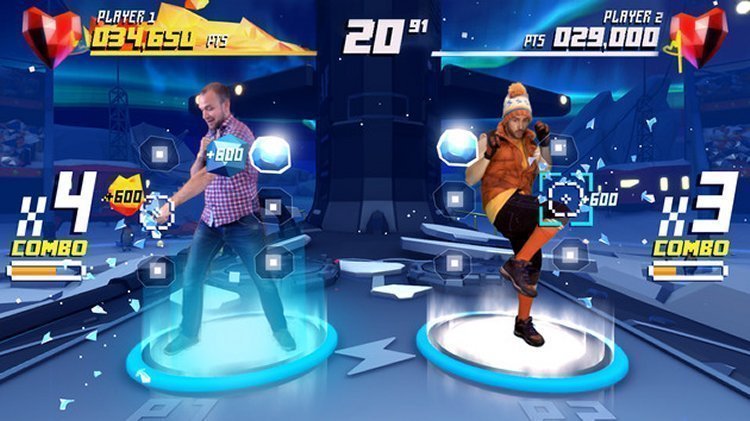 Kinect games have always been hit (Disney Fantasia: Music Evolved) and miss (Star Wars Kinect, Steel Battalion: Heavy Armor, Kinect Party…). Okay, far more miss than hit; with the exception of dance and fitness titles, Kinect’s pretty much just a voice command tool. With Microsoft’s decision to sell the Xbox One without the peripheral, Kinect games seem to be coming fewer and fewer with each passing month, but the good thing about this is that the titles we do see released are of quality.

Shape Up easily falls into that ‘good but probably won’t be played by a lot of people’ category.

It looks like Ubisoft’s shelved the Your Shape: Fitness Evolved brand in place of Shape Up. Honestly? It was a good decision. While Your Shape‘s always been a great fitness tool, it simply can’t compete against the hardcore Nike+ Kinect on Xbox 360 or the day one, mostly free Xbox Fitness on Xbox One. Shape Up tries to innovate the motion-controlled fitness genre by giving you a workout that’s fun and with as much gamification as possible. 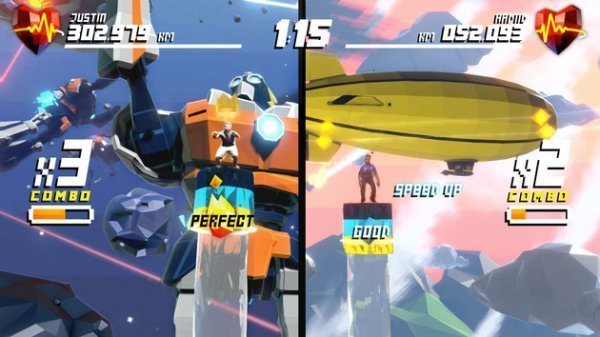 Rather than just present you with straight-up workouts, Shape Up frames them to you as part of a fitness quest. The main game’s two quests will train you for a week and then pit you against one of two final bosses. Each day consists of a 15 minute session with four mini-games and two proper cardio sessions. The mini-games are WarioWare-like in their ridiculousness, with squats that send you to the moon, running in place to virtually propel yourself along the top of a speeding train and much more.

The quest’s cardio bits are led by the game’s male or female leads, and are standard fare. Stretches, bicep curls and other common cardio moves are presented in a deadpan way with Lily, or with a whole bunch of humour thrown in thanks to Jake. While I very much enjoyed Jake’s jokes – basically, making fun of the bro-like culture of the gym – I have a feeling the same routine over and over again will be like pounding a nail into my temple.

The two final bosses in Shape Up are horrible stereotypes: an ever-giggling Japanese schoolgirl called the Beatmaster, and a masked (padded) muscleman called the Luchador. Because it’s Ubisoft, you can buy more quests through a monthly Shape Up subscription that I very much passed on. While there are a lot of mini-games to choose from, it seems almost criminal to charge $70 AUD for only two quests, with added option of dropping more money for extra variety. Poor form. 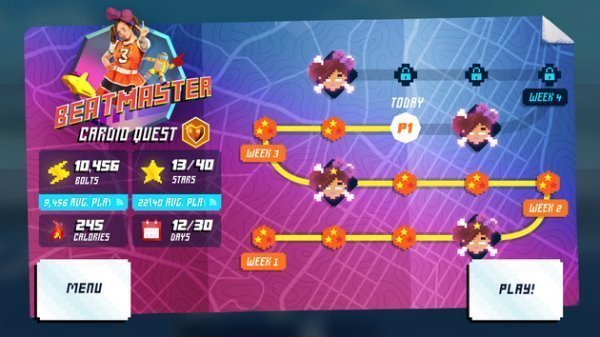 Shape Up‘s mini-games are the best bit of the 8-bit styled, very over-the-top game. They’re damn hard work, but true to the game’s mission, they don’t leave you feeling like you’ve just put in a spin class down at your local. Because you’re given a score at the end of the effort, those of us who enjoy a challenge will definitely come back for more. Ubisoft plays this up even more with the introduction of a rePlay: a recording of either yourself, a friend or a Shape Up lead that makes the game a 1v1 affair at all times. If you beat the Shape Up lead, you’re encouraged to connect with a friend to try to best them. If that’s not your style, you can simply take on your best performance to date. It’s a neat, easy little way to keep motivated.

If you’re into companion apps, Shape Up Battle Run on iOS and Android will gamify your daily run. It pits you against an opponent, quest-style, and tasks you to, well… keep running. There’s not much too it, but that’s really all you need: an added incentive to be active.

In the end, Shape Up has two things going against it: it’s a fitness game, and one using Kinect at that. If you avoid exercise like the plague when you’re gaming, you’ve probably already passed on this review. On the other hand, if you’re wanting a new way to keep exercise fresh and fun in your life, this one’s for you. It’s a much better alternative to, say, Your Shape 2015.

Shape Up was reviewed using a promotional copy of the game on Xbox One, as provided by the publisher. Click here to learn more about Stevivor’s scoring scale.