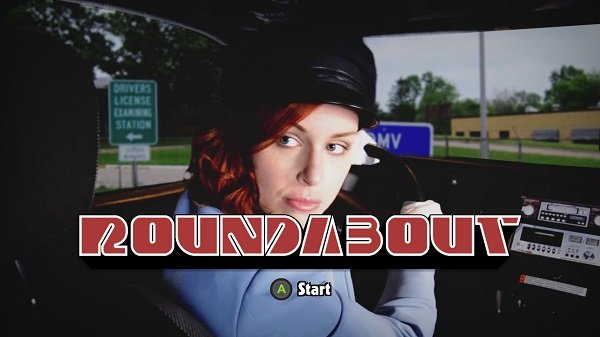 Much like its fellow staples of 1970’s life, the eight-track tape and Betamax, the revolving limousine has long been forgotten by our technology spoiled generation. Roundabout tells the story of Georgio Manos, the world’s first proponent of revolving transportation, using another long forgotten technological relic, full motion video. What follows is a tale of love, betrayal, heartbreak, revenge and redemption, along with the occasional wedding, mountainside chase scene and an acid trip with a talking skeleton.

You control Georgio’s constantly revolving limousine from a top down perspective reminiscent of the 2D GTA games. Missions see you taking on Crazy Taxi-style fares from a collection of colourful FMV characters, racking up your multiplier by hitting checkpoints along a deviously crafted route weaving through cars (parked, moving and sometimes just revolving), trees, buildings and of course, through roundabouts. Some of Roundabout City’s terrain is destructible but most is stoically immovable, and Georgio can take only a few impacts before exploding in a ball of flames. Failure is barely an obstacle, you instantly restart at your last checkpoint in a mission, and Roundabout’s challenge comes from negotiating the city’s open world as fast as possible. 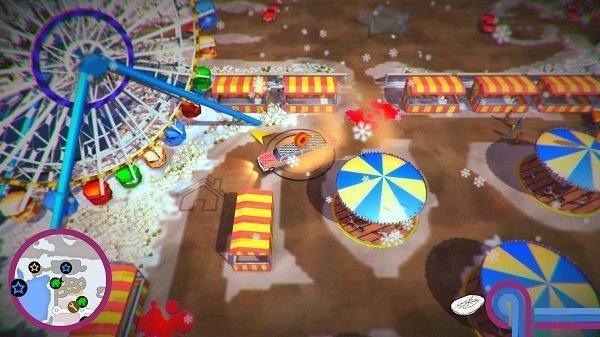 Roundabout may not take its premise very seriously, but developers No Goblin don’t joke around when it comes to mechanics and controls. Roundabout is tight, incredibly so considering you are moving a five metre long revolving vehicle through perhaps the most treacherous city known to man. Everything in Roundabout is designed to remove the pain from what should be an inherently frustrating experience; collision detection is strong, checkpointing in missions generous and restarting from a wipeout instant. Roundabout teaches you to dance and then throws you to the city to waltz, your once awkward, revolving limousine soon becoming a natural partner. Then you are taught dark, secret steps in the form of car abilities; jumping, slow motion, shrinking, even swimming, allowing you to move over the slipperiest of dancefloors with grace.

Roundabout is at its best when structured, with missions offering a tailored navigation challenge punctuated by amusing set pieces. Missions are bookended with FMV cutscenes that are the right mix of cheese and humour, the game sits with tongue firmly in cheek at all times. The story mode is short, not overstaying its welcome, and those enamoured with the game have plenty of minigames and hundreds of collectibles to chase. Each mission has leaderboards for times and a selection of maddening challenges to complete; the truly dedicated can even attempt to become heroes of ‘electronics sports’ with a cutscene and dialogue free speed run of every mission in the game, back to back.

Collectable chasing often turns the game into Assassin’s Car, seeing you leap from building to building or tiptoeing (as much as a revolving limousine can) through tight spaces. Roundabout makes a show of placing collectibles in a way that challenges you to get there, whether than requires pinpoint precision through a maze or finding a way to the top of the highest building in the city. The open world checkpointing can become frustrating here, where in-mission you restart on or near the objective path, in free roaming you are sent back to the nearest mechanics shop which can leave you with a dangerous trek to get back to your goal. It isn’t a big issue, but when a large part of the games extended value is the collect-a-thon it is worth mentioning. Some kind of fast travel would also be appreciated once the game is complete. Despite those issues I had more fun chasing collectibles in Roundabout than I have had in most games. Some of that was the novelty horns they unlock for your limo, but most of it was how the game makes the challenge getting to things rather than looking for them. 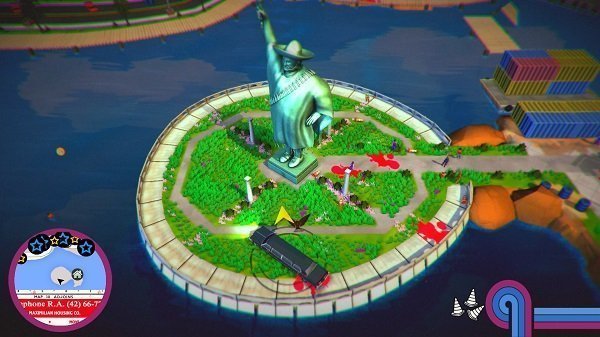 There are some technical hitches, but never in the core controls. Most are caused by jumping onto strangely shaped objects. The music is funky but the sound effects started to grate after a while, mainly the tyre screech with every press of the accelerator and the ‘horn of failure’, which is a clever way to indicate your vehicles health but in challenging sections made me feel like the game was playing me off the stage in shame.

Roundabout is simply a lot of fun. If you can laugh along with it you are in for a great time, but even those unmoved by the full motion video shenanigans will find something to like about Roundabout in the core mechanics. No Goblin’s mission statement is to “become the leading developer of original mechanic-driven video games”. Roundabout is a great start towards that goal.