Risk in 2016 is probably not the Risk you remember. The alliance-heavy all night battles where a broken word could end friendships or ruin a family holiday are gone; in their place is a less attritional structure where meeting goals and earning stars replaces total board domination and eliminates hours of tiresome die rolling. 2010’s reasonably well received Risk: Factions used that formula to great success and Risk: Urban Assault continues the new tradition.

Urban Assault has a threadbare but prescient premise: the world has fallen apart due to global warming. Five factions now battle for control of what remains of the world’s great cities. Urban Assault ditches the imbalances of the natural worldwide map by creating tight, enclosed city boards that ensure conflict is never far away. Don’t mistake a premise for a story, there is a small campaign game here but nothing connects the scenarios beyond the factions you can choose from, and aside from this hat nod to climate change Risk: Urban Assault makes no further statements on the nature of man, or anything at all.

The brand of Risk that Urban Assault presents is solid if hardly exhilarating, if you never cared much for rolling dice to win battles then Urban Assault won’t change your mind. Games centre around the need to claim Town Halls, which a faction can build upon claiming an entire neighbourhood of a city. Controlling a Town Hall is one of several ways to earn Stars, the currency that allows you to build offensive and defensive structures, or ship in troops a la trading cards in Risk classic. 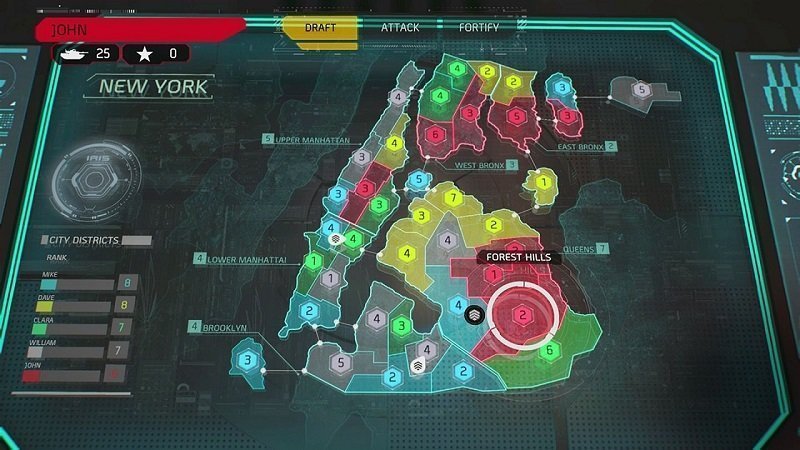 Town Halls are more than just good earners, once there is more than one Town Hall on the board an election is held each turn to decide a mayor. The Mayor can choose to put a 3 Star bounty on another faction, claimed by the player who takes the most territory from the exiled faction that turn, or take a straight reward of 2 Stars but having to give one of their opponents a single Star in return. As a mechanic it discourages “turtling” and replicates somewhat the ever important diplomacy aspects of Risk that are usually lost in the digital format.

Further spicing things up is the presence of commanders, super units that have special combat abilities such as “once per turn eliminate three enemy troops” or “put up a shield that can take three enemy shots”. Some of these I found much more useful than others, though my faction choice usually came down to the “twice a turn you can roll a die to take out enemy troops”, not so much because of the power but because the animation for that power takes 13 seconds to play out, a wait I found less infuriating on my own turn than the A.Is.

Risk: Urban Assault has no respect for your time. On some maps you will encounter frequent slowdown, baffling when on screen are only some basic digital tanks and a few flashing effects. You can select “fast AI mode” but you will still be forced to watch every faction leader animation and worse, in some battles when the faction leader uses their ability the “autoresolve” is disabled so you have to watch every painful roll and animation play out.

The fast AI turns still leave you watching too many animations but they do brush past important AI decisions such as building Town Halls or when a ceasefire is offered to you, something you can only check yourself by going two menus deep on your own turn. Some basic options here would be appreciated, checkboxes for “watch no battles”, “show animations” and to select what events are important to you in an AI turn. Instead you are forced to wait a minute or two between every turn in a full five player match and still manage to miss crucial information. 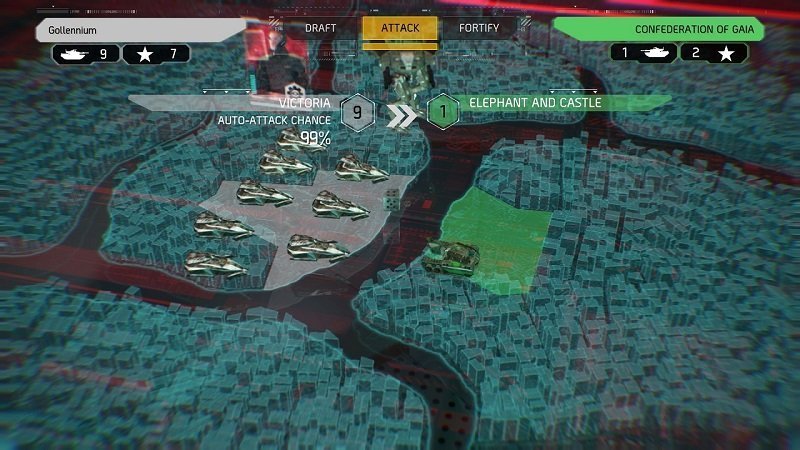 Adding to the frustration is the layers of crap Ubisoft and Hasbro heap onto their products, particularly the Hasbro Games Channel that pops up meaningless, non Xbox Live achievements over the game board which is still playing out in the background, blurred and without your control. This worthless nuisanceware insisted on telling me I reached a new level after every achievement unlock, regardless of whether that level actually increased. It makes Uplay look useful in comparison.

The game itself is fine, an interesting if hardly revolutionary take on a classic board game. If you have played Risk: Factions, recent editions of the board game or the great Risk: Legacy you will know what to expect. The AI is at times oblivious to game situations, forgoing obvious opportunities to win and avoiding responsibility when in a position to stop a faction who will clearly win next turn without their intervention. Online multiplayer has some interesting functionality, if an extremely low player base: I couldn’t find a game on Xbox One from several attempts. The League system they have implemented looks interesting but I doubt the player base is ever plentiful enough to see that potential realised.

Risk: Urban Assault is a decent game wrapped in a terrible package disrespectful of the player and their time. It throws pointless animations, cutscenes and bloat into a board game that is already well known for being a soul sucking grind. If this was just a board game I’d begrudgingly recommend it to people who really like Risk but as a video game I find it hard to recommend to anybody.

Risk: Urban Assault was reviewed using a promotional code on Xbox One, as provided by the publisher.