In 2008, DICE unleashed Mirror’s Edge upon the world. With a strong female protagonist, fluid parkour and a futuristic sci-fi setting, the first-person action title received its fair share of critical acclaim. Yet, all the praise in the world couldn’t hide a flimsy plot, trial-and-error gameplay and a relatively short gameplay experience. Mirror’s Edge was original, but flawed. With this new reboot of the franchise, Mirror’s Edge: Catalyst, DICE hasn’t learned much from its past mistakes.

Catalyst modernises the 2008 release and changes things up a bit to create the bleaker, sterile, futuristic city known as Glass. Still, the core pillars remain the same – as runner Faith, you take to rooftops, vaulting over objects, wall-running between buildings and clambering up pipes to reach various goals. Along the way, you’ll encounter evil-doers who’ll force you dodge, punch and kick to progress. Main and side missions have you climbing up buildings to activate McGuffin-type switches, while additional quests see Faith hunting collectibles and delivering packages under the duress of tight time limits.

Just as in 2008, running is extremely fun and rewarding. It’s also the area where DICE has made changes that actually work. Runner’s Vision now shows an actual path in-game rather than just having pipes and vaultable objects highlighted in red. While this (admittedly optional in that you can turn it off) addition is absolutely required – I can’t count how many times I was confused as to where to go next in the original – it means things get easy, quickly. This isn’t a bad thing; Catalyst is hardly ever about trying to figure out how to get from one place to the next, but simply having fun getting there. I felt clumsy and stupid playing Mirror’s Edge and more like a bad-ass in Catalyst. Running reminds me of similar experiences in the failed Prince of Persia reboot that I loved so much. 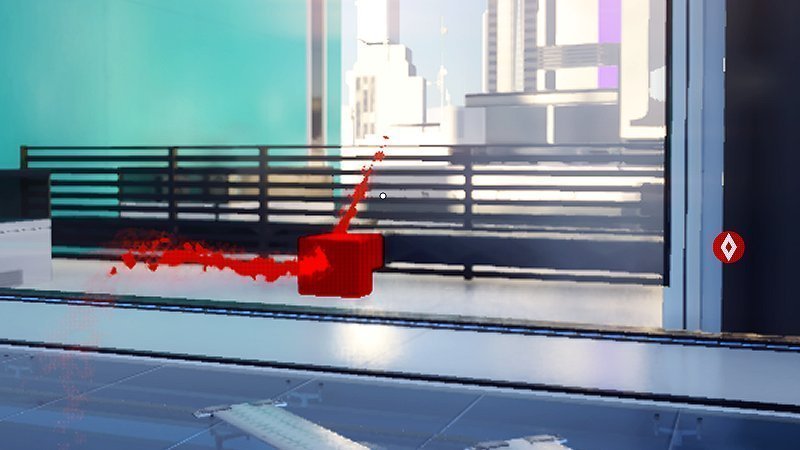 Looking at Catalyst’s map demonstrates just how many diversions Faith can undertake; at its peak, like in any Ubisoft game, you’ll have too many markers to properly digest. Sadly, most markers offer up too similar experiences, such as DICE’s time trials differing little to user-generated ones. As a pro-tip, use the filters to remove most of the clutter, until you actually want to try these allegedly different tasks. Character-driven side-missions are worth going through, but they hardly affect Faith or the world around her. The best bit of side-missions, by far, are the Assassin’s Creed-style GridNodes, which you’ll need to climb up to deactivate (another pro-tip: they also allow for fast travel). In those areas, Runner’s Vision is inaccessible and you’ll need to engage your brain to figure out how to meet the objective. They’re great fun, as are Security Hubs that provide a bunch of KrugerSec enemies to bash up if you’re so inclined.

DICE has also introduced Zelda-esque open world elements, requiring you to progress through the story to access some parts of the futuristic, sterile city of Glass. While it’s nice to see new areas after a couple of hours, the additions are cumbersome. Faith first gets an EMP device that shorts out large fans to pass through them, but to do so, you have to almost stop running, mash the B button and then start up again. For a game that’s most exhilarating when moving at a frantic pace, the requirement to stop swiftly kills the excitement.

Faith’s gear slowly unlocked is tied into the new XP system, but this is similarly flawed. She has numerous abilities waiting in the wings… but you’ll soon find most upgrades aren’t merely linked to one another, but to missions and side-missions as well. I played for a good couple hours with upgrade points that I couldn’t use, just because I hadn’t progressed far enough in Catalyst’s story. It makes more sense to simply lock abilities to mission completion rather than give players a false sense of upgrade freedom. 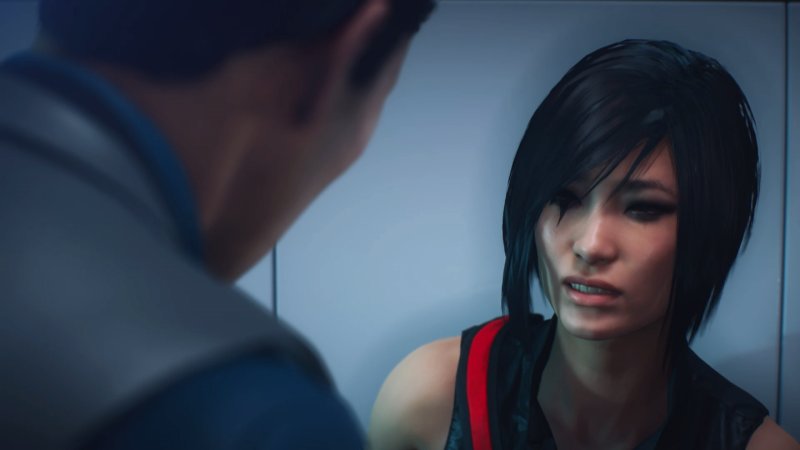 Combat’s been tweaked too, but it’s — pardon the pun — hit and miss. Gunplay has been dropped entirely, so everyone’s on equal footing. As a result, fights basically boil down to dodge, kick, dodge, kick, dodge; rinse, repeat. Unless you have to take everyone out – and there are sequences where this occurs – the parkour system encourages eliminating enemies directly in your path and avoiding the rest. In areas where you’re forced to fight — basically in a square arena with multiple enemies — it’s easier to do the dodge dance than build up the necessary speed to perform parkour combos. For a game that focuses on parkour, it isn’t integrated well into mandatory combat.

Simply put, Catalyst’s story sucks. First, in trying to play it safe, it presents a Faith that is far more shallow and less likeable than in 2008. Second – and without spoiling the plot – there are beats that can be smelled coming from a mile away. Running from main mission to main mission will have you completing the story mode in around five or six hours, and while not an issue in itself, the fact you’re not doing anything exciting during that time sure is. Once you scratch away the clichés and plot points meant, ineffectively, to elicit emotion, nothing changes in Glass from start to finish.

When things (sort of) happen, it’s all largely political and boring. Characters — mostly scientists — do things for inexplicable reasons, in an attempt to evoke a dramatic conclusion that ends with a whimper rather than a bang. It all reeks of lazy writing and a general feeling of “well, we did well enough.” As a reboot – or a rebirth — Catalyst doesn’t capture the essence of Mirror’s Edge in the way Doom just did for Bethesda. Instead, it’s more like the Andrew Garfield Amazing Spider-Man reboot — utterly forgettable. 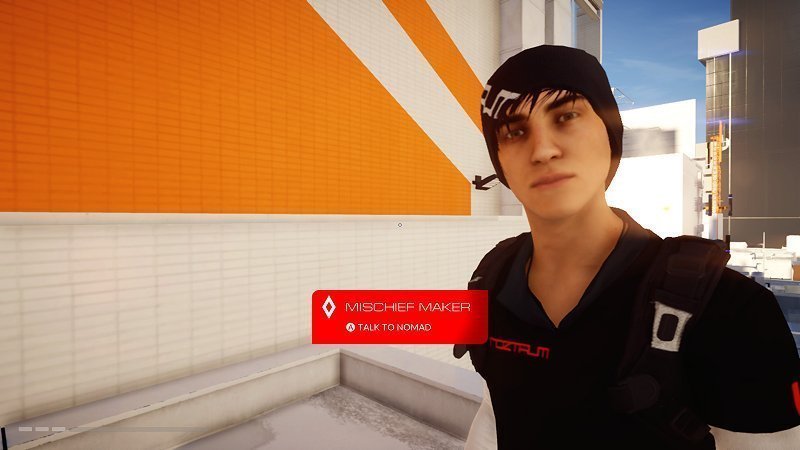 While refinements have largely rid Catalyst of trial-and-error gameplay, the notion rears its ugly head during the final story mission. Said exercise is one of pure frustration, with random bullsh*t coming out of the woodwork to strike Faith down in ridiculous ways. Often you won’t even overcome the challenge that’s presented, merely gaining ground from a random checkpoint as if the game feels sorry for you. It’s jarring and unfortunate, especially when the rest of the experience feels pretty polished. That said, my playthrough on Xbox One had five instances where Glass would simply black out. Quite literally, everything went back apart from one objective marker. I couldn’t see where I was running and had to revert to a previous checkpoint to emerge from the darkness anew. Before then, I thought nothing could be worse than stopping to turn off a fan or pull down a barricade.

Mirror’s Edge: Catalyst is a curious beast. It’s more accessible and enjoyable than Mirror’s Edge, but alarmingly, there’s nothing spectacular nor overly memorable about it. Prettiness aside, it’s still short, has a sparse plot and doesn’t get you excited through its gameplay. It’s fun in spurts, but now I’m finished with the main plot and most of the character-driven side-missions, there’s no desire to go back for more. If you enjoyed the original – and don’t mind a bit of lazy rewriting – Catalyst is a must-have. For the rest of us, it’s one to consider in a bargain bin or after its eventual inclusion into EA Access.

Update: Non-committal marketing of Mirror’s Edge: Catalyst has lead Stevivor to believe it was a prequel to 2008’s Mirror’s Edge, but we now understand it is a reboot, plain and simple. We have amended our review to reflect this.

Mirror’s Edge: Catalyst was reviewed using a promotional code on Xbox One, as provided by the publisher. 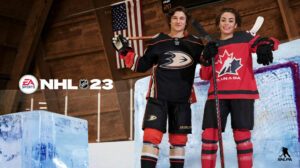