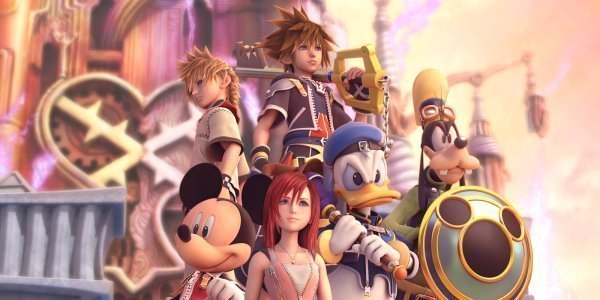 It’s been eleven years since the original release of the blockbuster PS2 hit, Kingdom Hearts. Even after all this time, it’s still one of the most engaging, colourful and memorable titles to for gamers to experience. Now, with the release of Kingdom Hearts 1.5 HD Remix for PS3, gamers can now experience it once again.

As an introduction to the series for newcomers who were intrigued by the recent Kingdom Hearts III trailer or fans who want relive the classic titles, Kingdom Hearts 1.5 HD Remix is ideal.

In true Kingdom Hearts style you play as Sora, the Keyblade master who’s looking for his friends. During he’s adventure he’s accompanied by Disney veterans Donald Duck and Goofy who are also looking for King Mickey. Over the course of the games, you will meet many familiar characters as you visit various Disney Worlds fighting off the series’ main enemy, the Heartless.

The remastered titles have never looked better. The styled approach to the franchise has worked very much in its favour, though Square Enix admittedly has done some additional work to ensure the titles look the best they can. From updated textures to models there has been an extra layer of polish that is not often seen in HD remasters in this current generation.

The visual aspect is the most obvious and noticeable update across these legacy titles. Square Enix have also taken the opportunity to remaster the soundtrack with fully orchestrated tracks for Kingdom Hearts Final Mix as well as add some UI and gameplay tweaks.  Camera improvements and the context sensitive action button brings the title more in line with Kingdom Hearts II’s improved mechanics making for a much more streamlined and enjoyable experience.

Of all the titles, the least changed is Kingdom Hearts Re:Chain of Memories. The card-based combat system returns in all its controversial glory. Those who’ve had the chance to play it before will most likely return for nostalgic reasons. Newcomers however will benefit from playing it, as it’s a direct sequel to the first title and answers many questions that go unanswered in Kingdom Hearts II. It is well worth the play through for that alone with introduction of Organisation XIII.

The most disappointing member of the collection is no doubt Kingdom Hearts 358/2 Days. Originally a full 3D game (admittedly with some frustratingly repetitive gameplay), 358/2 Days brought a much darker story and incredible character growth system to the series. In the 1.5 Remix, the game has been reduced to a collection of HD cutscenes and pages of text to fill in the gaps of the story. A full remake would have been a worthwhile addition to the collection.