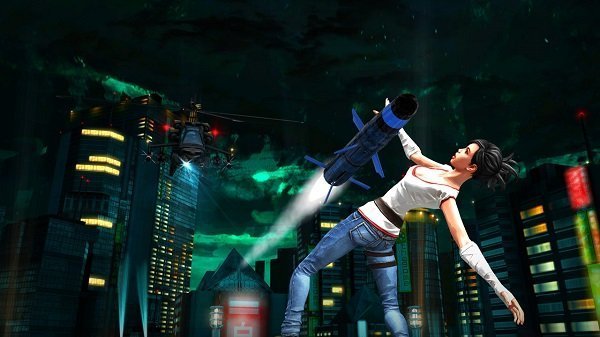 Kickbeat: Special Edition is much more about the beat than the kick, wrapping a bombastic layer of kung fu and nu metal around a simple rhythm game. It most certainly is not a fighting game; its combat is just window dressing for matching button presses to the beat.

As a rhythm game, Kickbeat is rock-solid but far from spectacular. A circular arena replaces the traditional note track with your playing character at the centre, fending off waves of slowly approaching goons to the beat of the music. Occasionally you will have hold a button or press two (or three, which forced me to hold the controller a different way when I encountered it after five hours of play) at once, but the colour of an enemy telegraphs their style; red attack together, blue attack rapidly and yellow on their lonesome. The mechanics are simple but refined, timing windows are precise and you are given guidance to whether you are early or late if you miss perfect timing, but usually you’ll be able to tell by the sound effects falling slightly off the beat. The rest of Kickbeat is vanilla rhythm game, you have combos, multipliers, a ‘star power’ equivalent that is earned with good performances and a couple of powerups that are used to save yourself from trouble. 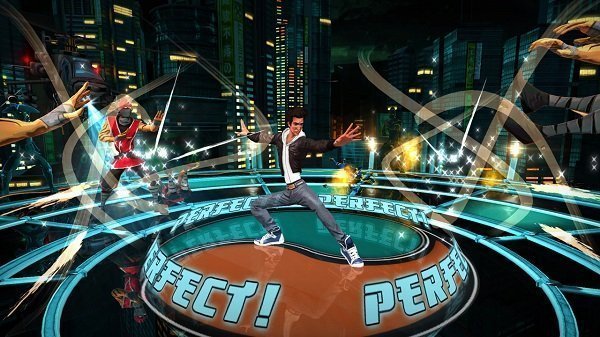 The base game is simple, and the combat theme means you can’t drown under an overwhelming spree of notes, goons can only attack as fast as punches and kicks can be animated. Once you get into a groove the game becomes easy, but luckily there are kinks to knock you out of that timing. The biggest kink is orbs, items that appear over certain enemies that can be claimed by double tapping the button they represent. Adding quick double taps to slow beats is nice and easy but sneaking them in to fast paced combos can knock your timing off, and once you lose the beat it is hard to get back on without taking multiple blows. Most of the orbs are big score bonuses with an occasional health pickup or powerup.

It adds up to a reasonable challenge, although one that I feel could be mastered within a week of play. My biggest struggle was when the game changed the track it was taking the beat from, say from bass to vocals or guitar. It can take a moment to pick up the new beat, and in that time you can take plenty of damage, particularly on the harder difficulties where health pick ups are removed from the game. This issue is solved by repetition and practice, but it did make initial progress frustrating on the hard difficulty. The game also suffered on higher difficulty for the canned combat animations, if you attack too early you have to wait for the animation to finish before getting another chance, in that time you miss your window and take an unnecessary hit. These issues don’t hurt you when you have some experience under your belt, but it frustrates the learning process. 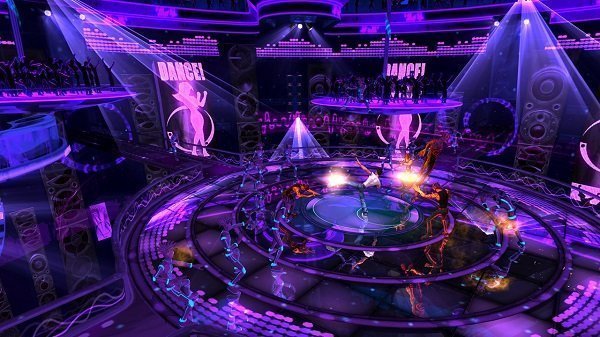 Like most rhythm games, Kickbeat will live or die by how much you enjoy the soundtrack. I really enjoyed the electronic tracks (enV’s Electronic Super Joy soundtrack is featured and were consistently my favourite tracks) and the rap tracks worked surprisingly well. The rest is nu-metal, highlighted by Marilyn Manson, P.O.D, Rob Zombie and Papa Roach. Some of the vocals were a long way from my taste and some of the lyrics laughable; repeating some of these tracks in hard mode became an exercise in aural pain. Unfortunately for Xbox One owners (on which this version was reviewed) one of the key features from the Steam and PS3/Vita editions, a ‘play your own songs’ mode, is missing due to the inability to copy your own music to the system. I believe the PS4 and Wii U versions will also suffer this limitation.

The story mode will entertain you for a while, told in nice hand drawn animated cutscenes. The voice acting and plot are a bit cheesy but it doesn’t take itself very seriously and I had some laugh out loud moments. There are survival and free play modes for the dedicated and a split screen option that is unfortunately just a score battle, there is no interaction between the two players.

Kickbeat is entertaining, but doesn’t do enough with the fighting part of the name, in fact it actively hinders gameplay at higher level play. It does provide a platform for some nice visuals and entertaining animations, but there isn’t enough to keep you coming back. I enjoyed my time with Kickbeat (my neck is now sore from bobbing my head with the beat for a couple of days), but I don’t feel the inclination to go back and chase high scores, to get five stars or master the top difficulty levels. Kickbeat is worth a long look for rhythm fans, it is a very competent rhythm game but lacks the touch of Harmonix titles like Rock Band Blitz.