Most of you probably would gravitate towards the SingStar franchise on PlayStation if we’re talking karaoke games, but not me – it’s all about Lips on Xbox 360. Regardless of platform, the genre was in its prime on last-gen consoles, with more offerings from the big two than you could shake a USB microphone at. Needless to say, when Ubisoft announced Just Sing — made by the same team that did Lips — I was over the moon.

Sadly, Just Sing quite a bit different than Lips.

This is 2016, so you know what that means – we can’t stop looking at our damn phones. We live for the selfie. So, in addition to making your smartphone your microphone, it’s also your personal video-taking device. Just Sing does away with the original music video presentation used in the likes of SingStar and Lips to make it all about you and your friends.

This is what Ubisoft expects will happen when you play.

I’m sure as hell not going to be sharing any videos from my big Just Sing session the other night. In a poorly lit room and alcohol-free (‘cause the night before surely wasn’t), I made my husband sit down with me to give it a whirl. As we downloaded the app, seamlessly connected to the game and started queuing up songs, I was excited as all hell. More than forty songs are available right off the bat, and without the pay-per-play restrictions of Microsoft’s failed Karaoke app or even Ubisoft’s own Just Dance of late. It was just us, our microphones and the songs.

It was then that things got horrific. Rather than seeing the video for Shawn Mendes’ “Stitches”, my partner and I were treated to a grainy, slightly depressing view of our half-packed apartment (we’re moving; it’s slightly unrelated, but kind of need-to-know). Periodically, the view would change to either he or I; regardless of who was then on the TV, it was a matter of that person recoiling in disgust over what I call “wrong camera display.” You know – those times when you open your phone’s camera to take a photo of something ahead of you, only to freak out when you’re instead getting a close-up of the underside of your chin?

Yeah. That. We weren’t really feeling like adding various filters into the mix, though it’s relatively simple to via the app. 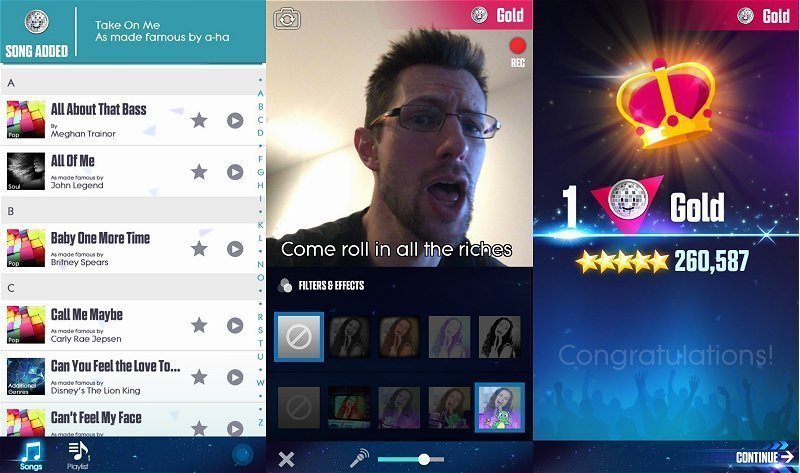 The picture above is seriously the only one I’d ever consider sharing. You’re welcome?

If you don’t feel like singing with your arm fully outstretched (seriously, look at the top picture), you can turn off your phone’s camera, and even the mic. You’d do the first if you hate the look of yourself, or the second because you’d rather just lip-synch to the music that’s being played. You’re also able to flip to your front-facing camera; my hubby did that and filmed the coffee table during A-ha’s “Take on Me”. This is all fair enough, I guess — but with cameras off, you’re basically just looking at text floating by on a screen. You might as well buy a real karaoke machine, or just head to a nearby lounge.

My point is that the above video will only be replicated if you’ve got a bunch of friends over and you’re already half-lit. And plan on drinking the entire time you’re singing. For the record, I had friends over playing the likes of Lips all the damn time.

That aside, the tech is spot on. The left side of your TV will show you coloured bars for those who’ve joined up – up to four players, locally – and pitch detection is as solid as it was on Lips, so near perfection. I tested detection on both my phone and via the PlayStation camera and didn’t really notice any big discrepancies. You’re also able to connect a USB microphone to the game, but I didn’t have one handy to put through its paces.

Just Sing isn’t bad; it’s a good karaoke game marred by presentation problems, or, a half-decent party title. Take your pick, depending on what you’re looking to get out of it. Either way, anyone wanting to relive their favourite times from similar franchises will find this a beast of an entirely different nature.

Just Sing was reviewed using a promotional code on PS4, as provided by the publisher.