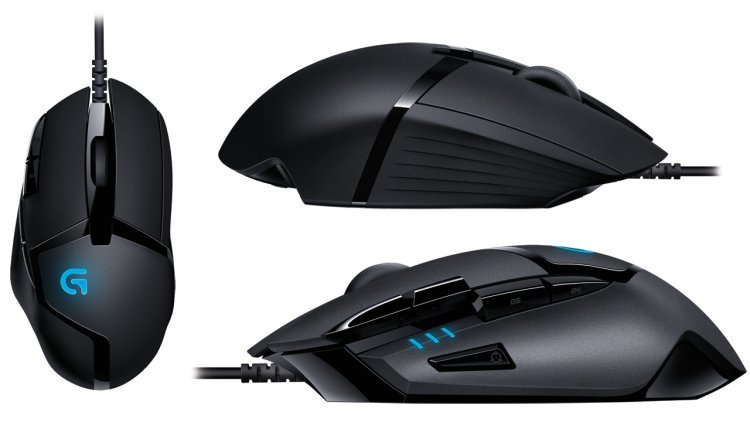 The Hyperion Fury Do or Die Part II the Revenge of Logitech G402 mouse is advertised as the fastest gaming mouse. This is measured in inches per second, and I have no idea what that is referring to without looking it up. As a special part of reviewing this, I refused to look it up because I wanted to see if I could feel a difference between it and it’s brother, the Proteus Core You Need More Minerals G502.

From what I can tell, there is almost none. Then again, I’m not a pro-gamer, but then again, there’s a good chance you’re not either.

I feel bad because every time I look at the G402 I wish it had taken some fashion tips from the G502. I’m not sure if it’s because the G502 is deliberately styled in a cool way that’s appealing to the dormant teenage boy inside me, or because its counterpart is just so lacking. It’s black all over, the only colour deviation being the blue light of the ‘G’ symbol and the ‘gills’ near where the thumb rests, indicating what preset configurations you have on.

Don’t get me wrong though – it’s usual Logitech fare. It’s still sleek and gorgeous in its own right, with that taste of ‘the future is now’ radiating from it. I just can’t get past the stylings of the G502 to appreciate it.

Kind of feel like at this point in the review I could copy paste whatever I wrote for the G502, barring the actual shape of the mouse. It’s far more rounded with a higher base for the hand to rest on more casually. This makes it more comfortable for longer sessions, but I’m not quite sure if that’s the feel I’d want from a mouse that is supposed to be the specialty mouse for the FPS genre. 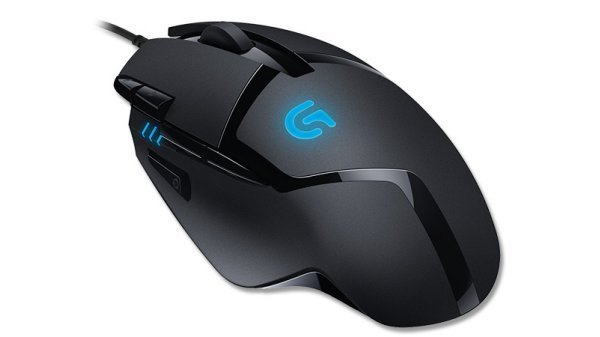 Buttons to change customised presets, as well as the ‘forward/back’ and, what I like to call, the Sniping Button (when you hold it down, it basically drops the DPI to a tiny amount), are all perfectly positioned… for me, anyway. While I believe no mouse will ever truly challenge a controller in terms of button placement and ease of use, the G402 comes pretty god damn close. They’re all well within the reach of your fingertips, and the action on them is beautiful – be confident, not hard.

If I am going to complain about one thing, and I always try to, I don’t like the cord. Maybe I’m getting too used to the majesty of a fabric cord, but I find the simple plastic less flexible and just less enjoyable to look at. It might not detract too much (if at all) to the product, but it just doesn’t add anything either.

I have to do a shout out to Logitech’s software at this point — it’s easy to use, completely logical, and even an idiot like me can easily find my way around it. Even if you don’t ever intend on using the extras it can do, it’s kind of hard to pass up when the ability to auto-detect the game you’re playing and adjust itself accordingly is hard to avoid using.

What The Hyperion Super Street Fighter G402 Is For

Apparently it’s for the FPS genre. I played Counter-Strike with it, and a little bit of Titanfall, so not exactly fantastic games to try it out with, as the former I have almost no skill for, and the latter doesn’t require the most precise aiming.

Writer, gamer, lover, viking, but not always in that order.