The Dead Rising series has never really appealed to me in the past. Its main turnoff was the time limit mechanic, providing only a scant a few hours to complete the campaign before your time ran out. I didn’t like the pressure that was put on you to try and get through everything, as I generally like to explore what’s on offer, also messing around with different gameplay mechanics. With a time limit in place, I felt forced to do things as quickly as possible. While hardcore Dead Rising fans might disagree, the lack of timer in Dead Rising 4 means that forced tension is now gone, a decided change for the better. It takes away manufactured constraints and, in doing so, allows for free play in a proper sandbox environment. With that simple change, Dead Rising 4 is the most fun I’ve ever had with the series; still, for a game that’s filled to the brim with zombies to kill, it still feels empty at times.

In Dead Rising 4 we see the return of the franchise’s original protagonist, Frank West, after a series of events lead him back to the zombie-infested town of Willamette over Christmas. Things kick off with a brief prologue before you find yourself in different-yet-not Willamette shopping mall, the first hub of many open areas you’ll visit. To help Frank deal with hordes of zombies, environments are generously scattered with various items and weapons. Your mission, really? Cause chaos.

You’ll also find blueprints around the world, all of which allow you to combine weapons and items together to create crazy, over-the-top super weapons. Some of these can be quite impractical but are fun to play around with, while others can grant you a huge damage bonus as you fight your way through waves of the undead. The combat is quite simple with Frank being able to do quick attacks, sweeping attacks to clear the area around him, throw explosives, or use firearms. While you’re smashing away at the undead the combo counter ticks upwards and after certain limits you’ll be able to unleash a powerful melee attack.

The majority of the zombies you’ll come across are the slow-moving stereotypical fodder of Romero films. Individually, they aren’t hard to deal with, but when out in force they can chip away at your health, gradually surrounding and overwhelming. Despite this, I didn’t die at all at any point in my playthrough. Even though Dead Rising 4 does a great job early on of making you think you’ve encountered a large group of zombies, it amps it way up as time goes by. Near its conclusion, things get to the point where hundreds of the undead are on the screen at once. Even better, this also happens without any impact to the game’s framerate performance.

As you progress, you’ll be trying to level up Frank to unlock extra perks. Gaining experience can be done by killing zombies, completing missions or finding collectibles. This is the biggest problem with Dead Rising 4: apart from the main story, there just isn’t much else to do that is compelling. You’ll run into the occasional side event, but these are generally very quick to do and they don’t vary much. Capcom Vancouver has created this huge sandbox for you to explore, but sadly for the most of it you’re just slashing your way through zombies to try and level up. Needless to say, that becomes a grind. and fast.

The tone of Dead Rising 4 is done well as it doesn’t take itself seriously. There’s a camera in the game which you can use to capture photos of your destruction along the way. It’s also a mechanic used in missions to detect various items. It’s the simple things like adding a selfie mode to the camera which makes the humour stand out even more. Frank West helps things along as a likeable character that provides many funny moments. At times, I found myself actually laughing out loud along with his antics. If it’s not the story and what Frank’s up to, it’ll be the ridiculous weapons that you’ll come across that’ll make you chuckle to yourself. 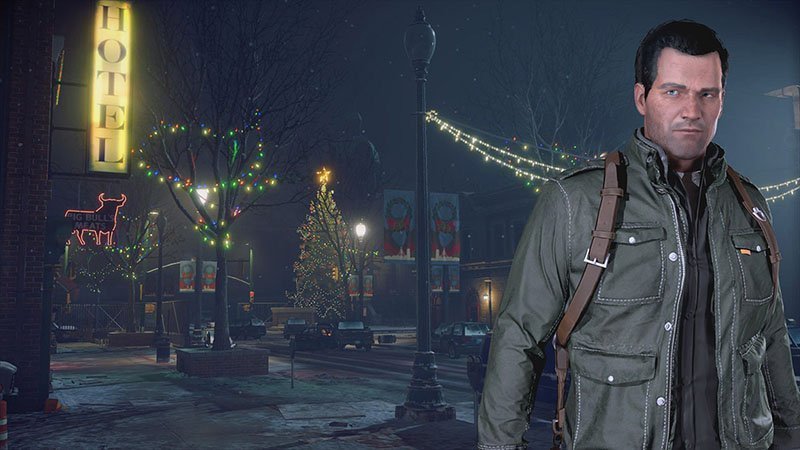 For those wanting to dive into multiplayer, it’s unfortunately separate from the main event this time around. You can have others join and play together in scenarios as you all fight to survive from the waves of zombies coming your way. If you’re dead set against the removal of a timer, this mode’s also for you as it’s back in, and in force.

Dead Rising 4 is a lot of fun. The removal of the timer might not bode well with fans of the series, but it does allow a sense of freedom to move within the game at a player’s own accord. That all said, there just isn’t enough to keep you engaged apart from the main storyline; killing zombies with crazy theatrical weapons is fun, but after a while it just becomes too much of a grind.

Dead Rising 4 was reviewed using a promotional code on Xbox One as provided by the publisher. Click here to learn more about Stevivor’s scoring scale.