In the wake of THQ’s collapse, Nordic Games has picked up the Darksiders franchise. Ahead of a proper new release, the publisher has offered up Darksiders II: Deathinitive Edition. Despite the atrocious name, this re-release is a great way for gamers to experience the immersive Persia-meets–Zelda experience they might have missed on last-gen.

Darksiders II runs parallel with the events of the original game and revolves around Horseman of the Apocalypse Death. Our ant-protagonist is fighting to clear the name of his brother and fellow Horseman, War. Death believes that by resurrecting humanity, War’s supposed crimes will be erased. Of course, bringing about the recreation of an entire species is easier said than done and like many protagonists before him, Death finds himself embroiled in the woes and worries of every creature he encounters. At every turn he is greeted by the inevitable tit-for-tat that goes hand in hand with the open world, quest driven game.

In Darksiders, players took control of War, the first Horseman, in an effort to prove himself innocent of the accusation that he caused the Apocalypse. The game took place largely on a desolate and lifeless Earth with humans long extinct. It was a somewhat solitary experience, even with your ever-present Watcher, Vulgrim the Merchant and Sammael. Other than those three characters, War encountered few other NPCs. 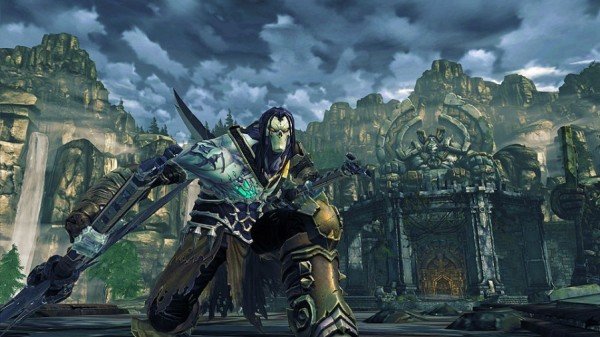 In Darksiders II, the worlds Death visits are positively brimming with life; NPCs are constantly about, wanting a chat or to send you on a quest. Environments are littered with trees and plants and of course, who could forget enemies. Most characters Death meets have something meaningful to say, be it additional information about the world or it’s history, a new quest, the opportunity to buy and sell items or to teach Death some new moves. From the get go, if you’re a completionist like me, you’re going to be seeking out every NPC to extract all the nuggets of additional content. In doing so I quickly discovered that Darksiders II is absolutely enormous.

Aside from the main story quests, there are a plethora of pursuits for Death to accomplish. A handy addition to the game is the quest log within the map screen. This allows players to keep track of the primary and all the secondary missions that are active at any given time. And while the primary quest line is fun and engaging, it’s all too easy to get caught up in exploring the game world to complete just one more side quest. I found myself constantly off exploring the world looking for “one more stone” or simply just seeing what I could find. It’s this curiosity and sense of exploration that Darksiders II evokes in a player that truly makes it shine.

Exploration of the gigantic game world is assisted from the beginning by the availability of Death’s horse, Despair. It’s a real joy to be able to jump onto your horse within the opening few seconds of the game and quickly set off on your adventure. It lends a sense of urgency to Death’s quest and in practical terms ensures that the player isn’t cursing the size of the environments or lamenting the lack of faster travel options. 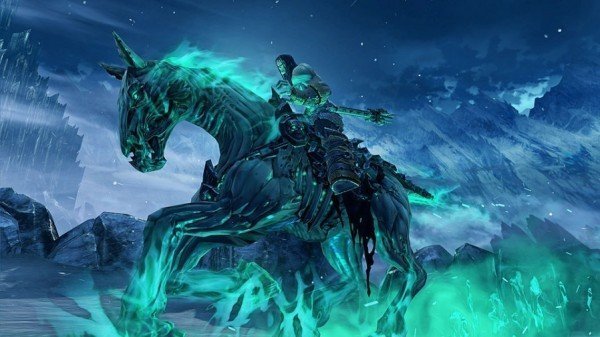 In Darksiders, players could fast travel between certain locations by visiting Vulgrim and traversing the secret Serpent Holes. Darksiders II does away with this system and instead simply allows Death to fast travel to any major location — provided it’s previously been visited — via the map. What’s even better is that if while playing through one of myriad dungeons in the game, you happen to be running short on supplies, you can fast travel to the nearest store and leave behind a fast travel marker within the dungeon. This allows you to leave, stock up and return to the point you left from without needless and frustrating back tracking.

Streamlined fast travel isn’t the only innovation found within Darksiders II compared to its big brother. Darksiders II features an in-depth and compelling loot system. Now, instead of simply being equipped with one main weapon and secondary weapons, a huge variety of weapons and armour are available to Death. His main weapons are dual scythes, with secondary weapons including giant hammers, axes or glaives and smaller bucklers and claws, providing a choice between fast and slow secondary damage.

With every chest opened and enemy killed, there is a chance that a new weapon or piece of armour will be discovered with the promise of even more carnage.  Each weapon and piece of armour comes with its own set of stats, allowing you to endlessly upgrade Death and customise his innate abilities however you like. Death can only carry a finite number of items, but have no fear as the merchants spread throughout the worlds will happily purchase anything you no longer want or need. 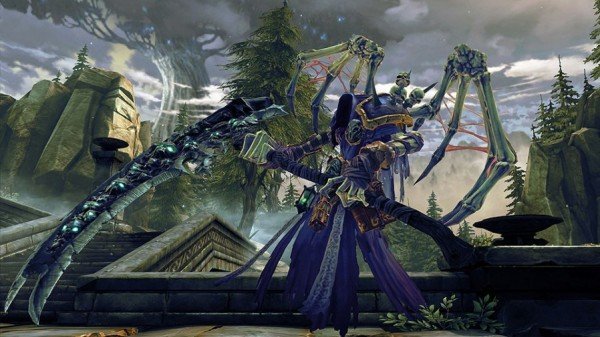 War was no slouch when it came to exploring, combat and acrobatics, but Death leaves him far behind. He’s faster and feels lighter on his feet when exploring the world and in combat he seems incredibly powerful and destructive. Wall running, climbing and jumping all return from Darksiders but here they feel fresh and different, simply due to the difference between War and Death. Exploring a dungeon often exudes a Prince of Persia feel in Darksiders II rather than the very Legend of Zelda style play of the first game.

Combat, while largely unchanged, similarly feels fresh and fun thanks to the differences between protagonists. Death zips around the battlefield, dodging and flipping in ways that War never could, making him more nimble and deadly than his brother. As before, the combat isn’t simply a mash fest, although you could get quite far if you were determined to play that way. Death gradually unlocks moves and combos over time, increasing his death-dealing repertoire. If you dedicate the time to learning the intricacies and complexities of the combat, a deep and rewarding system presents itself, providing many opportunities for the player to really tear enemies apart while largely avoiding damage to themselves all together.

Boss fights are particularly good fun in Darksiders II. Most, if not all, require strategy and puzzle solving skills as well as a mastery of combat. Playing on Apocalyptic difficulty gives a real challenge to even the most skilled player, while lower difficulties, while being less of a challenge are still fun, especially for those new to the series or genre. 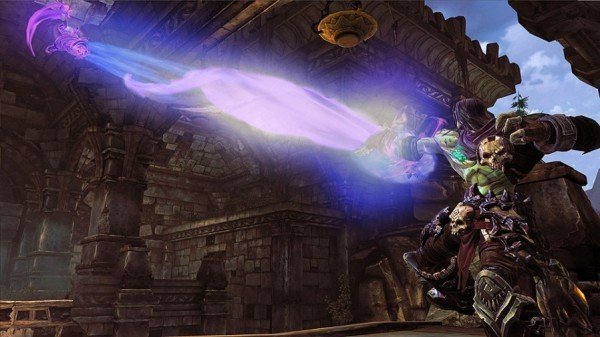 Darksiders II will provide many hours of entertainment be it to casual or hardcore gamers alike. Finishing the main story alone will take between 15-30 hours depending on your skill level and how easily you are drawn into side quests and the collectibles. Completing the game 100% is going to take considerably longer, but if you enjoy the game and the Metroid-style exploration found within collecting every chest, stone, rune, coin, shard and page, it will be a joy rather than a burden.

For those competitive types, the addition of leaderboards may light a fire within you. Stats like biggest combo (of at the time of beginning this review I was ranked 6th in the world and of which I fully expect to have  slipped off the bottom of the list by the time I finish), most damage dealt, fastest completion time etc adds an extra incentive for another playthrough, or another hour or just one more dungeon.

While Darksiders II — and, in turn, the Deathinitive Edition — is a fantastic game it’s not without a few flaws. Framerate remains at a very last-gen 30fps in this current-gen edition, and the loading screens and stuttering we experienced in the original release remain in this new one.

It’s also worth noting that the game is essentially one big set of fetch quests. If you’ve ever played a Legend of Zelda game, then you’ll know what to expect. Death explores a dungeon and is required to bring three items to a location to unlock the next dungeon. While this may sound repetitive or even boring, it’s the way in which the player is required to collect these items that make the quests compelling. Constantly levelling up, acquiring new gadgets, engaging combat and epic boss fights help ensure interest and enjoyment levels are kept high for the duration.

Darksiders II: Deathinitive Edition isn’t for those who’ve played the original release, but its a great way for those who missed out to get on board before Nordic Games makes some original content. Now that this is out of the way, bring that on, Nordic — we’ve still got two Horsemen to meet.

Darksiders II: Deathinitive Edition was reviewed using a promotional code on Xbox One, as provided by the publisher. This review was based upon our original review.