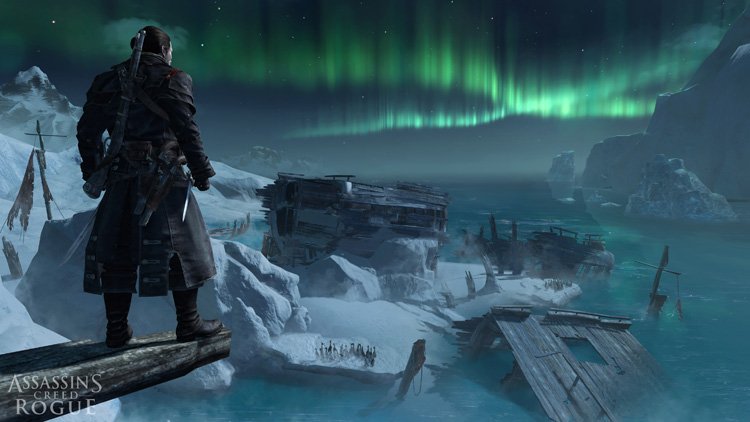 The end of the year has arrived, so it’s time for another Assassin’s Creed on PS3 and Xbox 360 – but with a twist. Unlike last year’s Black Flag, which released across last- and current-gen platforms, 2014 gives us two distinct and very different flavours of Creed: the current-gen Unity and the last-gen Assassin’s Creed: Rogue. While Unity deals with the French Revolution, Rogue tells a more personal tale revolving around newcomer to the franchise, Shay Cormac.

Starting as a member of the Assassin’s Brotherhood, Shay is cocky and headstrong in his work, with a lovely Irish lilt to set him apart from the previous game’s heroes. As the game’s early sequences wear on, Shay finds himself more and more ill at ease with the work of an Assassin, until a catastrophic event pushes him over the edge. After leaving the Brotherhood behind, Shay finds his new calling amongst his former enemies – the Templar Order. It’s a unique tale among the Creed series, and acts as a natural evolution of the previous games. Over time the stories of the Assassins and Templars have become more and more intertwined within the series’ mythos, with the Kenway family alone seeming to switch sides every generation. Watching a protagonist cross to the ‘other side’ not only gives the game new story terrain to explore but it lets us look deeper into the inner workings of the Templars, something that has always been shadowy and unexplained to date.

Gameplay-wise, Rogue takes a lot of cues from previous titles Black Flag and Assassin’s Creed III. Ship exploration and combat make a welcome return, as do some familiar faces and places from both of the above games. You’ll continue to hunt, craft and upgrade your way through this title, which may feel somewhat of a rehash to established players of the franchise. While it all looks a little different, many of your upgrades, weapons and actions are functionally the same as previous iterations. Edward Kenway’s blowpipe darts become Shay’s air rifle ammunition, Connor’s rope darts make another appearance (though thankfully earlier in the game than they did for Edward), the outside-the-Animus segments are in the same environment as Black Flag’s and the fleet mini-game returns to your captain’s cabin with a fresh coat of paint. 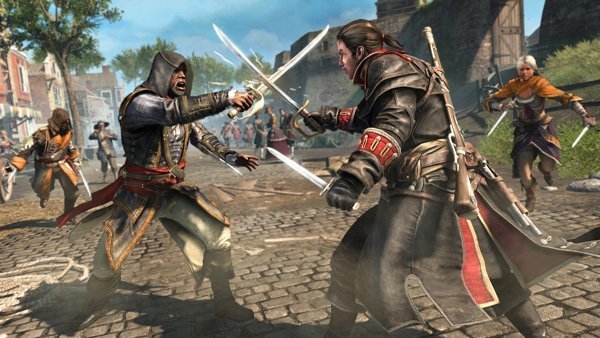 That’s not to say any of this is a BAD thing. All of these elements were enjoyable the first time, and with a new set of locations and tweaks, they’re fun once more. Whilst Unity has been built newly from the ground up and features all-new controls, Rogue is built on the foundation of all the games before it. The engine has been optimised more than ever before, and the control scheme at this point is so engrained that you can pick up the game and immediately know what to do… unless you’ve already started to train your brain with Unity. Ubisoft know that this game isn’t their flagship – excuse the pun – Creed game this year, so it’s not sparkling-new from top to bottom. Nevertheless, it IS a fun ride.

That’s not to say it’s perfect. Much like every game before it to some degree, Rogue has one key issue – wonky parkour controls. It’s ironic to think that the game’s most defining and unique mechanic is also its most frustrating, but there you have it. Like Ezio, Connor and Edward before him, Shay will often misinterpret your direction of ‘jump up to that next ledge’ as ‘please, throw yourself off this building and die so that I have to go back to the checkpoint. Again.’ Rogue features an all-new wrinkle to this dilemma in that icy waters will quickly freeze you to death if you go for too long a swim — if, say, Mr. Cormac decides to swan-dive off a waterlogged shipwreck JUST BEFORE a synchronisation point rather than climb up to it. I may be speaking from experience. In truth, the parkour system is as good as it can be within this engine. Unity has shown that a complete overhaul can improve things, but it’s unrealistic to expect those improvements to feed backwards into this game.

Beyond parkour, the only true frustration is Rogue’s new ‘stalker’ mechanic. Once he leaves the Assassins, Shay will occasionally be attacked by hidden agents of the Brotherhood, as indicated by a whispering sound effect and a compass-like indicator in his Eagle Vision that only reveals them at close range. This mechanic is primarily used in gang takeover missions to hide the murder-target captains, but is also randomly dropped into the overall game world. While this kind of thing is fine when you’re expecting to encounter it, having somebody randomly drop on my head from a rooftop while I’m between missions is just rude. Finding and executing these stalkers does not offer any real reward, so they act as more of a nuisance than anything else. 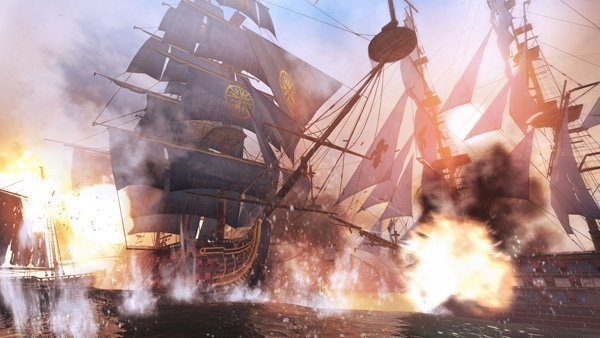 The true winner in Rogue is its story. The game’s cast blends characters from ACIII and Black Flag to truly mesh their stories together, and offer resolution for what happened to many characters beyond the scope of their respective games, and helps inform the world of Shay’s story. The tale of a conflicted man being swayed to switch sides in the great Assassin-Templar dispute is intriguing, and Shay’s evolution is suitably layered and subtle. From the first mission you can tell he’s not your typical Assassin, so his shifting allegiance makes sense for him. If this same journey had been applied to a character like Ezio or even Edward, it wouldn’t have fit. Seeing Assassins presented as the enemy casts the game in a much different light, and humanises the Templars at the same time. It also makes sense within the meta-story of the world outside the Animus, as the last few games have been presented as entertainment products sold by the Templar-controlled Abstergo Entertainment. Presenting the story of a heroic Templar is an obvious choice from this standpoint.

All in all, the game is a nice resolution to the age of Assassin’s Creed on the PS3 and Xbox 360, should the series not return for another side-title. Turning the game’s alignment on its head is a nice twist, and gives some well-established mechanics a fresh gloss to keep you interested – not to mention possibly giving you your last instalment of boat-based Assassin life. If you’re holding out on Unity until it’s been more thoroughly debugged, give Assassin’s Creed: Rogue a stab (pun intended this time). It’s a strong title on its own merits and helps round out the franchise as a whole.

Assassin’s Creed: Rogue was reviewed using a purchased copy of the game on Xbox 360. 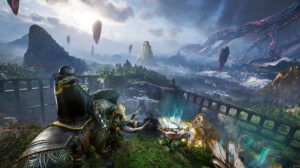