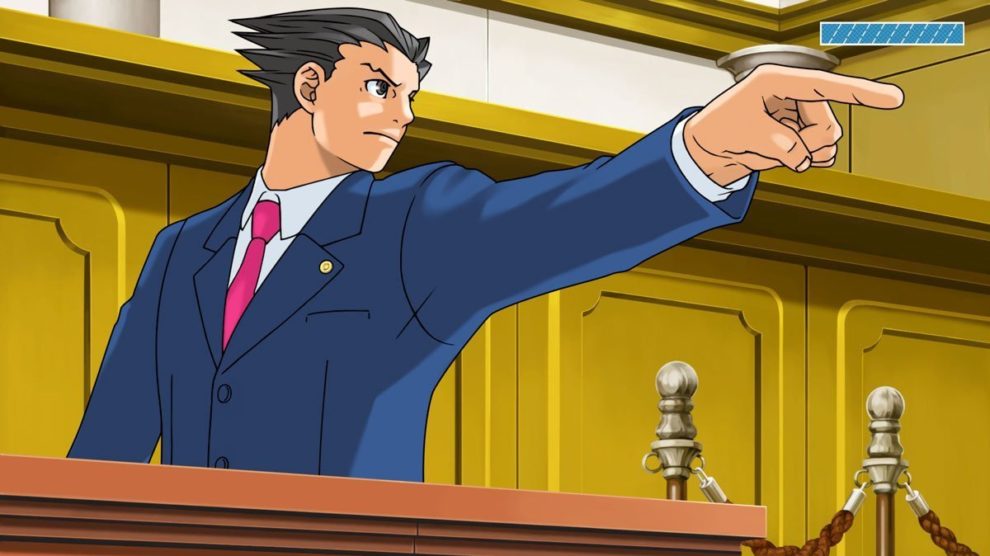 Want to feel old? We’re nearly ready to celebrate the 20th anniversary of the original Phoenix Wright Ace Attorney. Ahead of that milestone, Capcom’s decided to bring a bundle of the first three Ace Attorney games — Ace Attorney, Ace Attorney: Justice for All and Ace Attorney: Trials and Tribulations — to Windows PC via Steam, Xbox One, PS4 and Switch. Where supported, the former Gameboy Advanced and DS titles will run in glorious 4K.

If you’ve never played an Ace Attorney game, shame on you! Years before the success of modern visual novels like Dream Daddy or the quirky Danganronpa series, Ace Attorney was the reason I owned a 3DS… and I’d like to think it was more than just because I thought it hilarious that in-game characters were calling me Mr. Wright all the time. The original Ace Attorney had it all: a crazy premise, compelling and unforgettable characters and a simple gameplay loop perfectly suited for the train ride home.

As a new lawyer, Phoenix hones his craft spending his days in and out of court. Before a trial you’ll be tasked to scour through crime scenes, gathering evidence and speaking with those who may help or hinder you in trial. In the court, you’ll make use of all you’ve learned to contradict hostile witnesses who all should be thrown into jail for repeated counts of contempt of court. Always humourous, it should be noted that wannabe lawyers should not be using Ace Attorney to prep for a real-world job. 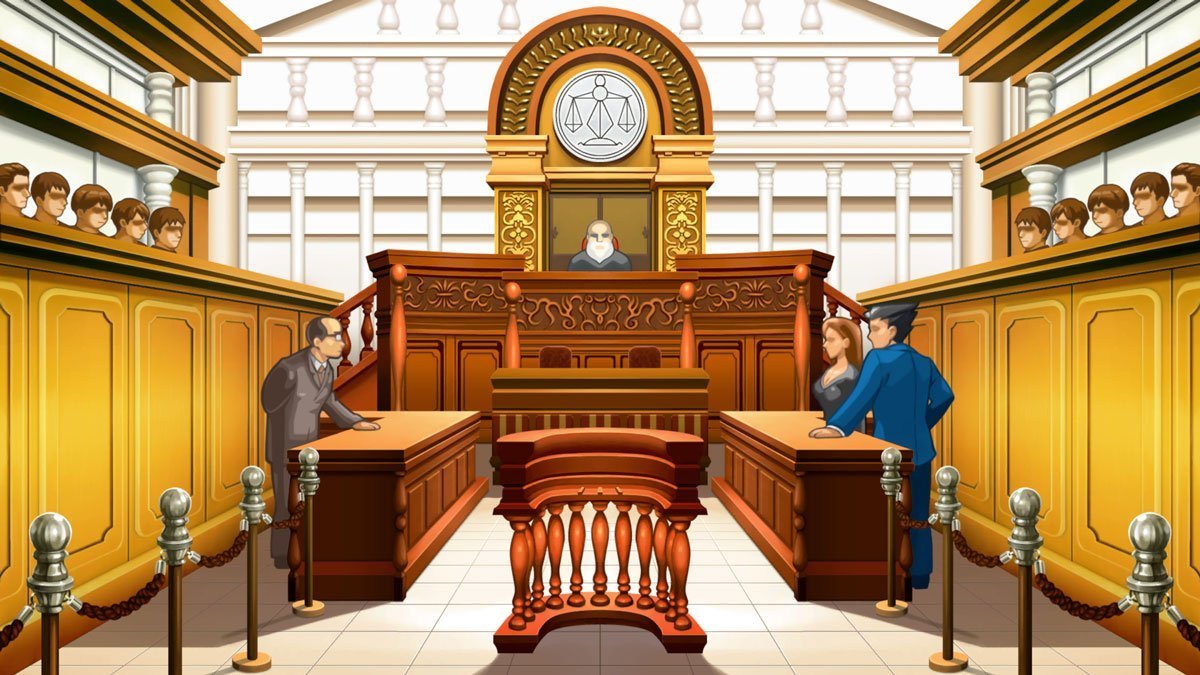 Far from the procedural-style gameplay seen in Ubisoft’s CSI games, Phoenix Wright is happier just having you along for the ride. Crimes are borderline ridiculous, and the testimony that some characters roll out for the cameras is just as insane. The franchise’s real fun comes from exploring and interacting with the world outside of court, then shifting out of a logical mindset to run with whatever comical actions play out in front of the judge. Even knowing what was about to happen, I found myself laughing out loud replaying the trilogy.

The way way I replayed cases on Xbox One X was drastically different than my original playthroughs on 3DS. On my console, I’d sit through an entire case as opposed to playing in spurts of no more than 25 minutes on a handheld. By sitting on the couch and taking the entire case in, I managed to perform a lot better too, as specifics were still fresh in my mind. There are also Achievements to be earned, and while that’s amazing on its own, a handful of them ask you to play in a way you mightn’t think to. The result is usually a treat of specialised, comical dialogue that I’m glad I got to experience this time around. I honestly didn’t know about the franchise’s ladder, step-ladder in-joke until now.

The biggest gripes I have with the bundle come from the fact three handheld titles have been gathered for play (largely, unless we’re talking Switch) on a UHD TV or monitor. While visuals look colourful and defined, they at times look simplistic — after all, it’s unlikely artists felt the need to detail an image for the event someone would eventually be looking at it in 4K. Similarly, menus and UI elements certainly suit the touchscreen of the 3DS (and again, the Switch), but not so much a TV-and-controller setup. Finally, the games’ midi soundtracks are quaint and reminder of just how old the titles are, but largely fall flat. It’s probably too much to ask, but voiceovers and a new soundtrack would have gone a long way… and if I’m designing some grand wish list, 3D character models as in Phoenix Wright Ace Attorney: Dual Destinies. 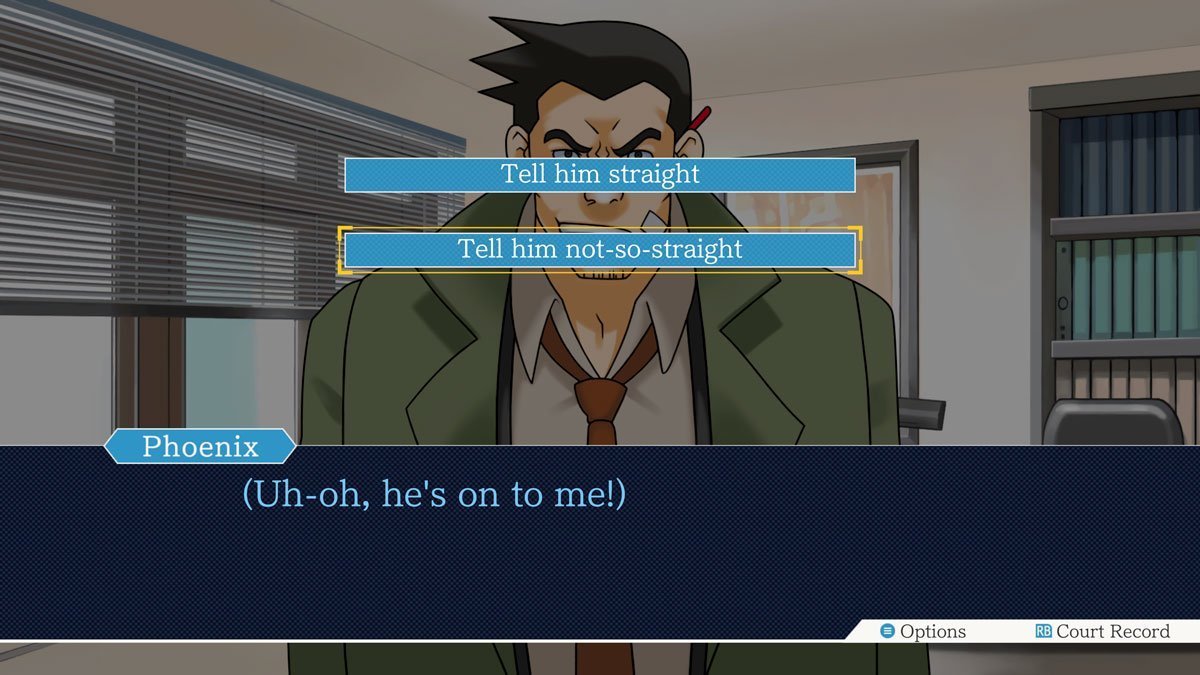 My wishlist aside, Capcom has delivered a handful of “improvements”: multiple save slots and a checkmark system that shows you the items you’ve already inspected at a crime scene. They’re welcome improvements, of course, but hardly anything to write home about.

This is an unofficial celebration of (nearly) 20 years of Phoenix Wright, and it’s a damn good one at that, even with its failings. You can hardly go wrong with the Granddaddy of the visual novel — a quirky, comical romp into the courtroom. Phoenix Wright Ace Attorney Trilogy is available today on Windows PC via Steam, Xbox One, PS4 and Switch.

Phoenix Wright Ace Attorney Trilogy was reviewed using a promotional code on Xbox One X, as provided by the publisher. Click here to learn more about Stevivor’s scoring scale.