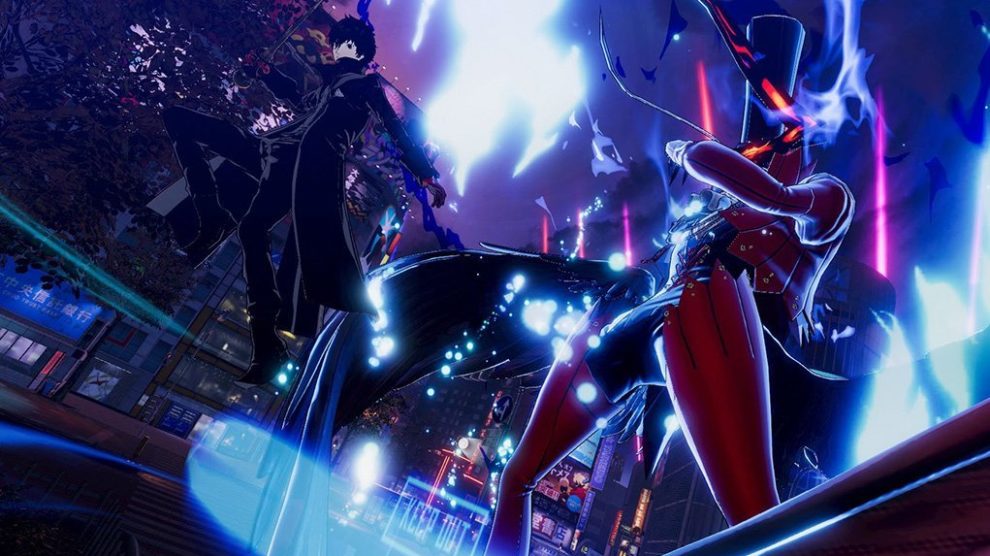 A great blend of Persona and the Musou genre.

Almost exactly four years ago, I got the chance to review one of the most stylish-looking JRPGs in a long while: Persona 5. Imagine my great delight when, without prompting, my editor dropped a PSN review code into my DMs, saying “I would imagine you’d be into this”.  The code was for Persona 5 Strikers, and he was right: I very much was into this.

Picking up immediately after the events of the original Persona 5 — so not Persona 5 Royal — Strikers puts you at the start of Joker and his friends’ summer holidays, as they plan a road trip to celebrate both the school break AND having just saved the entire world from an apocalyptic threat. Sadly it’s not to be, as a new mystery begins to unfold in Shibuya: more and more people are becoming unhealthily obsessed with the pop idol Alice Hiiragi, even to the point of ruining their relationships or going into debt to buy as much of her merchandise as possible. The Phantom Thieves find themselves drawn into an all-new crusade to right this wrong, protect the innocent and steal the hearts of those who would do them harm as they journey across Japan.

As follow-up title, Strikers occupies an interesting position. While several of the flagship Persona games have expanded into anthologies of titles – Persona 4 is the leader of the pack with the original game, the Golden remake, two fighting games, a DDR-style dancing game and two dungeon crawlers – these are more often treated as “here’s another genre if it tasted like Persona.” I expected much the same going into Strikers, due to the involvement of Koei Tecmo’s Omega Force. Best known for the Dynasty Warriors series and its many Warriors crossover titles, this team is responsible for the recent Hyrule Warriors Age of Calamity title, as well as past outings like Fire Emblem Warriors and the One Piece Pirate Warriors games.

All of these crossover titles share a similar premise: they are classic Musou-style games — named for the original series’ title in Japan — with a veneer of whichever property they cross over with. Elements from these source games are brought in to the title, such as Age of Calamity’s menus looking like the Sheikah tablet, but the core game is the same – run around a big map, take over bases and control points by beating a tough enemy and charge up and use your special attacks by mulching your way through fodder enemies. As such, I expected much the same from Persona 5 Strikers going in. I was wrong. 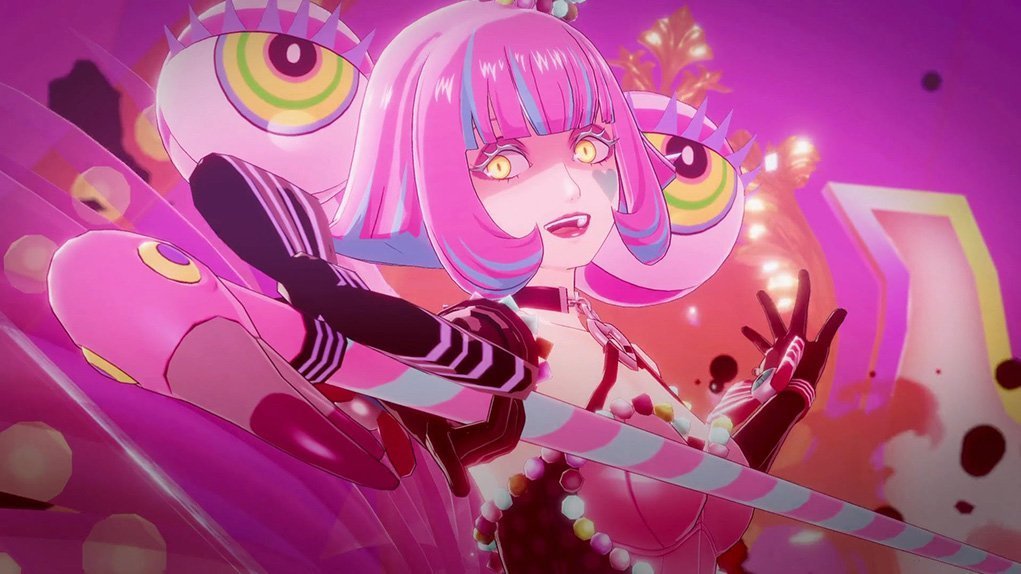 There’s a reason the game isn’t called Persona 5 Warriors, and that’s because this title takes a slightly different tack. Whereas the Warriors titles are usually entirely developed by Omega Force, Strikers was instead a collaboration between it and Atlus, maker of the Persona series. All in all, the game feels a lot more like Persona 5 than you’d expect. You’ll be exploring massive dungeons (known as Jails rather than Palaces this time around) full of wandering enemies; the idea is to use your thiefy sneakery to get the jump on enemies whenever possible. You can hide at corners, on chandeliers and other Jail-specific vantage points to do so, and being able to dive down on a Shadow, rip off its mask and begin the fight at an advantage always feels empowering.

Rather than a massive ongoing battle spread across the entire map as you would normally see in a Warriors title, you’ll be launched into a smaller-scale brawl on the map at each time you encounter an enemy, much like the original game. From here, combat truly feels like a real-time version of a Persona 5 battle. You can fight using your melee or ranged weapon or summon a Persona to dispense its own damage at the cost of Stamina Points (the Persona equivalent of mana) or a chunk of your own health. Enemy combatants are a mixture of known Personas within the world, who you will occasionally acquire in the course of combat, or generic Shadow enemies to fill out their ranks. All the combat attacks and status moves are pulled exactly from the Persona lexicon, so get ready to see those iconic and easy-to-remember skill names like Garu, Sukukaja and Marin Karin all over again!

The joy of cancelling out an enemy attack by casting a spell they’re weak to is only reinforced by the inclusion of Persona 5’s various follow-up attacks – 1 More for striking a specific weakness, Baton Passes when another member of your AI-controlled party wants to use a specific move, and the always-enjoyable All-Out Attack when you really have an enemy on the ropes. 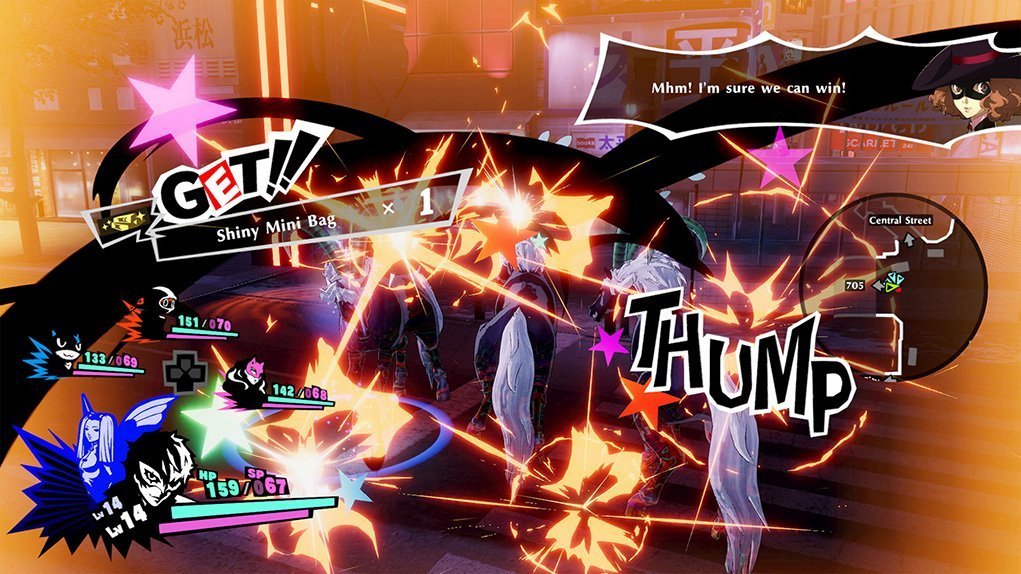 Of course, every attack and animation looks just as outrageously stylish as 2016’s best JRPG did. Don’t be fooled though: combat in this game is HARD, and you can find yourself backed into a corner if you’re not used to the frenetic action that Musou games can muster. Don’t be afraid to bump down the difficulty if you’re unfamiliar and enjoy just decimating waves of goofy-looking enemies. And yes, Mara the chariot-riding phallus does return in glorious 3D once more, so you’ve got that to look forward to! Just don’t Google that one while you’re in mixed company.

All in all, I was surprised at just how well the Persona/Musou combo works. In the Persona series, combat always felt slow, tactical and specific – a game all about discovering and targeting enemies’ weaknesses to take them out before they can hurt you. These two studios have worked out how to make that same methodology work in a fast-paced action combat environment, while still feeling that same sense of mastery. The storyline feels like a true continuation of the 2016 title with characters represented accurately, unlike some past tie-in titles where the characterisation can become one-note. For fans of Persona 5 this is a great way to dive back in and get another helping of this excellent cast, and spend another few dozen hours looking at some of the most stylish UI in gaming.

Persona 5 Strikers is available from 23 February 2021 across Windows PC, PS4, PS5 and Switch. Those who pre-order the game’s Digital Deluxe version will gain four days of early access from 19 February 2021.

Persona 5 Strikers was reviewed using a PS4 promotional code on PS5, as provided by the publisher. Click here to learn more about Stevivor’s scoring scale.