Start your tiny little engines and get your steering finger ready to engage in some crazy racing action from Brisbane developers, The Binary Mill.

This isometric top-down racer is a welcome addition to the great library of iOS titles which seems to be dominated by 2D action and puzzle games. Mini Motor Racing has you competing in miniature cars (think: Micro Machines) around a series of cleverly designed — and very pretty, I might add — race tracks. Although there are only 11 circuits, staleness is kept at bay with the isometric angle being different for each iteration, as well as day/night/weather effects and reverse direction racing. This keeps the racing fresh over the 17 cups the game has to offer, each featuring between 4-20 races! There’s plenty of content to keep you entertained. 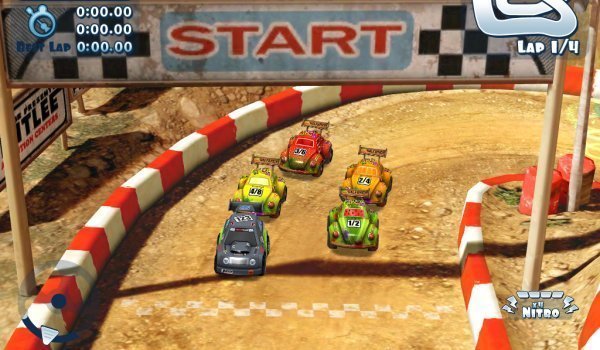 The racing itself has very enjoyable physics. Real enough to make sense and give some meaning to the car’s handling, but silly enough to make it fun! By deault, Mini Motor Racing is set to auto-accelerate which works fantastically. There’s no need to slow down for corners as your car will slide into them as appropriate. I found that turning on manual acceleration made me do worse — as it was one thing distracting me from actually winning. The Binary Mill have provided us with four different ways to steer. All work wonderfully and there’s a style to suit everyone. Most importantly, it really works on iOS and seems so natural.

There’s nothing unnecessary in these races. Steer the car well and weave ahead of the other drivers, negotiating the difficult turns. Tap to use a nitro boost, but they are limited so time them right. Occasionally nitro or cash bonuses will appear on the track, but you can’t rely on them. Being in the pack is mental, but once you’re ahead it’s not to hard to keep your lead if you stick to the track and anticipate corners. Simple and streamlined. 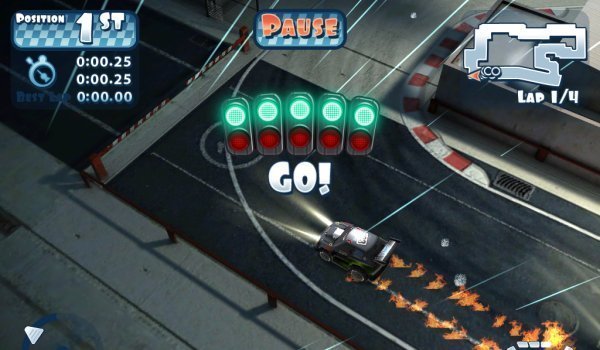 In career mode, you pick a car (you can change later), give it a spray of paint and get out there on the track. The rewards you reap from winning can be used to upgrade your car’s acceleration, handling, top speed and nitro. Alternatively, if you can hold onto the cash you can purchase new cars — I found it easier and cheaper just to pick one you like and upgrade it as you go as purchasing is prohibitively expensive, particularly near the start of the game when you’ll need to the upgrades to keep up.

That said, the first couple of rounds ease you into it before the quaint Fruit Ninja cup — featuring special tracks with Halfbrick’s classic music and sound effects as well as Fruit Ninja cars! — where the competition starts to become challenging. It’s no big deal if you have to retry a race; some of the tracks only take just over ten seconds per lap. Pick up your loser’s pittance and try again! 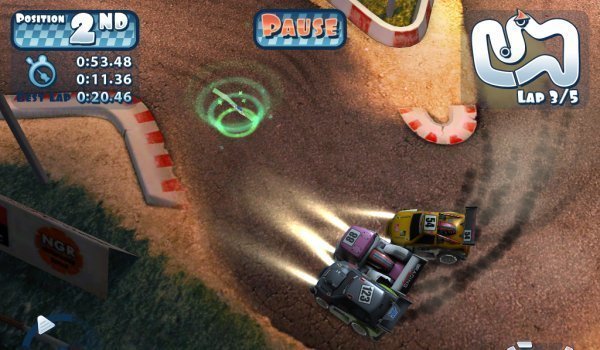 What would a fun racer like this be without some multiplayer action? Hook up with a mate in 2-player bluetooth play or up to 4 players over local Wi-Fi. Hopefully we’ll see some online multiplayer shenanigans in a future update.

I don’t really have any criticisms about Mini Motor Racing. The only thing that really annoyed me is that purchasing the HD version ($3.99 on the App Store) only lets you play it on the iPad, and you’ll have to fork out another $2 if you want it on your iPhone as well. It’s a superbly polished game, with amazing graphics and a killer soundtrack. You’d expect that maybe the loading times would kill it, but they’re pretty non-existent.