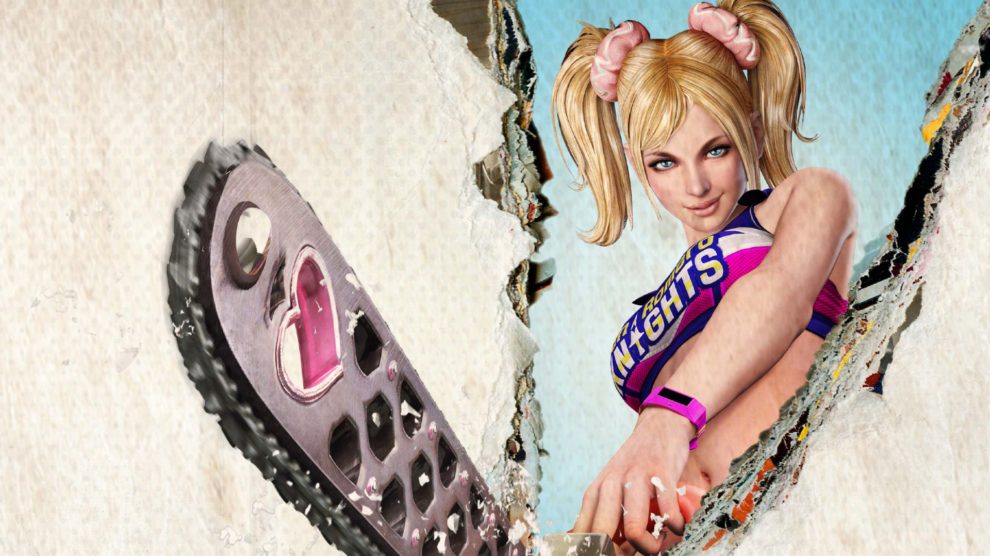 Suda51 unashamedly makes video games, in the purest and silliest sense. Lollipop Chainsaw is no exception. It’s ridiculous, over the top, sexist and a whole bag full of crazy, it’s also stupid amounts of fun.

I have attempted to play all of Grasshopper Manufacture’s games over the last few years, ever since Killer7 captured my imagination and became (and remains!) my favourite title on the Gamecube. While none of the subsequent releases from Grasshopper Manufacture and Suda51 have come to surpass my love for Killer7, some have come close. Lollipop Chainsaw is one of those titles. It’s far from perfect, is over way too quickly and occasionally gets on your nerves for the relentless dick and poop jokes…but, it’s so much fun from beginning to end that all flaws can be forgiven. 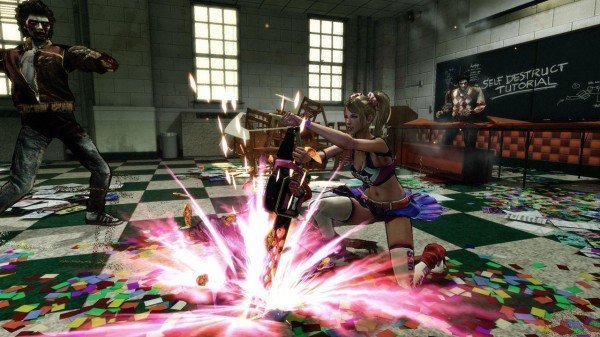 The game begins on the morning of Juliet Starling’s 18th birthday. She’s young, blonde, sexy, ditzy, she loves lollipops (hence the title) and she’s a cheerleader. Oh yeah, and she just happens to come from a family of zombie hunters! If that sounds like your kind of party….well, it gets better. Juliet’s weapon of choice is the titular chainsaw which sprays love hearts and rainbows as it endlessly hacks up the undead hordes invading San Romero.  Her boyfriend, Nick, is bitten during the opening cinematic and in order to save his life and prevent him from turning into one of the undead, Juliet performs some kind of dark zombie hunter ritual which lets him stay alive as a severed head attached to her belt.

Yeah, this game is nuts.

The underpinning theme of Lollipop Chainsaw is a mish mash of varying genres and styles that you wouldn’t think would necessarily gel together, yet they do. There’s a bit of rockabilly, some grindhouse, Americana, psychedelia and the like, all held together by rainbows, sparkles, bright colours and flashing lights. Some will find it an odd collection that doesn’t work, while others will find it jarring and irritating; others still will outright hate it, while the rest will find its bizarre quirkiness a breath of fresh air in a sea of recent releases that are all very serious business. 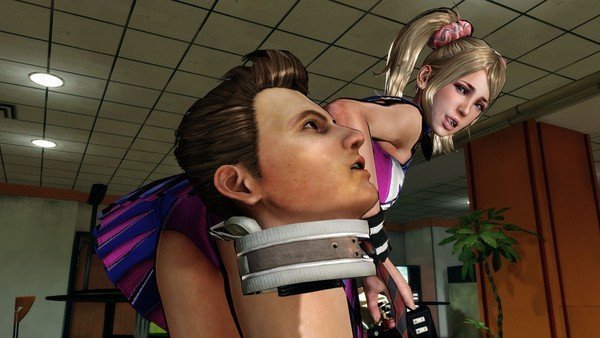 At its core Lollipop Chainsaw is a hack and slash adventure game. Juliet uses her chainsaw in a variety of combos accompanied by her pom poms, used for stun attacks. As you progress through the game’s 6 or so levels you unlock bigger and better combos and get birthday presents from Juliet’s family: attachments for your chainsaw that transform it into a gun or more. Nick’s head on Juliet’s belt isn’t just for company either as an array of special moves are unleashed by using the “Nick roulette” (yes, that’s right). Nick’s head can then be shot at zombies, or spun around on a lead like a flail taking out large groups of undead easily.

Juliet’s standard chainsaw attacks coupled with the pom poms are more than enough to get you through most situations and it’s usually only during boss fights that special attacks are even required. This comes as a double-edged sword. On the one hand it affords the player a huge amount of flexibility the play the game however they like, on the other hand though it can become quite a dull grindfest if you choose to play using only the minimally required move set. There is also a lack of variety in enemies and you will be facing the same kind of zombies for 95% of your playtime. Occasionally there is exploding or fire zombies but in general it’s the same weak hordes over and over again. The same rules apply though, if you so choose you can use all the tools provided to you and go to town racking up combos and creatively slicing and dicing zombies, or you can hit one button and get bored. 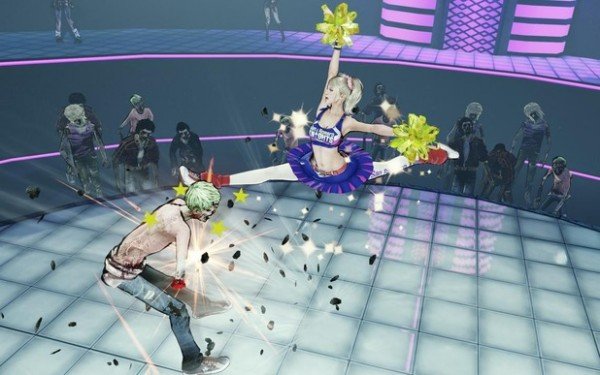 Lollipop Chainsaw is a short game, and can be completed in as little as 5 hours, but I don’t consider it to be a negative. It was designed for a specific length and is fun for the duration. I could imagine that being any longer and it would begin to overstay its welcome. Regardless, there is replay value in playing again at higher difficulties, collecting all of the lollipops scattered throughout the levels, competing in the online leaderboards and simply just to experience the fun and insanity of the game again.

It’s not a game for everyone, and honestly I can understand how it would rub people the wrong way, but for me Lollipop Chainsaw was one of the most purely fun games I have played in a long while. There is no pretentiousness, no message or attempt at dissecting the broader issues of the world , it’s a game for game’s sake. Go in expecting anything else and you will be disappointed, but boot it up when you need to turn off your brain, kill zombies and stare at pretty colours for a few hours and you’ll have a ball.