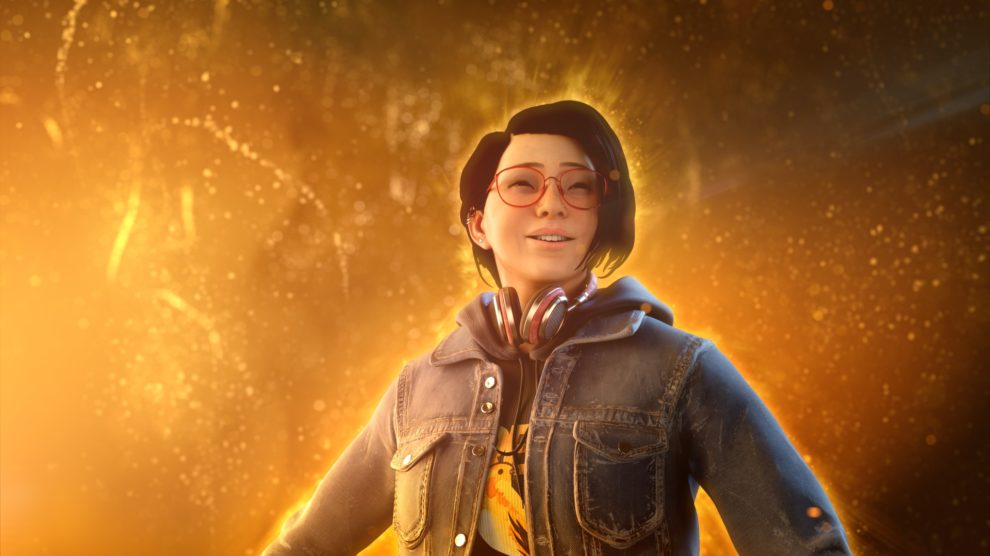 How does it feel?

With Life is Strange in the title, you know what you are getting with True Colors. You’ll step into the shoes of a young person and talk to some people, make a bunch of choices, sit and listen to acoustic tunes, look at objects while your character muses on them through an inner monologue, and get out of sticky situations with your superpowers. Familiar it is, but that doesn’t make it any less entertaining.

This time round you are Alex Chen, a young woman from a broken home whose formative years were spent in orphanages, struggling to live with being able to see and feel the emotions of others. Her solution was solitude, and much of True Colors is spent reckoning with her own emotional turmoil and finding a sense of belonging in Haven Springs, where she reunites with her long lost brother to start a new life. You’ll never believe it, but things go bad and Alex is ensnared in a sinister tale of small town secrets while confronting her own suppressed feelings and past.

Empathy doesn’t often come up as an answer to the “which superpower would you have?” question in Zoom team building sessions, but True Colors takes feeling feelings to interesting places. Like Daniel in Life is Strange 2, Alex doesn’t have great command of her power and much of her self-enforced social isolation has come from an inability to deal with experiencing the intense rage, grief, fear or sadness of those around her. As she learns to face her own emotions she gains better control, and these moments of empathy with the deepest feelings of others lead to some of the most haunting moments of True Colors. It’s representation of memory loss is striking, realisations of a child’s fear or a widower’s loneliness are equally enthralling. Sure there are some corny moments as well; you’ll get to play amateur mind reader on unsuspecting locals and become a matchmaker, or cheat a jelly bean counting contest, but when it comes to the big moments True Colors treats grief, fear, sadness and even elated joy with a reverent touch.

Like most titles in the genre, the illusion of choice and control is often at play here. Digging too deep into the permutations will expose the magic tricks, but True Colors does a good job of building and tracking relationships with its major characters and delivering a satisfying payoff to those interactions and giving meaning to the meandering. It also does well to structure its story in such a way that these spikes of supposed choice aren’t as high, where meaningful decisions are more “which one of my friends should seduce this lady as a distraction” than “should I let my brother kill someone”. It’s a lot easier to forgive the lack of real agency when the stakes are smaller. The story is solid and the characters likeable and well rounded. There is no genre-busting change to the well worn narrative formula, but the connections True Colors creates between you and its characters more than makes up for its lack of innovation.

True Colors does some of the best work in eliciting emotions that I have seen in games, and the incredible facial animations, particularly the character’s eyes, are doing a lot of the heavy lifting. The voice acting is excellent and dialogue in the series has come a long way from the hella weird days of the first game, but the camera direction and the confidence to use closeups and rely on eyes to convey feeling is a huge step forward. Tears are still a struggle, but as windows to the soul the eyes of True Colors offer a crystal clear picture. 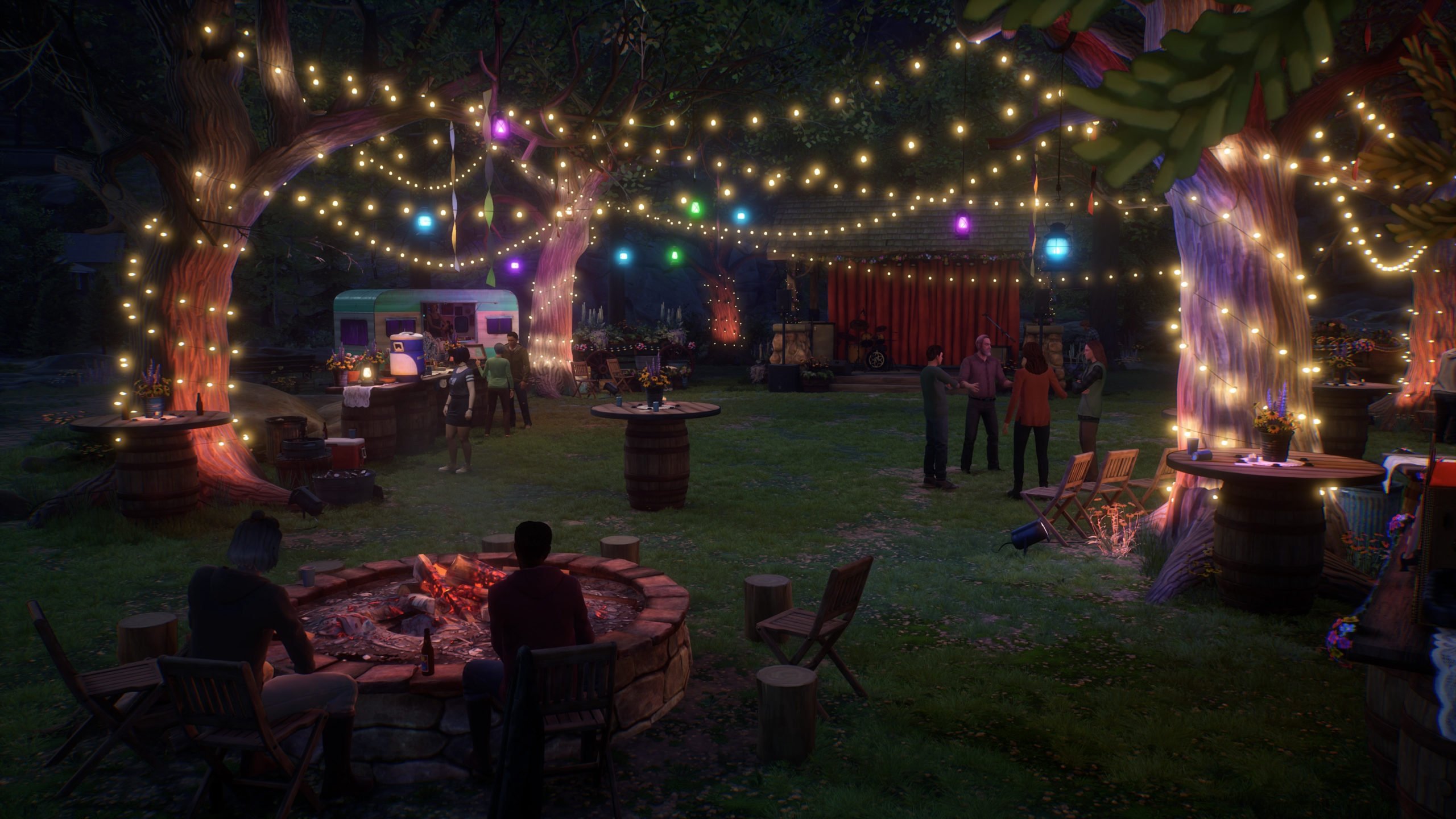 Haven Springs itself is a stunning locale, a quaint Colorado town straight out of a theme park “Colonial World”, perched aside an aquamarine lake nestled at the base of snow capped mountains. True Colors restrains itself to a moderate number of beauty shots, with Angus & Julia Stone (who nail the Life is Strange aural aesthetic) accompanying impossibly beautiful vistas as you sit on a bench, or a pier, or a rooftop, but there were many moments the scenery wowed me that weren’t carefully directed and matched to acoustic guitars. Interiors are treated with just as much love, from a bar decorated with quirky kitsch to a record store that felt immediately familiar, strewn with instruments and every inch of wall covered in posters and vinyls. The town itself is a character, and one that is easy to get attached to over five episodes of exploration.

Then you have the LARP. The midpoint of True Colors acts as an intermission of sorts, where empath investigations into shady dealings take a backseat to trying to cheer up a ten year old and Life is Strange turns into a turn based RPG. It’s simple, funny and light, interrupted just often enough by character moments and progression to keep you grounded to the story, and its climax is one of the highlights of the series. It’s a welcome ripple in a game that otherwise sticks close to the formula laid down over three prior titles.

If storytelling, emotions and choices aren’t your thing, you won’t find much in True Colors. Puzzles don’t venture much further than “walk around the room/park/town and investigate”, and the best story outcomes are usually earned by just “doing everything” to unlock superior dialogue options. You won’t even find staples of narrative experiences like quick-time events and on rails sequences in True Colors; whether that falls into the pro or con column is up to the individual. 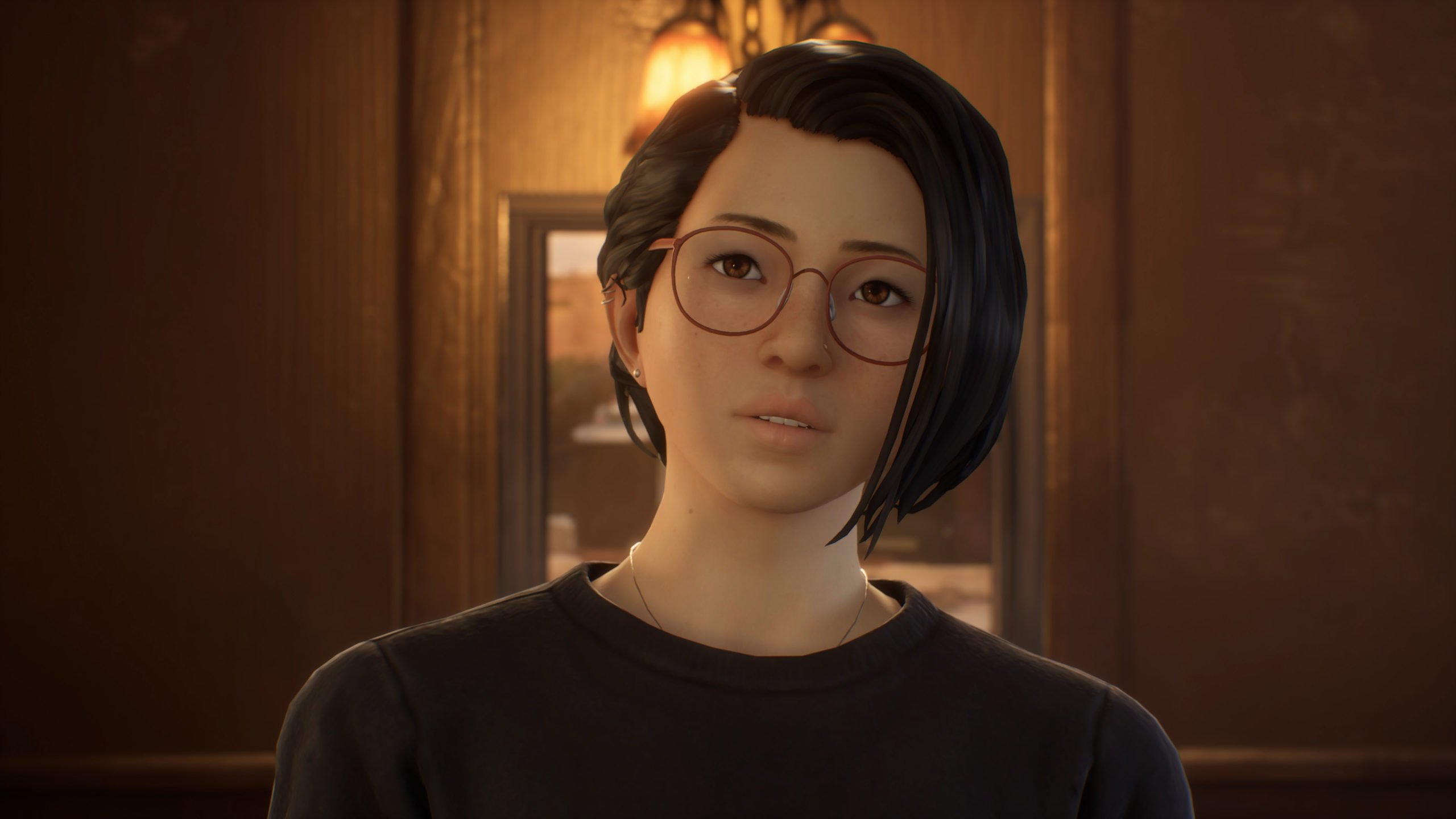 Any other gripes I have are minor. Performance on a base PS4 wasn’t the best, with occasional hitches and a sluggish framerate, though it never impacted gameplay. There were occasional clashes of tone between the events taking place and Alex’s inner monologue as she explores, and some plot elements require suspension of disbelief beyond just the existence of supernatural empath powers. Any romance options you may pursue feel whirlwind and a touch unconvincing, and I’ll leave judgment on how True Colors handles same-sex relationships and representation to those more qualified.

I loved my time in Haven Springs with Alex and her friends. For a relatively short and contained story with a small cast, True Colors mastered making me think I knew what was going to happen then delivering something different, without resorting to wacky hijinks or red herrings. The story of the closing acts stretches somewhat to tie it all together, but never enough to lose me.

True Colors is a fantastic narrative experience, filled with rich characters and taking place in a beautiful, enchanting world. It is heartfelt and at times powerful, touching on the nature of grief, loneliness and belonging. True Colors will delight fans of narrative games, but is unlikely to win over the doubters. You probably know if you’ll like this one, and I’m here to tell those people that they won’t be disappointed.

Life is Strange True Colors heads to Windows PC, Xbox One, Xbox Series S, Xbox Series X, PS4, PS5 and Switch from 10 September 2021. It also provides access to the Life is Strange Remastered Collection, which follows on those same platforms in 2022.

Life is Strange True Colors was reviewed using a promotional code on PS4, as provided by the publisher. Click here to learn more about Stevivor’s scoring scale.