If anything has stood the test of time, it’s Lego. The combination of a simple interlocking brick system and a load of imagination has entertained generations and will surely do so for generations to come. That being said it’s hardly a surprise that Lego has made it past being just a plastic brick and onto television and videogames. Steering away from the movie and comic tie-ins of the past, Lego City Undercover represents a long running retail brick set and brings it to life.

Lego City Undercover revolves around police officer Chase McCain’s return to Lego City, after a plea from the Mayor, who, due to a crime wave gripping her city, is beside herself. Using a series of disguises, each with its own special abilities, Chase infiltrates a crime syndicate, climbing his way up through the chain, to ultimately track down a nemesis he help put away years ago. Throw in a love interest, a bumbling side kick and a belle with a brain at police HQ and you have a Lego game like no other. 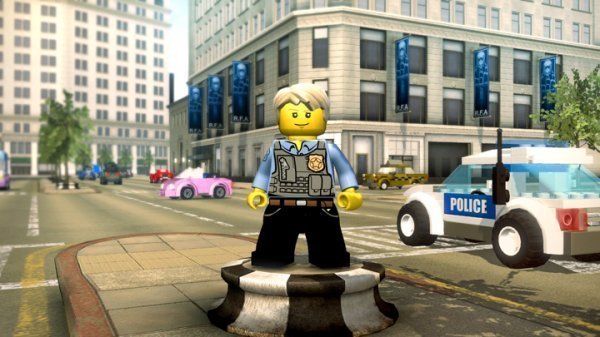 There is no doubt that there are two ways to play through Lego City Undercover: break everything or break just enough to get you by. Previous Lego games have had players collecting round Lego Studs, as a way of scoring, but this time around there is also the requirement to collect Lego bricks.  Various brick shapes have differing values and gathering these will fund Super Builds located around the Lego City map. Some of these builds are purely for aesthetics, while others, like call-in points for Lego vehicles which you have unlocked, are a necessity. Although townsfolk will hand over their vehicles, with hardly an argument, if you blow your police whistle and flag them down. Most vehicles steer terribly, so although persistence and practice can be a benefit, the limitless supply of cars around Lego City will certainly be of some use.

The Nintendo WiiU GamePad is used extremely well, posing as a multifunction tool throughout the game. As a communication device, it not only connects the player back to Ellie, a helpful fellow officer at Police Headquarters, but also acts as a video phone, used with different people throughout the course of the missions Chase embarks upon. Many other uses are revealed as the game progresses, such as a camera, a listening device and a UV tracer. Controlling Chase is easy with the WiiU GamePad, but it is the way he interacts with his environments that can sometimes cause concern. 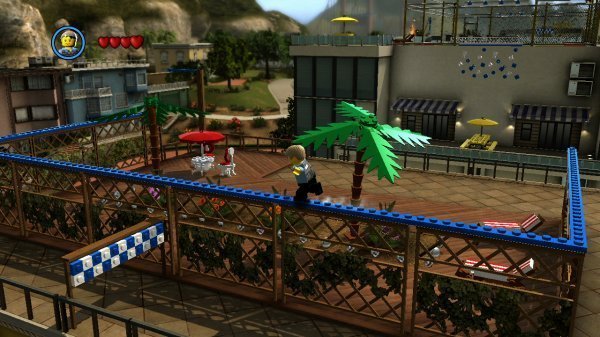 With one of the main tasks being the gathering of bricks for Super Builds, it can be quite frustrating when getting caught behind freshly destroyed objects and waiting for them to disperse to reveal the required items. As with the Lego studs, the Lego bricks disappear quickly, so collecting them promptly is a must and anything in your way can be a major hindrance.

Unlike the linear Lego games of the past, the adventures of Chase McCain takes part across an open world, containing environments and items both breakable and not.  Lego City is enormously expansive, with commuting across it available by numerous transport modes. It’s not just what you are asked to do during your missions as Chase McCain, but what is available to do all throughout the game that quite possibly makes Lego City Undercover the most involved title currently available on the WiiU. A player could easily spend hours roaming the streets and waterways of Lego City and uncovering a multitude of tasks to perform and obtaining every last possible brick.

If you don’t play Lego City Undercover for the game play, play it for the story. The script is extremely well written, highly entertaining and is absolutely dripping in humour, both verbally and visually. Overall it’s a very corny, tongue in cheek poke at the TV cop shows of the 70s and 80’s with the characters are well voiced and styled exactly as you would expect. This is let down by some poor audio layering. At multiple points during the game the background and ambient audio is greater than the vocal audio, making the sub-titles option a must. There are also cameos galore to keep an eye out for, some intended and some (apparently) not.

When a game like Lego City Undercover plays so well, it’s a huge shame that woefully long loading times between chapters put such as dampener on it and destroy what flow it has.  From the time you choose Lego City Undercover from the Wii U menu on start-up and then select your save game file and wait for that to load you’ve lost well over three minutes. This is even after the screen tells you that your save file has loaded successfully! That’s a long time when all you have to do to pass the time is listen to a bongo infused, wah-pedal laden, cop show theme soundtrack and watch a spinning Lego police badge. 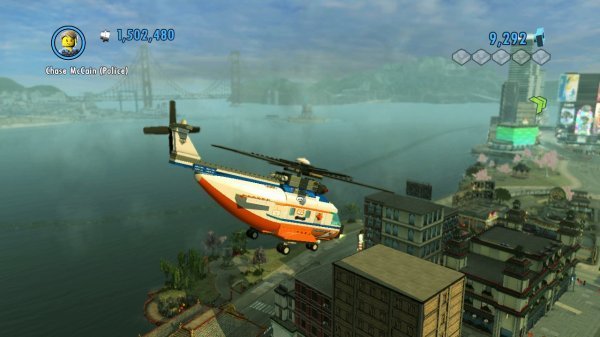 Just because it’s a Lego game certainly doesn’t mean that it’s directly aimed at kids, in fact it quite the opposite. Some tasks require a little more thought than others and to access certain areas does rely on more than a basic level of skill. Lego City Undercover should certainly get some mileage from gamers of all ages.

As we wait patiently for the Wii U game catalogue to expand in numbers, there’s no real reason why Lego City Undercover shouldn’t become a part of your Wii U library. Just the sheer volume of gaming to be had with this title is value for money in itself and the entertainment factor can’t be denied. With all those ticks in the positives column, it should be easy to overlook the few minor problems that present themselves. The “Lego in video games” concept is nothing new at all, but placing it on an open world stage certainly breathes new life into the franchise.